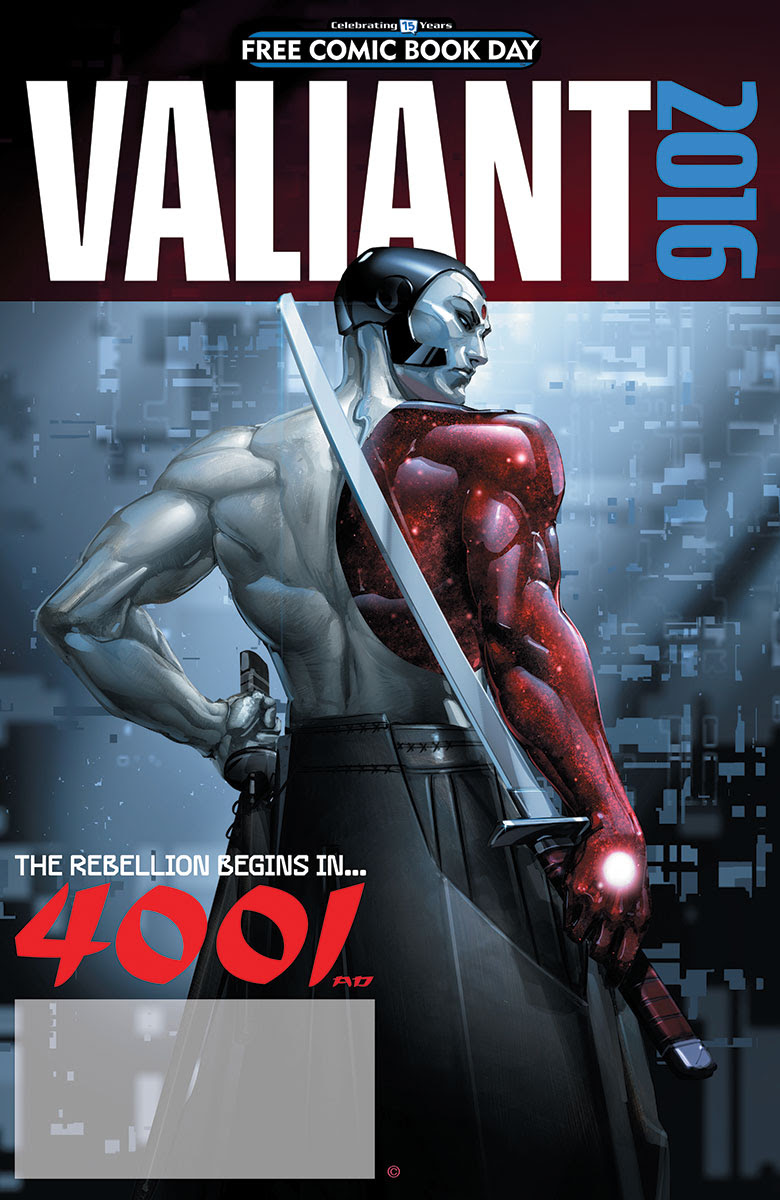 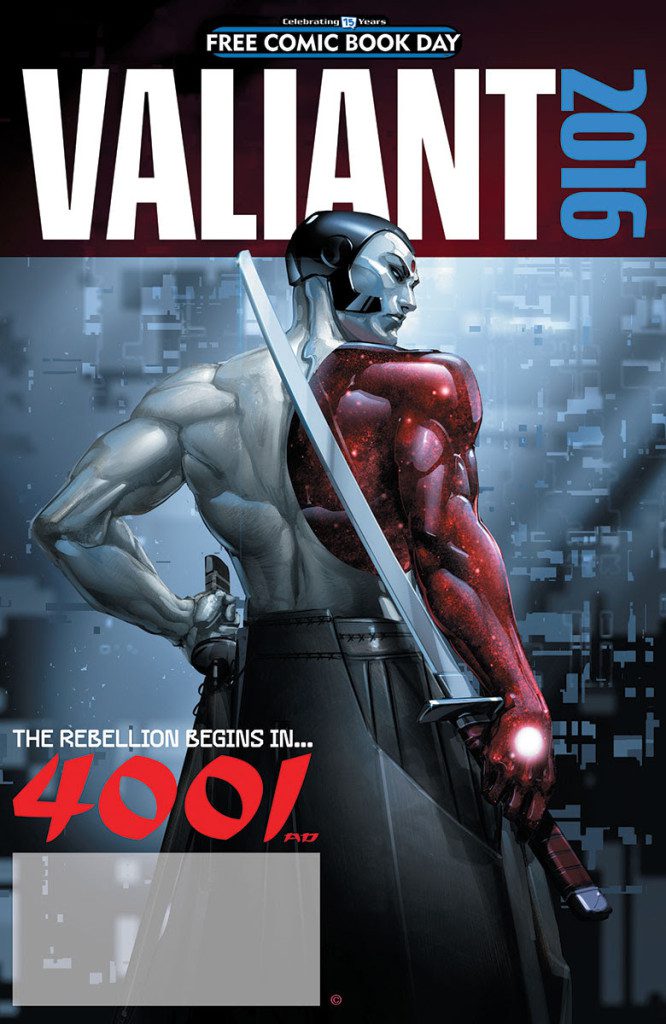 In the tradition of BOOK OF DEATH, ARMOR HUNTERS, and HARBINGER WARS, Valiant is proud to announce its most ambitious crossover event yet: 4001 A.D.! Beginning with an all-new prologue in the pages of the VALIANT: 4001 A.D. FCBD SPECIAL on Free Comic Book Day 2016, the forces of the future unite behind the fallen guardian of New Japan, Rai, in 4001 A.D. #1 (of 4) – the FIRST ISSUE of an all-new, four-issue event series from New York Times best-selling writer Matt Kindt (NINJAK, DIVINITY, Mind MGMT) and superstar artist Clayton Crain (RAI, X-Force)!

“The year 4001 has always been a vital component of the Valiant Universe but, now, for the first time, we’ll finally be pulling back to reveal the true scale of this world and the wildly diverse cast of heroes that inhabit it,” said Valiant Editor-in-Chief Warren Simons. “Matt Kindt and Clayton Crain have pushed themselves to design a story that is positively brimming with crazy-mad energy, continent-sized ideas and unthinkable potential. From cosmic beings and sentient cities to post-apocalyptic warrior kings and cybernetic samurai, 4001 A.D. will see the Valiant heroes pushed beyond the threshold and into territory far beyond anything we have ever attempted before.”

“Over the past two years, Matt and Clayton have defied all expectations with their epic and acclaimed work on RAI. Now, they’re expanding that vision to include not just one hero, but dozens for a James Cameron-meets-Jack Kirby vision of Valiant’s future and RAI’s incredibly important place at its epicenter,” said Valiant CEO & Chief Creative Officer Dinesh Shamdasani. “As always, everyone at Valiant – from our writers to our artists to our editorial team – is challenging themselves to ensure that 4001 A.D. lives up to Valiant’s growing reputation for creating the highest-quality and most accessible event comics anywhere in the industry today.”

One hundred years from today, Father – the benevolent artificial intelligence that governs the island nation of Japan – will gain sentience. To defend its borders, Father will take drastic action by launching Japan into space…where its people can thrive in isolation, away from the overpopulated and resource-deprived planet below. Over the centuries, as New Japan orbits our increasingly unstable world, it will become a model society – one built on peace, prosperity…and Father’s control.

A thousand years from today, Father will create the first Rai, founding a lineage of technologically enhanced heroes engineered to defend New Japan and sworn to protect it from all enemies. For hundreds of years into the future, the Rai will single-handedly enforce New Japan’s justice well…and serve Father without question.

Now, at the dawn of 4001 A.D., the latest Rai is about to inherit the dark truth behind the origin of his kind…and discover the sinister secret at the heart of Father’s existence. For New Japan to live, Earth must die…and as Rai challenges his former master for the first time in more than a millennium, the lone guardian of New Japan will be cast out of his own Father’s kingdom…

Exiled from the only realm he’s ever known, Rai now walks the ravaged world of 4001 A.D. in search of forgotten heroes like himself…on a mission to collect the last surviving legends of a broken planet…and to forge a rebellion with the power to bring the most advanced civilization in history crashing back down to Earth.

In the wake of Free Comic Book Day 2016, 4001 A.D. #1 (of 4) kicks off Valiant’s landmark crossover event of the New Year in May 2016! Then, the war on New Japan will spread with the return of RAI’s own titular ongoing series and glimpses of the other heroes of 4001 A.D. in a new series of one-shots throughout the summer. Further details on more 4001 A.D releases will follow in 2016.

Next summer, the future of the Valiant Universe looms large with an all-new entry point into the most acclaimed publishing line in comics, only in 4001 A.D. #1 – coming in May from Valiant superstars Matt Kindt and Clayton Crain!

Plus: Don’t miss a never-before-seen prelude to the blockbuster comics event of the summer in the VALIANT: 4001 A.D. FCBD SPECIAL as Rai’s crusade to save the future from itself starts here with an all-new story from Matt Kindt and Clayton Crain! Then, the biggest Free Comic Book Day release of the year continues with exclusive looks inside Valiant’s next can’t-miss milestones, including A&A: THE ADVENTURES OF ARCHER & ARMSTRONG #1 by rising star Rafer Roberts and comic book superstar David Lafuente, and DIVINITY II #1 (of 4) by New York Times best-selling writer Matt Kindt and blockbuster artist Trevor Hairsine!