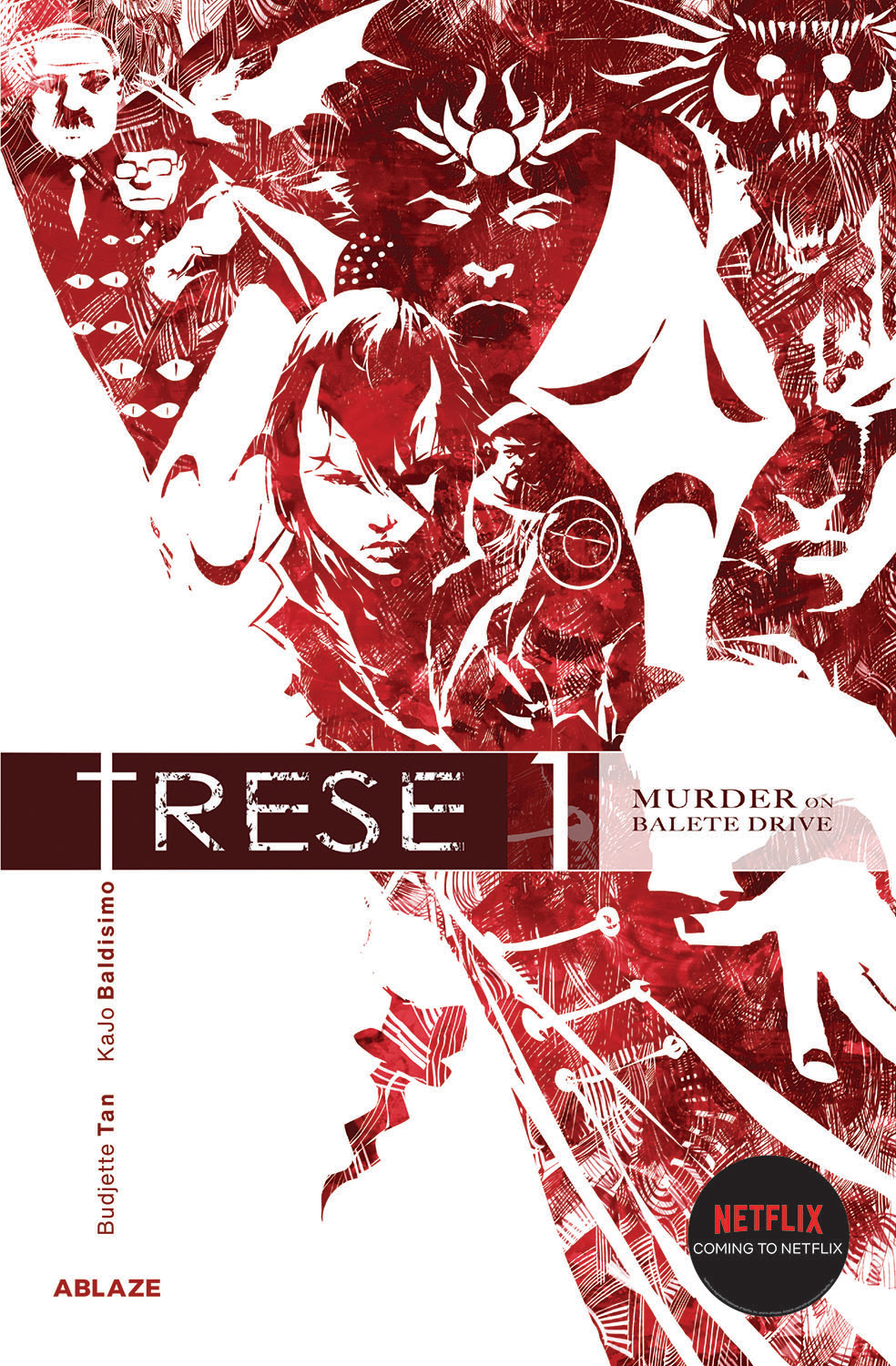 ABLAZE is proud to help celebrate Filipino American History Month this October with “TRESE” comic book creators Budjette Tan and Kajo Baldisimo! Which will soon also be an original anime series on Netflix.

ABLAZE is now happy to announce that TRESE Vol 2: Unreported Murders TP is set for publication in April 2021.

When dusk arrives in the city of Manila, that’s when you become the most likely prey of the underworld. Kidnappers and thieves will be the least of your worries.

TRESE is inspired by stories from Filipino folklore, featuring creatures from Philippine mythology; given a modern-day twist as they are told through the lens of a detective story. The creators of TRESE hope that their stories can become a gateway for the new generation of Filipino Americans to learn more about their culture and lore.

As previously announced, ABLAZE will be bringing TRESE to English readers worldwide in a series of graphic novels, starting with TRESE Vol 1: Murder on Balete Drive TP this November (on-sale Nov 4th for direct market, Nov 17th for  book market).

Beware the criminals that can’t be bound with handcuffs nor harmed with bullets.

When crime takes a turn for the weird, the police call Alexandra Trese.

“Unreported Murders” contains four mysteries for Alexandra Trese to solve; including a murdered dwarven-creature, a police station held under siege by the undead, an elusive serial killer living in the sewers of the city, and an unassuming gated-community that’s willing to pay the price to live the privileged life.

As with Volume 1, all the stories in TRESE Vol 2: Unreported Murders feature updated/re-mastered artwork, and a substantial bonus section about the monsters of Philippine myth, as told by its creators Budjette Tan and Kajo Baldisimo!

Writer Budjette Tan: “When my cousin from California visited us in Manila back in the 90s, he became fascinated with our stories about the aswang, duwende, and tikbalang. Years later, I sent him a copy of the original draft of TRESE and enjoyed our stories as well. I feel that our myths and folktales are truly fascinating and it’s something we can proudly share with the world.”

Artist Kajo Baldisimo: “I believe that Philippine myth, same as with other aspects of her culture like music and cuisine, is globally underrated because us Filipinos want it that way. Rather than shove it upon the world, we prefer that you discover it on your own and hopefully be surprised by it. If you don’t like it, we’ll proudly keep it to ourselves but If you love it, we’ll gladly give you more. So much more.”

ABLAZE Co-Founder & VP Creative/Biz Dev Rich Young: “I’m learning more and more about Filipino myth and folklore through Budjette and Kajo, and by ABLAZE publishing TRESE.  It’s sometimes creepy, but always interesting…and very happy that we are helping expose the culture and lore to those that may not yet be familiar with it.”

Look for more details around TRESE Vol 2: Unreported Murders in the coming months.

The book is available for preorders now through your favorite book store or online book seller, and digitally via Comixology.

Netflix is currently producing an original anime series for TRESE, set in a Manila where the mythical creatures of Philippine folklore live in hiding amongst humans, and detective Alexandra Trese finds herself going head to head with a criminal underworld composed of malevolent supernatural beings.  Jay Oliva (Wonder Woman, The Legend of Korra) will serve as Executive Producer and Director for the series, and Shanty Harmayn and Tanya Yuson at BASE Entertainment, a studio based in Jakarta and Singapore, are attached as Executive Producers.

TRESE is also a three-time winner of the Philippine National Book Award for Best Graphic Literature of the Year (2009, 2011, 2012).

For updates, previews, and details on upcoming titles from ABLAZE and more on TRESE, visit http://ablazepublishing.com/