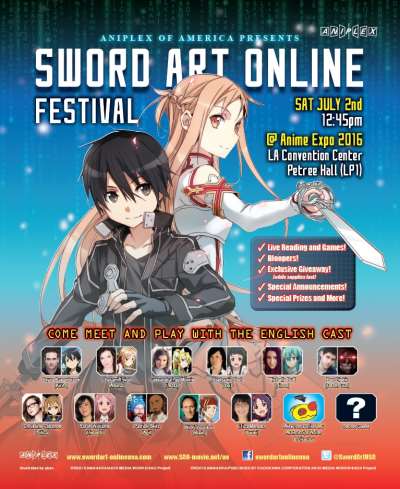 (By Staff Reports)– Aniplex of America is proud to announce that they will be hosting the Sword Art Online Festival at this year’s Anime Expo to celebrate the worldwide release of Sword Art Online The Movie -Ordinal Scale- in 2017.

This exclusive event will be on July 2nd , 2016, (Day 2 of the convention) in Petree Hall (Live Programming 1) and features 11 members of the English
dub cast from the series including: Bryce Papenbrook (Kirito), Cherami Leigh (Asuna), Cassandra Lee Morris (Leafa), Stephanie Sheh (Yui), Michelle Ruff (Sinon), Ben Diskin (Death Gun), Christine Cabanos (Silica), Sarah Williams (Lisbeth), Patrick Seitz (Agil), Kirk Thornton (Klein) and Erica Mendez (Yuuki) along with Alex von David (ADR Script Writer/Director) as the MC. Aniplex of America has also confirmed that they will be welcoming some secret guests who will only be revealed at the event.

Similar to last year’s KILL la KILL English Cast Panel hosted by Aniplex of America, Sword Art Online Festival will feature a wide variety of live entertainment by the cast members, such as live line readings, games, and bloopers. Fans who attend the event will also receive an exclusive giveaway item while supplies last. Details of the giveaway item will be announced at a later date.

“We are excited to bring the Sword Art Online Festival to the fans at this year’s Anime Expo,” says Hideki Goto, President of Aniplex of America. “Every year, our English cast panels are extremely well received by the attendees so we really wanted to wow them this year with a super-charged version of the panel.”

About Sword Art Online The Movie -Ordinal Scale-:
In 2022, the world of virtual reality was turned upside-down by the emergence of a new invention called NerveGear created by the genius programmer Akihiko Kayaba. For the first time ever, NerveGear realized the full-dive functionality and with it, came endless possibilities for VRMMORPGs. In 2026, a new device called Augma was created to compete against NerveGear and its successor, Amusphere. Augma is a next-gen wearable device that omits the full-dive functionality possessed by its predecessors.

Instead, it utilizes augmented reality to get players into the game. It is safe, user-friendly and lets users play while maintaining consciousness, making it an instant hit on the market. The most popular game on the system is “Ordinal Scale” (aka: OS), an ARMMORPG developed exclusively for Augma. Asuna and the gang have already been playing OS for a while by the time Kirito decides to join them. They’re all about to find out that Ordinal Scale isn’t all fun and games…

About Anime Expo
Anime Expo (AX) brings together fans and industry from Japan, the US, and all over the world for the
largest celebration of Japanese pop culture in North America. Anime Expo features the best in Japanese
entertainment, music, fashion, and video games. For more information, visit www.anime-expo.org.

About SPJA
SPJA is a non-profit organization dedicated to popularize and educate the American public about
Japanese entertainment and pop culture, as well as provide a forum to facilitate communication between
professionals and fans. For more information, please visit www.spja.org.
www.AniplexUSA.com
www.facebook.com/AniplexUSA
www.twitter.com/aniplexusa
www.Youtube.com/AniplexUS
twitch.tv/aniplexusa