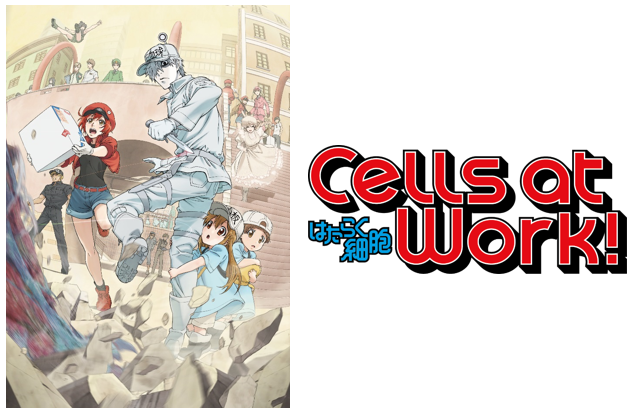 Aniplex of America announced today on their Aniplex Live! show on Facebook that the highly anticipated summer anime series, Cells at Work!, will be premiering on Crunchyroll, the world’s largest destination for anime and manga in the world, on July 7th at 9:30 AM PDT. The series is an anime adaptation of a popular manga by Akane Shimizu from publisher Kodansha’s Monthly Shonen Sirius. Cells at Work! takes viewers to an interesting world featuring anthropomorphized cells as blue collar workers hard at work within the human body. Throughout the series, the workforce, which includes characters like red blood cells, white blood cells, killer T-cells, macrophages, and platelets, must deal with the many perils brought about by constant bacterial invasions. The anime series features a super star voice cast which includes Tomoaki Maeno (Katsugeki TOUKEN RANBU, BLEND-S), Kana Hanazawa (Nisekoi, Blue Exorcist), Daisuke Ono (Black Butler, Jojo’s Bizarre Adventure), Ayako Kawasumi (Fate/stay night [Unlimited Blade Works], Fate/Zero), Saori Hayami (The irregular at magic high school, Sword Art Online), and Yuichi Nakamura (Durarara!!, Oreimo). Anime powerhouse david production, who’s work on Jojo’s Bizarre Adventure and ERASED received much acclaim from both fans and critics, will be handling the animation production for the series with Kenichi Suzuki (Drifters) serving as director. Series composition will be handled by Yuko Kakihara (Persona 4: The Animation, Digimon Adventure tri.) and character design by Takahiko Yoshida from Honey and Clover and Oreimo2.

Aniplex of America recently announced that they will be hosting a special Cells at Work! panel at Anime Expo 2018 in Los Angeles, California with special guests including voice actor Tomoaki Maeno, who plays the brutally vicious towards his enemies yet kind hearted to his peers White Blood Cell (Neutrophil). Along with the cheery and inexperienced Red Blood Cell, played by Kana Hanazawa, Cells at Work! takes a comical and action packed look into the epic, microscopic battles that happen within our body. Rebecca Silverman of Anime News Network writes about Cells at Work!, “it’s the most fun you’ll have in biology lessons since that one kid figured out how to make the dead frog twitch on the dissecting table.”

About Cells at Work!:
This is a story about you. A tale about the inside of your body…

According to a new study, the human body consists of approximately 37 trillion cells.

These cells are hard at work every day within a world that is your body. From the oxygen carrying Red Blood Cells to the bacteria fighting White Blood Cells,

Get to know the unsung heroes and the drama that unfolds inside of you!

From the popular manga “Cells at Work!” comes a brand new anthropomorphized anime TV series! It’s the oddly relatable and interesting story that is the life of cells!

Additional information on Cells at Work! will be available at: www.cellsatwork-anime.com and the official Cells at Work! USA Facebook page at facebook.com/CellsAtWorkUSA.