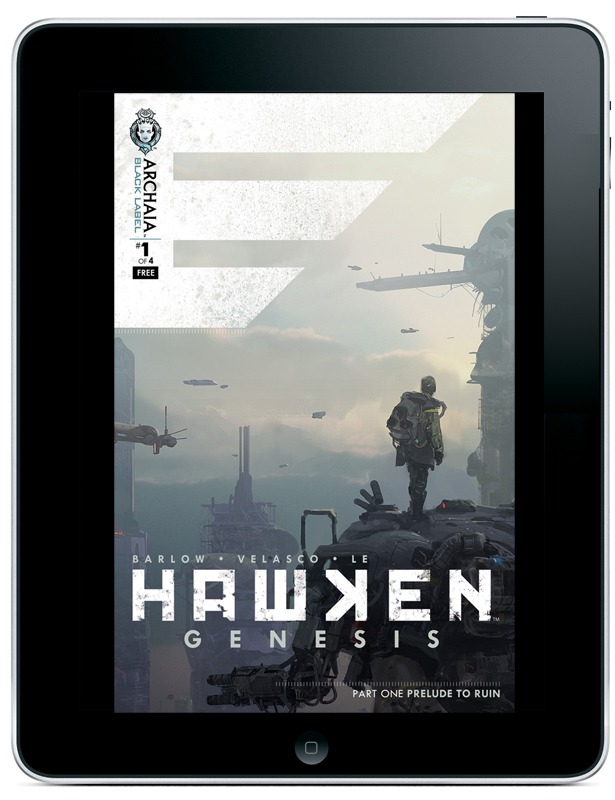 Archaia Entertainment, the publisher of such awesomeness as Okko, Mouse Guard and Jim Henson’s Tale of Sand among tons more, has partnered with Meteor Entertainment to produce some brilliant preview issues based off Meteor’s upcoming PC title, Hawken. The full Original Graphic Novel for Hawken doesn’t hit until March, but the first preview is available now on Comixology!

Check it out HERE and check out the official press release below!

The HAWKEN: GENESIS full-length graphic novel arrives March 2013 and will be published by Archaia Entertainment. This hard-hitting OGN establishes and explores the exciting world of Illal, the backdrop for the HAWKEN video game universe. Developed alongside Khang Le (Project Offset, Flight), the game’s Creative Director and lead conceptual designer of Adhesive Games, and featuring the talent of some of the industry’s top conceptual artists, comic illustrators, and painters, HAWKEN: GENESIS is both a prequel and sourcebook to the epic warfare players will experience firsthand in the HAWKEN video game. Readers will get an amazing look at the vast post-apocalyptic mythology behind HAWKEN and follow the stories of the pivotal individuals that determine Illal’s fate!

“Adhesive Games and Meteor Entertainment have developed such a unique and enticing war-torn future,” said Wes Harris, Meteor’s Vice President, Transmedia Publishing. “This digital release is a great way to expand our transmedia partnership with Archaia through comiXology while providing great opportunities for our fans to get access to the closed beta of the game.”

“Exploring the origin of that war and the dynamic, powerful personalities that set the political drama in motion was as exciting to create as it is to read,” added Jack Cummins, President & COO of Archaia. “We’re thrilled to premiere this material in digital form through comiXology and can’t wait to release the full graphic novel for eager HAWKEN fans.”

The first exclusive comiXology digital preview, “Prelude to Ruin,” is written by Jeremy Barlow (Mass Effect, Star Wars) and illustrated by Francisco Ruiz Velasco (concept artist on The Hobbit, Pacific Rim, and Hellboy 2). It can be accessed at this link: http://cmxl.gy/HawkenGenesis-1.

HAWKEN is the award-winning, multiplayer, first-person-shooter (FPS) game for PC published by Meteor Entertainment. HAWKEN puts players in the pilot seat of a futuristic war machine. Going into open beta on 12.12.12 (December 12th), players can customize and upgrade their mechs from a wealth of accessories and styles. Players can then join their friends on the battlefield to rain destruction across HAWKEN’s beautiful and immersive landscapes. And most exciting of all, HAWKEN is FREE-TO-PLAY. Players can visit www.PlayHawken.comto register.

Three more exclusive digital previews will premiere monthly only through comiXology, and ultimately leading to the hardcover’s release this March.

About Archaia Entertainment, LLC
Archaia is a multi-award-winning graphic novel publisher with more than 75 renowned publishing brands, including such domestic and international hits as Mouse Guard, Jim Henson’s Tale of Sand, Return of the Dapper Men, Rust, Bolivar, Gunnerkrigg Court, Old City Blues, Awakening, The Killer, Tumor, Syndrome, Artesia, and an entire line of The Jim Henson Company graphic novels such as The Dark Crystal, The Storyteller, and Fraggle Rock. Archaia has built an unparalleled reputation for producing meaningful content that perpetually transforms minds, building one of the industry’s most visually stunning and eclectic slates of graphic novels. Archaia was named Graphic Novel Publisher of the Year by Ain’t it Cool News, Comic Related, and Graphic Policy, which honored the publisher two years in a row. Archaia was honored with nine 2011 Eisner Awards nominations and two Awards for Best Graphic Album and Best Anthology. In 2012, Archaia has been further honored with six Harvey Award nominations, two Harvey Awards, six Eisner nominations and three Eisner Awards, and both Gold and Silver awards from ForeWord Reviews. In addition to publications, Archaia has successfully emerged as a prolific storyteller in all facets of the entertainment industry, extending their popular brands into film, television, gaming, and branded digital media. For more information, visit the Archaia website at www.archaia.com.

About comiXology
Founded in 2007 with the mission of bringing comics to people everywhere, comiXology has revolutionized the comic book and graphic novel world. With the development of the comiXology digital comics platform—with buy-once, read-anywhere availability across iPhone, iPad, Android, Kindle Fire, Windows 8 and the Web—comiXology provides the easiest way worldwide for people to enjoy comics anywhere they happen to be! Regularly ranking as the top grossing iPad app in the entire iTunes App Store, comiXology is one of the leading drivers of the iPad economy. Providing the most digital comics on the most devices, comiXology will not stop until everyone on the face of the planet has been turned into a comic book fan.