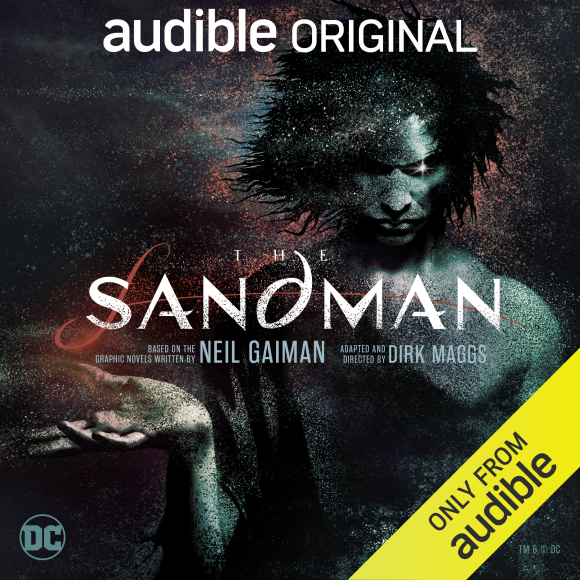 I love The Sandman. The iconic, groundbreaking series from Neil Gaiman introduced the world to the Endless, including the man himself- Morpheus, also known as Dream. The comic books and graphic novel collections are hailed as some of the most epic stories in comic book history. Now, thanks to Audible, we get to experience the stories in a whole new way with a fantastic voice cast.

Clocking in at just under 11 hours, we go through the first few story arcs from The Sandman’s storied history. Narrated by the author Neil Gaiman, this version transports you to a world of dreams, nightmares, monsters, heroes, and more, all in an amazing audio production. The book kicks off with Morpheus (James McAvoy), trapped on Earth by a power-hungry mortal looking to harness death. Stripped of his powerful tools and dignity, we see the Dream Lord go on a journey of revenge, retribution, and self-discovery. In his journies, he comes across a surly master of the occult in John Constantine (Taron Egerton), members of the Justice League International, the villainous Doctor Destiny (William Hope), and even goes to Hell for a visit with Lucifer himself (Michael Sheen).

The stories span to other members of the Endless, like the quirky Death (Kat Dennings), who nails it as the most feared member of Morpheus’s family. But it is Dream himself who steals the show: McAvoy owns the role of Morpheus. His delivery, emotion, range from calm and peaceful to a God-like being full of wrath, he is the Dream Lord fans have been waiting for all of these years. Some stories get incredibly graphic, like when Doctor Destiny takes over a diner, when evil descends onto a small hotel, and when we see the mistreatment of a muse by the monsters of man.

Adapting the stories told years ago, modern-day to them is not modern to what the listener is hearing. But that is perfectly fine. The story transports you to a different realm every time, and gives DC Comics fans some remarkable appearances, like Mister Miracle, Martian Manhunter, and the original Sandman, Wesley Dodds. Plus, we hear the madness of Arkham Asylum and the amazement of the Dreaming, the land ruled by Morpheus himself.

What The Sandman does best is dive into the hard questions: like how we see the humanity is far more monstrous than the nightmares we have, how Death is always around us, how powerful a dream can be, and how life weaves its story throughout history, tying together the stories from the beginning to the end. I am amazed at how this audiobook turned out, being that it is adapted from the incredibly visual comic book medium. But the story sounds like it was made just for audio, it’s that good. My favorite audiobook in 2020 so far, The Sandman is a journey you won’t regret taking.