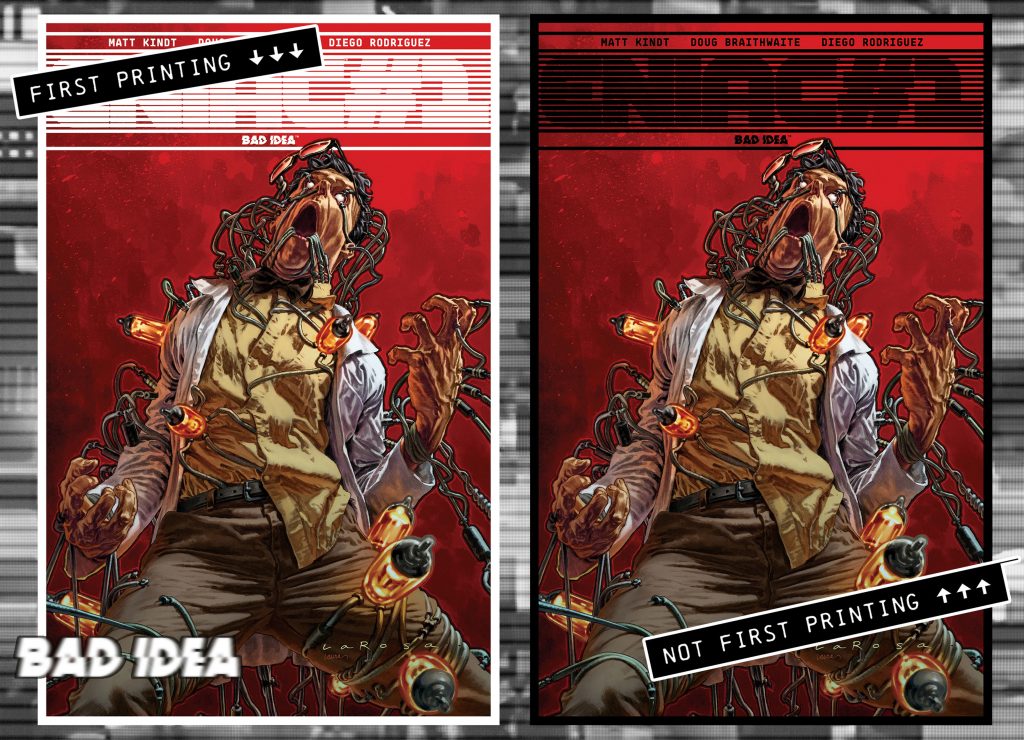 BAD IDEA is not only proud to present a reconceptualization of the comics form, but is also filled with a conceited sense of self-importance at having made what we are certain will be regarded as the greatest disrupting, innovating, trans-mediafying modernization of comics since Max Gaines himself folded the Sunday funnies in half and stapled-into-being the first comic book.

No longer will lovers of comics have to suffer through the agony of a hot book (or a book trying real hard to convince people it’s hot) announcing wave after wave of new printings. Second, Third, Fourth, Fifth, even Sixth printings…is nothing sacred? Never-ending variants! By the power of Kirby Krackle, I condemn thee.

And why? For time immemorial, comics has operated on the fundamental assumption that there is some legal rationale that publishers have to abide by when labeling their new printings. We at BAD IDEA say ENOUGH. No expense was spared in assembling the potential cost of potentially hiring the crack team of legal experts needed to potentially confirm our purely gut instinct that we could just do this and suffer potentially no consequences.

Read this next part slowly, it’s experimental genius is worth savoring, like fresh ramen.

That’s right, BAD IDEA can and will issue new printings that are indistinguishable from each other. The only exception is the actual First Printing, which will feature a subtle cover color change, a clear First Printing slug in the UPC and will be labeled in the indicia.

Goodbye, new printing variants. Hello, BAD IDEA SIMPLICITY™. Remember, the BAD IDEA way also means no variants, no trades, no digital, select stores and no more than two comics a month – just monthly comics, sold in comic book shops. And now, when our First Printings are all gone, you can take comfort knowing that you’ll still be able to get ahold of a NOT FIRST PRINTING to read without having to pay variant prices.

Interested in finding out more about BAD IDEA and our insanely rational plans to take over comics one shop at time? You’ll want to start with ENIAC #1 – the much-anticipated FIRST ISSUE spectacular and 48-page debut of BAD IDEA from Matt Kindt, Doug Braithwaite, and Diego Rodriguez. Landing in select comic shops around the world on March 3, 2021, it’s down to two covert operatives to save the 21st century from the 20th century’s greatest secret: ENIAC (Electronic Numerical Integrator and Computer) – a government-sanctioned artificial intelligence that secretly defied its creators to end World War II at Nagasaki, but created a far more powerful threat in the aftermath. Now, after decades in the shadows, ENIAC is about to execute its endgame with a countdown that could erase mankind once and for all.

JULY 2021
SLAY BELLS #1
Zeb Wells (writer) ** David Lafuente (art/cover) ** Ulises Arreola (colors)
SANTA-SIZED ONE-SHOT   Wanna get in while the gettin’s good with Bad Idea?  You simply have to visit a Bad Idea “Destination Store” — one of the 200 and counting comic shops around the world that have signed on to join our independent network of direct-distribution retail partners — to pick them up on a Wednesday. (Or pre-order in advance to make sure you secure your copy.)

For more information, visit Bad Idea online at BadIdeaCorp.com, Facebook, Twitter, and Instagram, or just mash the screen with your palm and do all four simultaneously.
***  ENIAC #1 ***
Written by  MATT KINDT
Art by DOUG BRAITHWAITE
Colors by DIEGO RODRIGUEZ
Cover by LEWIS LaROSA with DIEGO RODRIGUEZ
PLUS: An All-New BAD IDEA B-SIDE
FOUR ISSUES  |  MONTHLY
$3.99 EACH  |  48 PGS.  |  RATED T+  |  ON SALE MARCH 3, 2021