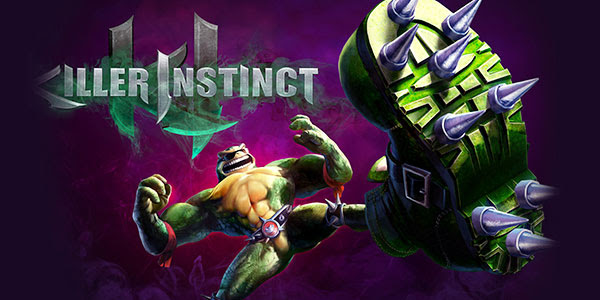 Gamescom 2015 brought a lot of news, especially for fans of Microsoft and the X-Box One and PC’s, but for me, the one that stood out the most was the reveal of Season 3 for Killer Instinct, which brings one of the infamous Battletoads to the fighter’s roster. Thanks to X-Box’s e-newsletter, we got some more information on it, as well as a awesome trailer!

Developer Iron Galaxy Studio will in fact be bringing a season 3 for the revived classic fighting game, which is set to release in March 2016. Yes, that’s far too long to wait, but at least it’s coming. Guest fighters are touted as being a part of it, and one of those guests is the shade wearing amphibian, Rash from the classic series, Battletoads.

Perfect timing as the mega popular Rare Replay is now in stores, which features the classic side scroller in its collection. If you purchase the Rare Replay or have purchased any Killer Instinct content, then you too can play as Rash right now during a limited sneak peak window that ends on September 8th.

Yes, right now. I just played as him, and I can’t explain how awesome it is to see a Battletoad brought to the next generation of games, let alone in one of my favorite fighting game franchises. Of course, Rash’s move set and design is subject to change before Season 3 drops in March. But for now, go enjoy a slice of nostalgia.

For way more information, be sure to head over to the official home of all things Killer Instinct.