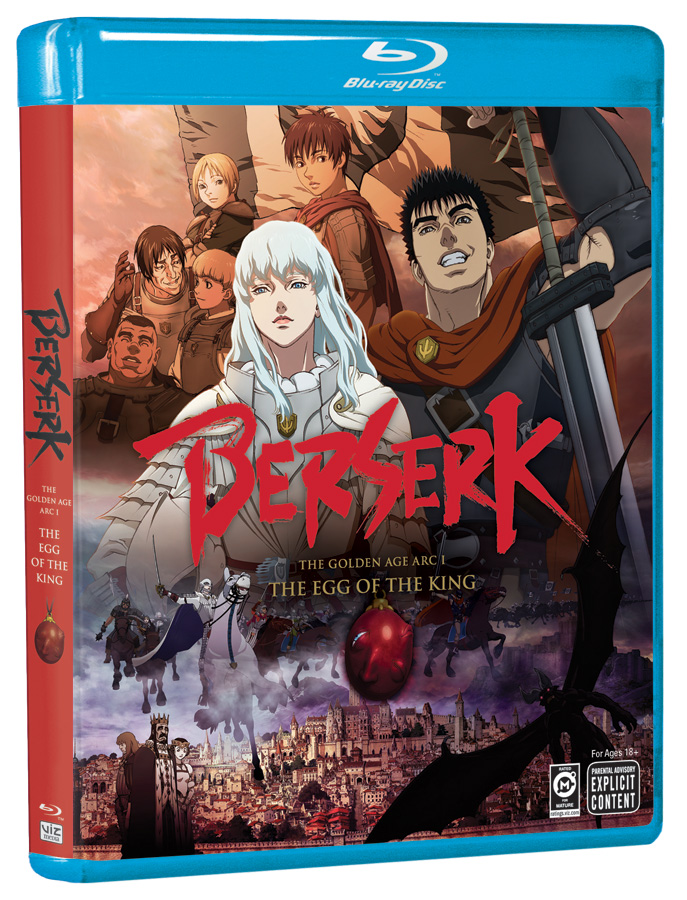 VIZ Media has released Berserk: The Golden Age Arc 1- The Egg of the King on DVD and Blu-Ray today! The DVD is the first in a series that faithfully constructs the Berserk manga into a glorious modern day epic. Check out the press release below, and be sure to pick up the DVD or Blu-Ray today!

San Francisco, CA, November 27, 2012 – VIZ Media, LLC (VIZ Media), the largest distributor and licensor of anime and manga in North America, brings the arms and armor action of one of this year’s most anticipated anime releases to home video as it releases BERSERK: THE GOLDEN AGE ARC I – THE EGG OF THE KING on DVD and Blu-ray today.

BERSERK: THE GOLDEN AGE ARC I – THE EGG OF THE KING is rated ‘M’ for Mature Audiences and will carry a DVD MSRP of $19.98 U.S. / $24.98 CAN and a Blu-ray MSRP of $24.98 U.S. / $27.50 CAN. The film features both dubbed English dialogue and original Japanese subtitle dialogue options. Bonus features include a production art gallery.

The lone mercenary Guts travels a land where a hundred-year-old war is taking place. His ferocity and ability to kill enemies attracts the attention of Griffith, leader of the mercenary group “The Band of the Hawk,” and Guts is recruited to the unit. Thanks to their continued victories on the battlefield, the bond between Guts and Griffith deepens, but despite all their success, Guts begins to question his reasons for fighting for Griffith’s dream. Unknown to Guts, this unyielding dream is about to bestow a horrible fate on them both.

“The foreboding medieval action epic that first thrilled North American audiences as an acclaimed graphic novel series delivers a whole new level of excitement with its debut as an anime feature film,” says Brian Ige, Vice President, Animation. “BERSERK: THE GOLDEN AGE ARC I – THE EGG OF THE KING also features a stellar cast of voice actors including Marc Diraison in the role of Guts, Kevin T. Collins as Griffith, and Carolyn Keranen as Casca, the only female member of the Band of the Hawk. With its engrossing plot, multi-faceted characters, and highly detailed kinetic battle sequences, which are phenomenally well-staged and animated, this film is a definite must-see for anime fans everywhere.”

The BERSERK manga series, by Kentaro Miura, debuted in Japan in 1989 and quickly drew a devoted following, going on to sell more than 30 million copies worldwide. The series, still ongoing in Japan, has been published in North America by Dark Horse Comics and the UK, as well as in France, Germany, Italy, Spain, Russia, and Latin America. The BERSERK manga has also inspired a popular anime television series and has spawned a variety of related video games, collectable figures and toys, and music soundtracks, as well as the current BERSERK: THE GOLDEN AGE ARC film trilogy.

For more information on the BERSERK: THE GOLDEN AGE ARC film trilogy, please visit the official Facebook page at: www.facebook.com/BerserkFilm.