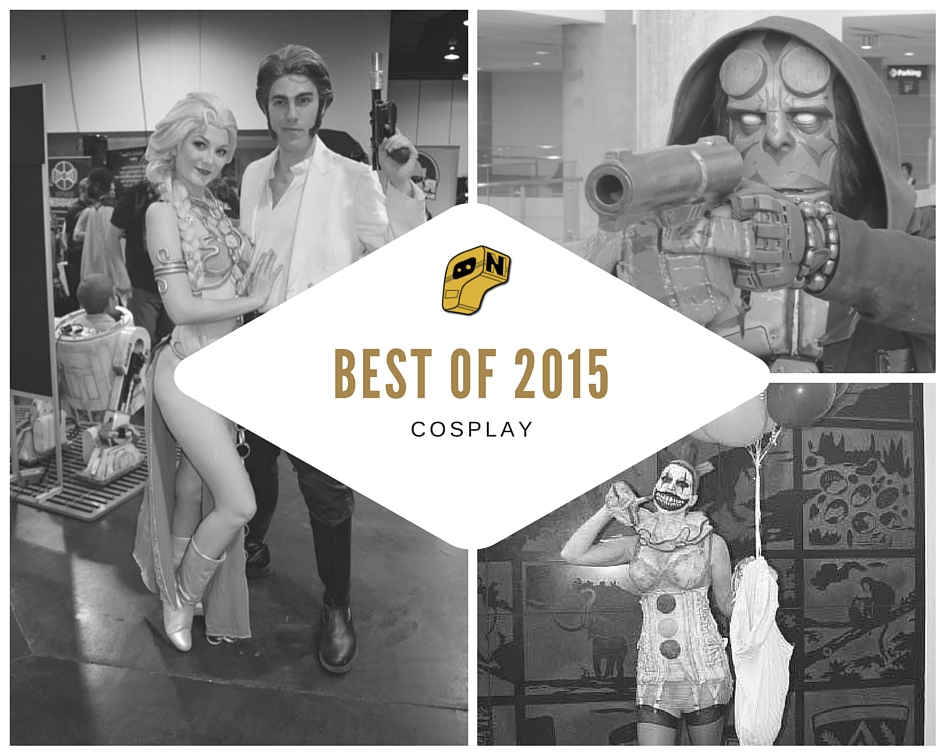 By the Pastrami Nation team

With the last installment of our Best of 2015 series, I guess you can say we saved the best for last as we select our top cosplays of 2015. The Pastrami Nation team went to quite a few cons in California this year, including the San Diego Comic Con, WonderCon, Star Wars Celebration, Comikaze Expo, and the Long Beach Comic Con, and we saw some amazing cosplayers! Below you will find our top 10 cosplays for 2015, with their name and Instagram handle if we have it. Many cosplayers found their photos on our social media outlets and tagged themselves, so we know who they are now! If you see yourself here, please tag yourself and let us know so we can add it into the Best of 2015 list.

So, in no particular order, here is Pastrami Nation’s Top 10 Cosplays of 2015! 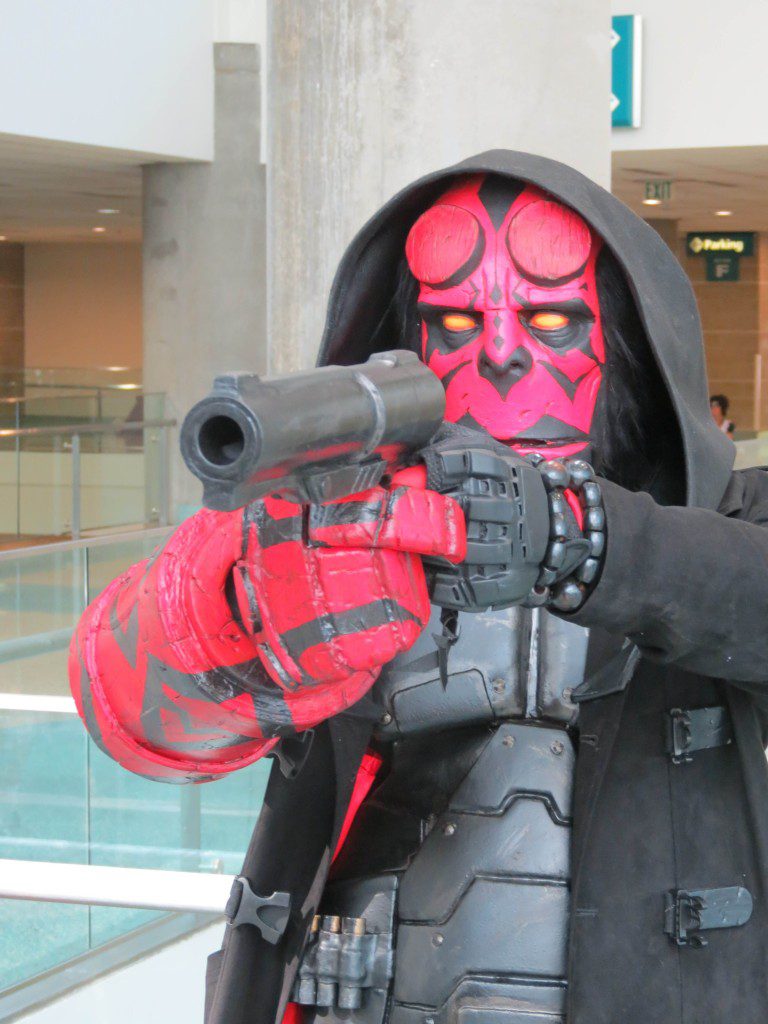 This awesome mash up from Comikaze caught our eyes right away- being a combination of Mike Mignola’s Hellboy and Episode 1’s menace, Darth Maul. The attention to detail, the sheer presence of this cosplay is downright amazing. Not only that, but LProjects has a killer Manolo from The Book of Life cosplay that has to be seen. 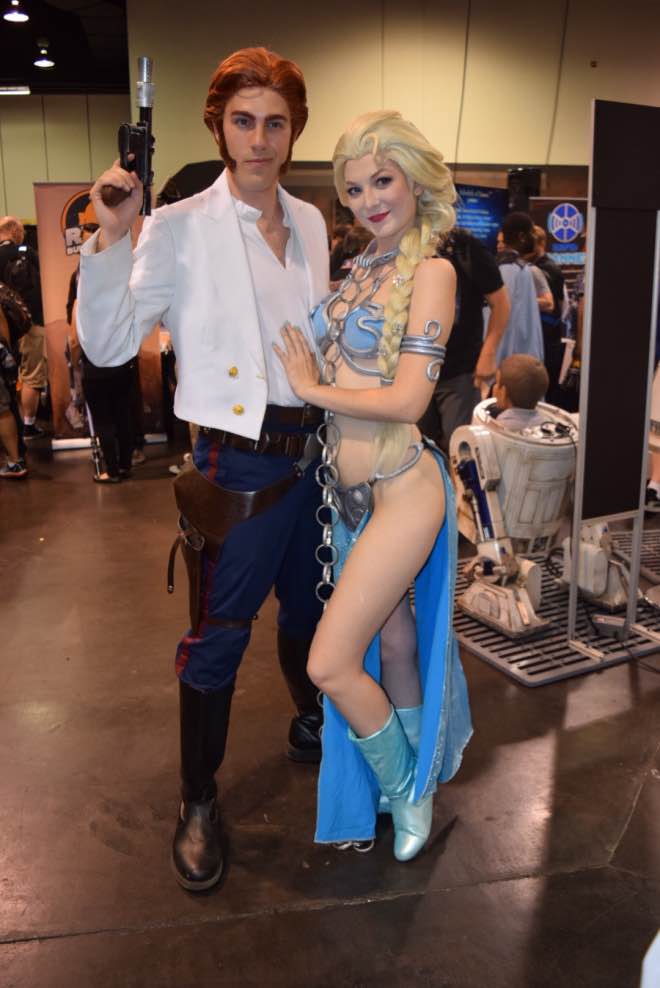 Star Wars Celebration in Anaheim brought tons of amazing cosplay, but two that easily caught my attention had to be the Frozen/Star Wars mash up of Slave Elsa and Hans Solo. Both looked like they jumped right out of Disney’s modern day classic and straight into Jabba’s barge. Oh, and a major plus? Both of these two were awesome in person, even though they were stopped every few steps for photos. 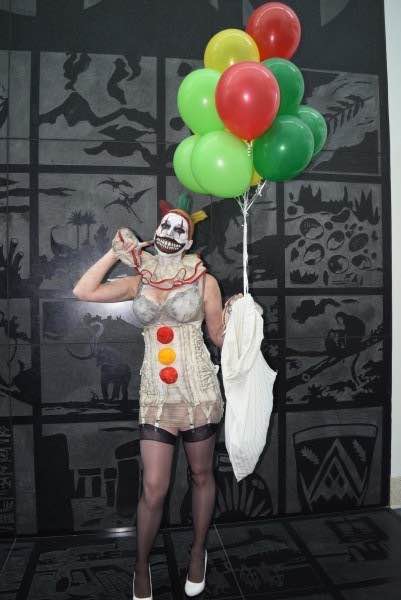 The iconic clown from American Horror Story made an appearance at the Comikaze Expo, but with a twist (pun intended)! An awesome female cosplayer pulled off a terrific and terrifying Twisty, complete with balloons to add to the creepiness. 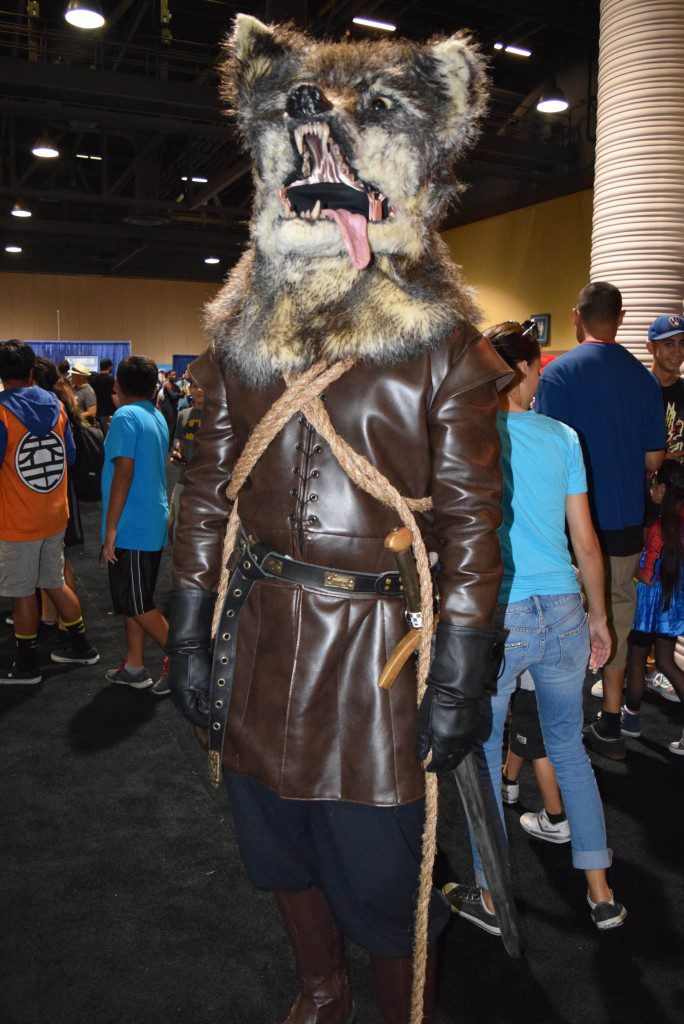 The King of the North 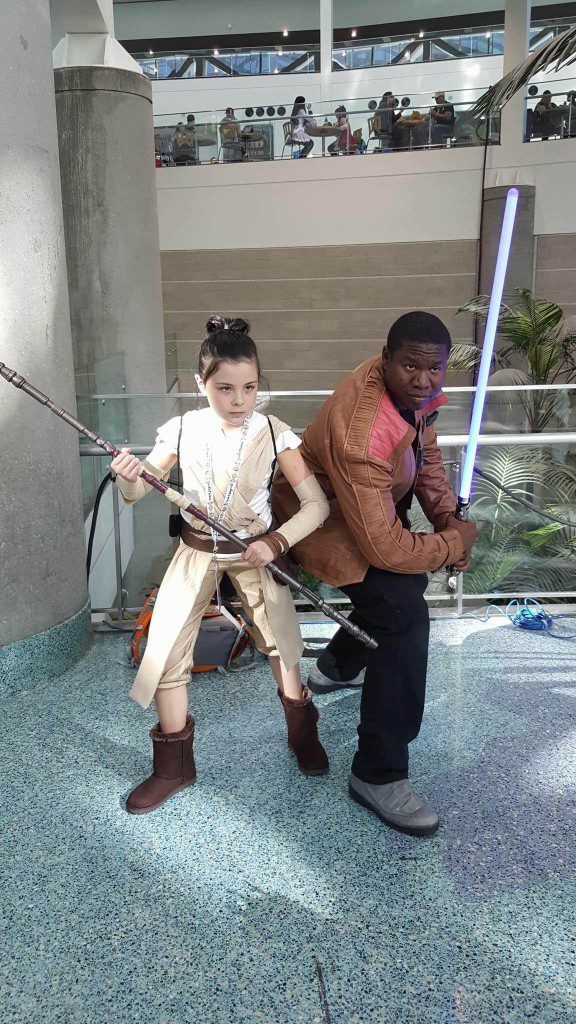 Building up to the amazement that is The Force Awakens, there were plenty of amazing cosplayers out there, bringing Rey and Finn to life. But this little Rey and awesome Finn were the coolest we saw at the Comikaze Expo, so we had to get the two in a photo. 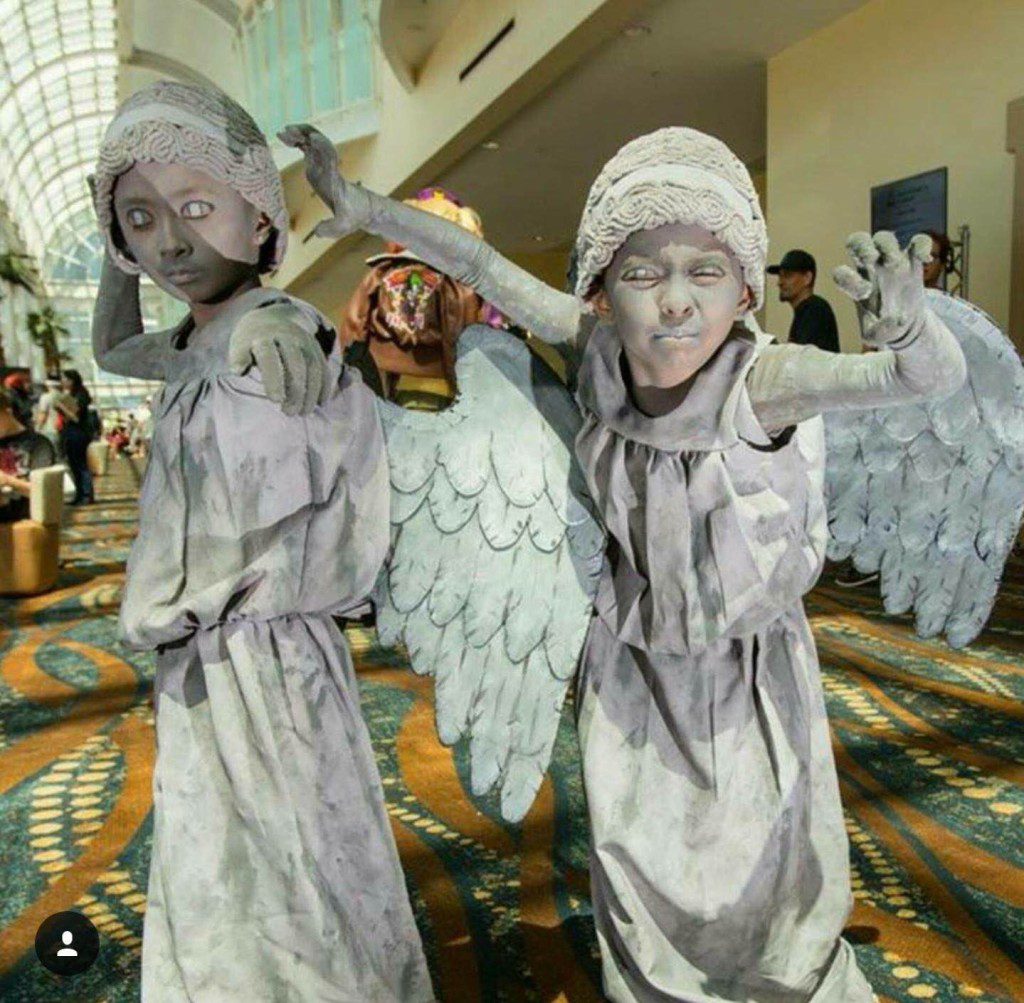 One of the scariest parts of the Doctor Who mythos is the Weeping Angels. So when we saw these two at the Long Beach Comic Con, we had to snap a pic. These twin girl cosplayers nailed the look of the angels, and have done Attack on Titan cosplays as well. (The photo above is from their Instagram page.) 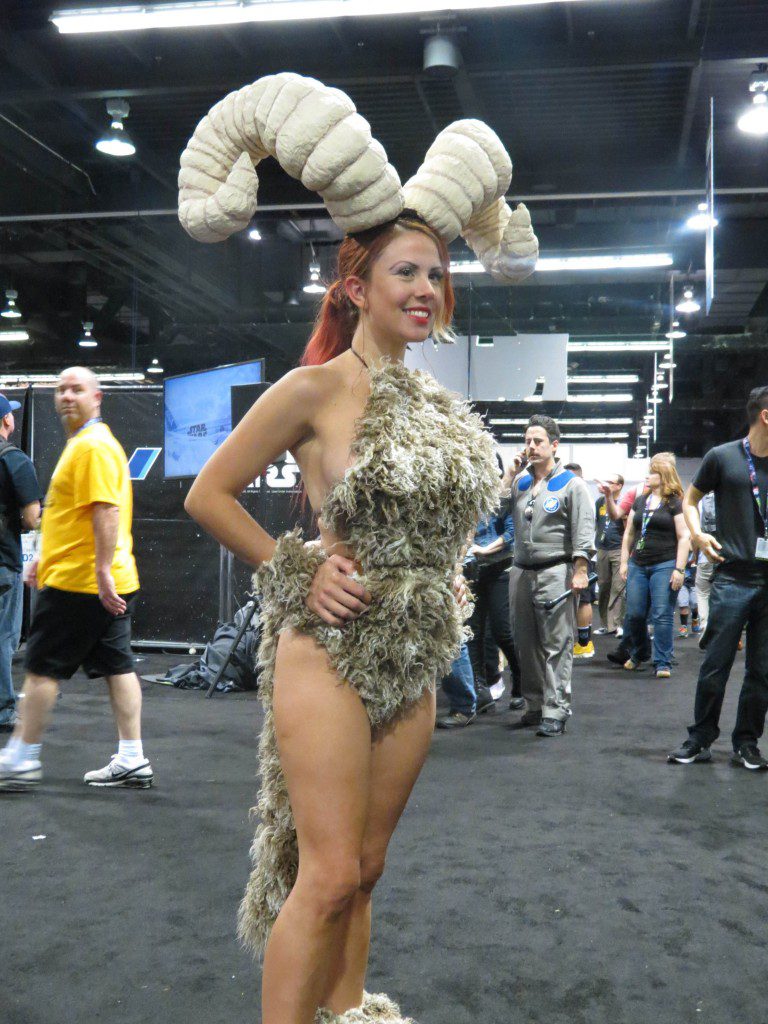 Another one from Star Wars Celebration, this one instantly stuck in my mind. I mean, I have never seen a Bantha cosplayer first off, and second, I never even imagined a sexy Bantha cosplay. She pulled it off beautifully. Who could have ever imagined this? Awesome cosplay! 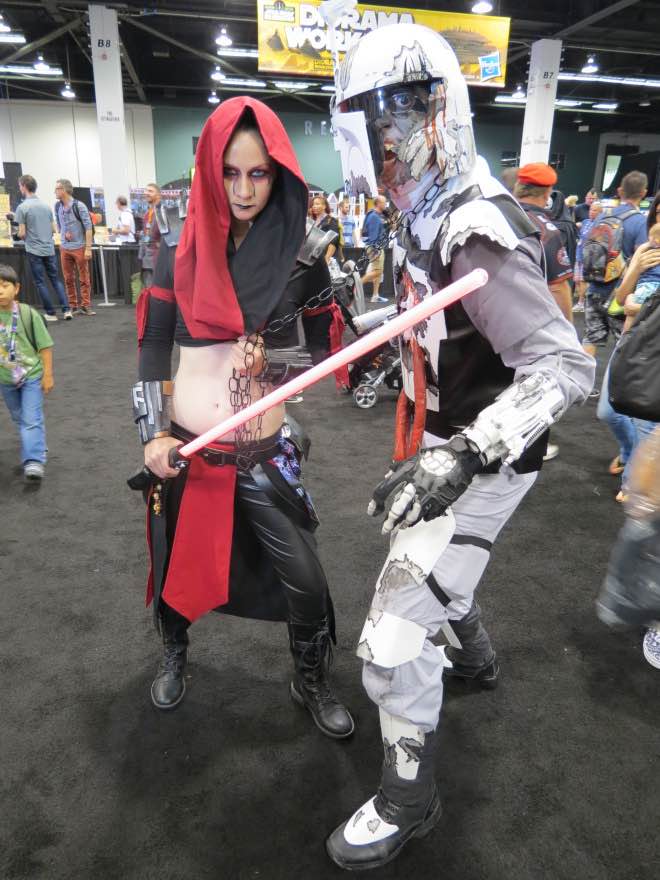 I don’t know who these cosplayers are, but they turned heads at Star Wars Celebration this year. The undead mandolorian and the sith lord mistress had a touch of The Walking Dead to it. The photo doesn’t quite do these two justice, and I can’t wait to see what they do next. 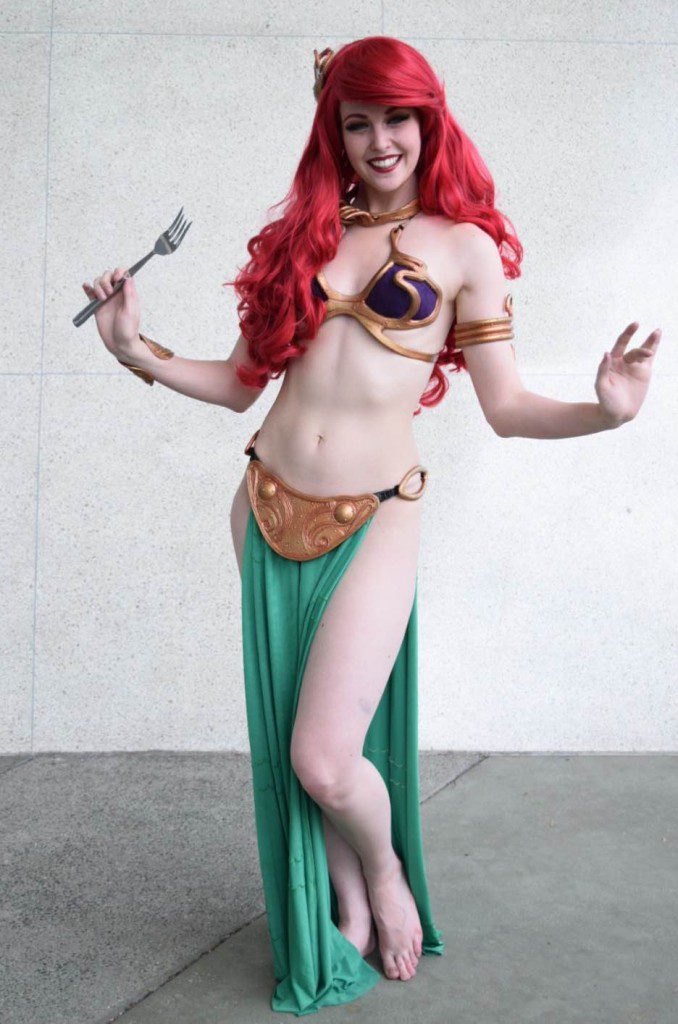 The first mash up I saw this year featuring a Disney Princess and Slave Leia, I caught Slave Ariel just as I had arrived at Star Wars Celebration, and what a great job she did! Maid of Might has so many other great cosplays, like a spot on Spider-Gwen, you got to check out all her cosplay awesomeness.