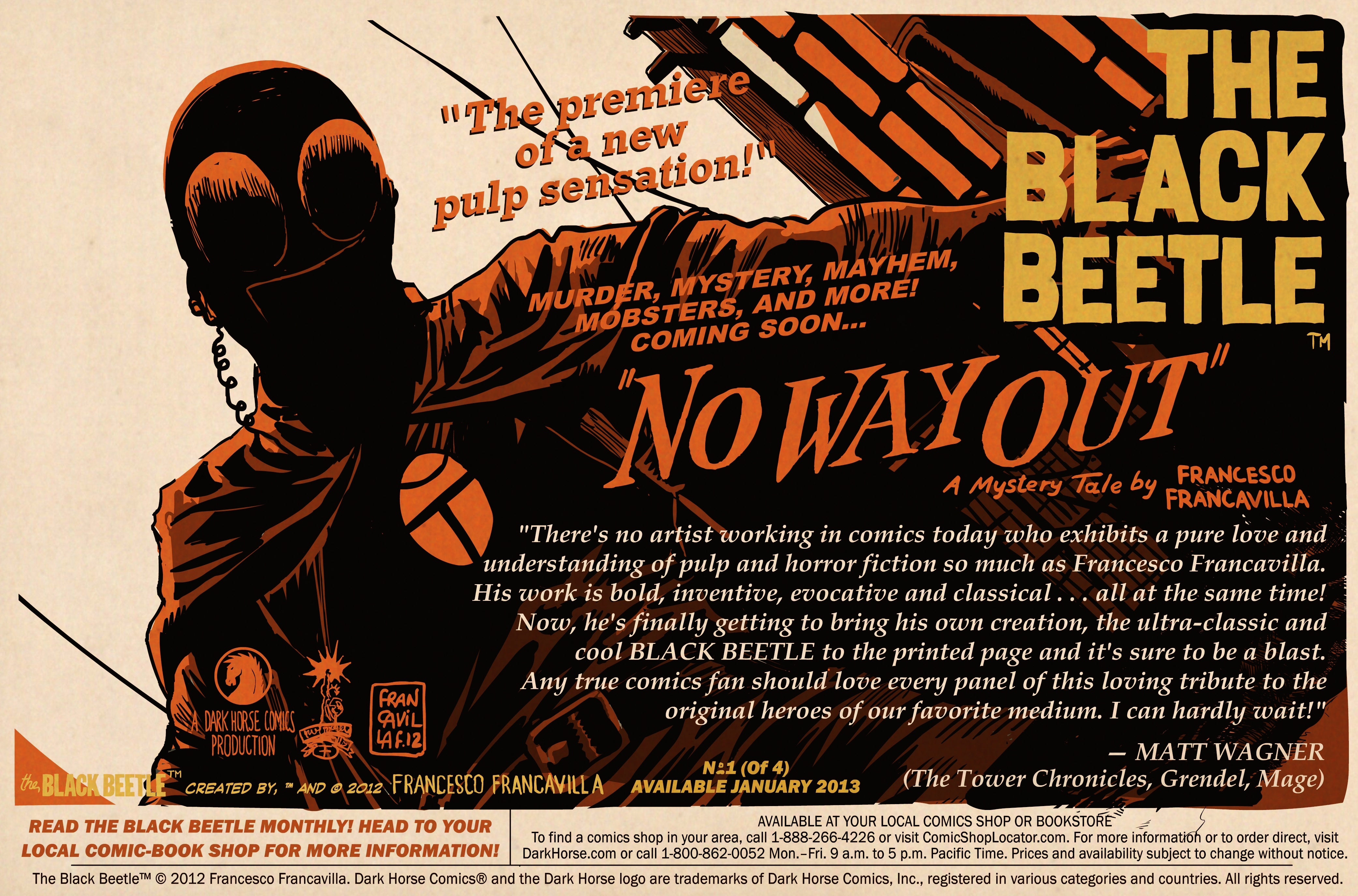 Hurray for The Black Beetle!

Dark Horse Comics newest pulp hero has sold out! Black Beetle #0, which recounted the stories from Dark Horse Presents, has now sold out as the epic first issue release in one week! Check out the press release from Dark Horse below, as well as an extended preview!

FRANCESCO FRANCAVILLA’S
THE BLACK BEETLE #0 SELLS OUT!
DARK HORSE OFFERS EXTENDED PREVIEW OF ISSUE #1!
January 7, MILWAUKIE, OR: In another amazing show of demand for Dark Horse comics, The Black Beetle: Night Shift has sold out of its entire printing!

“[Francavilla] proves that a good, old-fashioned adventure story can still raise the bar in comics, whatever genres one may care to throw into the mix,” Hannah Means-Shannon said in her review of The Black Beetle: Night Shift on The Beat. “The Black Beetle certainly has the potential to become an enduring ‘cult classic,’ inspiring readers to roll up for more ‘twisted thoughts’ from Francavilla in 2013.”

And readers are in luck, as the first full-length series for Francavilla’s The Black Beetle premieres this month with The Black Beetle: No Way Out #1, on sale January 16, 2013!

Coming soon in No Way Out #1, Black Beetle’s investigation of two local mob bosses is interrupted when a mysterious explosion murders them and a pub full of gangsters—taking out most of Colt City’s organized crime in one fell swoop. Who could pull off such a coup, and what danger might that murderous bomber do to Colt City and Black Beetle?

Be sure to head to your local comics retailer to check out The Black Beetle #1 before it’s gone for good!

Praise for The Black Beetle:

“If there’s one comic book that we’re most excited for in 2013, it’s Francesco Francavilla’s The Black Beetle. So far, it looks to be a throwback to the serials and film noir of the late ’30s and early ’40s. And now Dark Horse Comics has provided a taste of what to expect with this prologue issue.”—Complex

“Murder! Intrigue! Nazi werewolves! Is there anything else you really need in a book? Considering that everyone from Jim Steranko to Matt Wagner to Warren Ellis is raving about the book, we suggest you hightail it down to your local comic book shop and snag a copy before the trail goes cold.”—Nerdist

“Francavilla is a master of his craft . . . If you enjoyed Francavilla’s work at DC then you owe it to yourself to get on this. The Black Beetle is a delightful slice of skewed madness from one of today’s finest artists.”—Comic Book Resources

“Uncommonly beautiful . . . The Black Beetle is the purest expression yet of Eisner-winning artist Francavilla’s love for pulp, mystery, noir and superhero aesthetics, qualities that art fans have seen on display in a major way with his more than 70 cover illustrations released in 2012 alone.”—ComicsAlliance