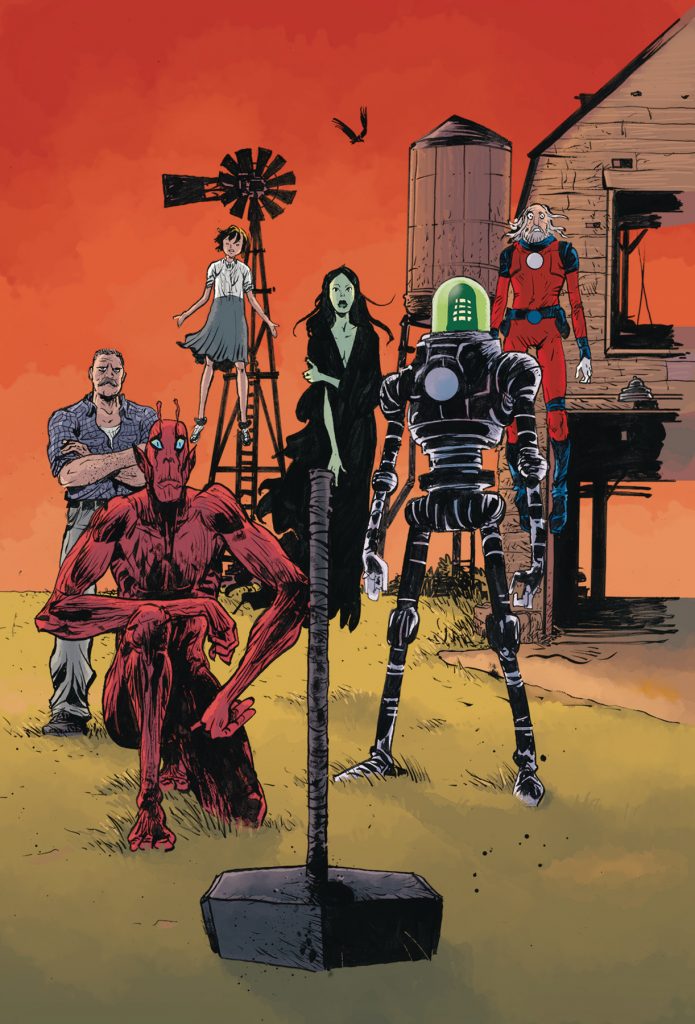 I didn’t really see this one coming, but it looks like we have reached the end of Black Hammer, or at least that is the feeling I got after reading this issue. Not familiar with Black Hammer? It is the must-read superhero book of the year, time to catch up.

Take the archetypes of the superheroes that we know and love and infuse them with a healthy dose of reality- that’s Black Hammer. A group of heroes became displaced to an unknown, mysterious farm while fighting the ominous Anti-God, losing their champion, Black Hammer, in the process. After years of trying to find out what happened, they made it back to the real world, but was it worth it? Can it last?

From Jeff Lemire, Dean Ormston, Dave Stewart and Todd Klein, it has all been building to this. Our heroes have found themselves trapped in the real world as the Anti-God once again threatens to destroy everything. Is there a way to save the world and their lives as well? Life wasn’t what they thought it would it be compared to being stuck on the farm, but whenever they come back to reality, the Anti-God resurfaces. We get a massive ending here, one that has been building up since Black Hammer first debuted.

Lemire is so great at making characters human, in helping us feel their pain and identify with them. It is what I have loved about this series from the start. Combined with Ormstons amazing artwork, Stewart’s eye-popping colors and more, this book felt like far more of a goodbye than it should. Maybe I am saying that because I am not ready for it to end. Perhaps I am shocked because I know there are big plans for Black Hammer that transcend comics. But I know Lemire has a plan for this all. It is a very fitting end to the current storyline, and I look forward to any new stories we get from the Black Hammer universe.