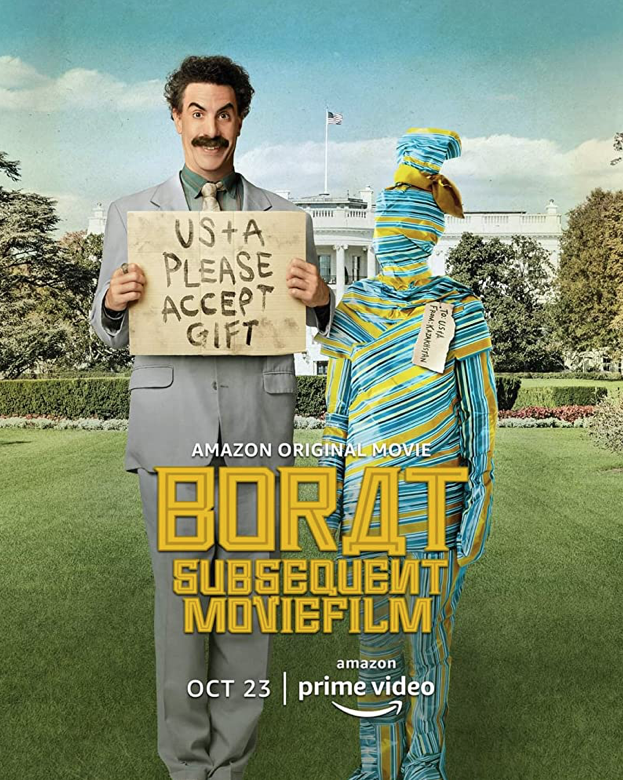 In 2006 the world was introduced to Borat Sagdiyev, a fictional character created and played by Sasha Baron Cohen. The film “Borat: Cultural Learnings of America for Make Benefit Glorious Nation of Kazakhstan” became a cultural phenomenon in the United States while also creating one of the most imitated and iconic characters in recent memory. It was a movie that was outrageous, irreverent, inappropriate, and hilarious. And while most of us thought that was the last we would see of one of Kazakhstan’s top reporters, we were all proven dead wrong.

Borat 2, or “Borat Subsequent Moviefilm: Delivery of Prodigious Bribe to American Regime for Make Benefit Once Glorious Nation of Kazakhstan” was announced about a month ago before a release on Amazon Prime on October 23rd. It was a surprise announcement, and it got everybody talking about Borat again, and fans of the original were excited. Truth be told, I laughed a lot during the trailer, but I still had my doubts. However, any doubts I had were wrong, and this film delivered on everything one would hope for and then some.

The film follows Borat as he once again gets into shenanigans while traveling the United States. Being sent by the Kazakhstan government to clear their reputation after the events of the first film, they send him with a gift for Vice Premiere Mikhael Pence. To complicate matters, his non-male son Tutar packs herself up and ships herself to meet him. When a mishap occurs involving the first gift, Borat finds a new way to make things right: giving Tutar as a gift to the Vice Premiere to marry her off.

Starring Sacha Baron Cohen and Maria Bakalova, the return of Borat is a welcome one. In fact, there isn’t a better time for Cohen to return as one of his funniest characters. He has a way of revealing things about our culture that we like to keep hidden away, things that we are afraid to talk about openly. The thing about Cohen is that he isn’t afraid to take risks, and he gets himself into situations that are both outrageous and eye opening. While I don’t believe everything that happens on screen (editing is an interesting thing), it’s still enough to make you think and face the sad truth about ourselves.

On top of being extremely relevant, this film is also crude, rude, highly inappropriate, and freaking hilarious. There are moments that will make you super uncomfortable while you are shedding tears of laughter. Half of the time, I was covering my mouth in disbelief with what was happening on screen that I felt terrible for laughing at it, but I couldn’t help it. A scene that takes place at a dance, in particular, is so hard to watch and unbelievably funny. I had to catch my breath. There are things in this film that skirt the boundaries of good taste, and it was incredible.

While Cohen is excellent in the film as Borat, it is the new addition who really shines. Maria Bakalova is phenomenal as Tutar. Although she is his daughter in the movie, they are definitely not the same, and she brings a whole new perspective to the material. The film could have easily been a subpar sequel mixing story with “reality,” but she elevates it to a new level and makes it fresh again. What also makes the film great is the supporting cast, which consists of real people. It’s their reactions and how they play along with Borat and Tutor that makes the film what it is. They deserve as much credit as the stars.

“Borat Subsequent Moviefilm: Delivery of Prodigious Bribe to American Regime for Make Benefit Once Glorious Nation of Kazakhstan” isn’t a movie for everyone. If you like your comedy unfiltered, it is definitely for you. There is an oddly sweet father and daughter story underneath the craziness, and it’s one that many people will enjoy. Definitely seek it out on Amazon Prime.

Rating: 4 Pastrami Nations out of 5.