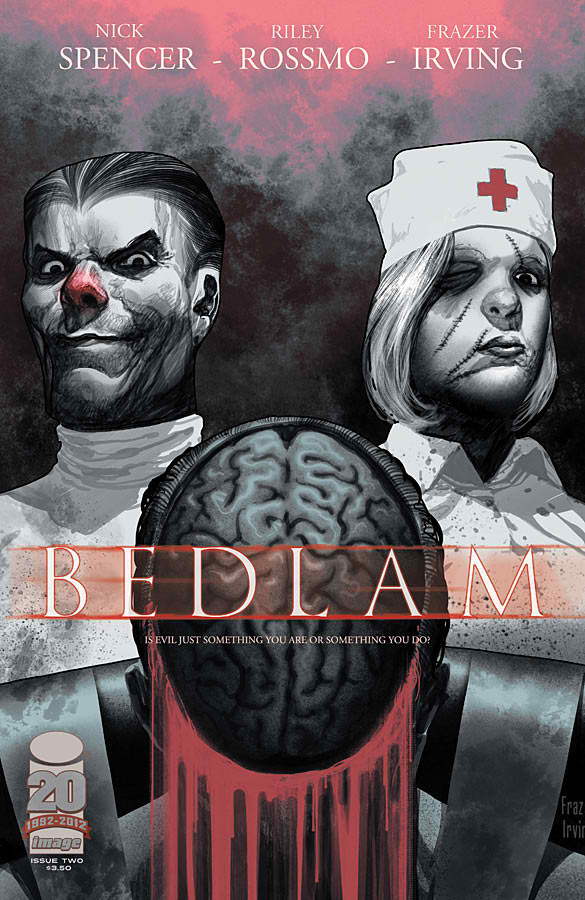 The first issue of Bedlam was quite the accomplishment. The outright gore, the maniacal villain who is trying to change his ways, it was an awesome start to the series. Now, with issue #2, we dive deeper into the world of former villain Madder Red, and his path to trying to do some good in a world that he has hurt for so long. Does the momentum keep going, or does this issue fall victim to the sophomore slump?

This issue is more about the back story than the here and now. We know Madder Red was a homicidal murderer: now we see how exactly it came to be that he wants to change his life, and it wasn’t by choice. We also see the new threat of the book: another crazed, delusional psychopath that is leaving a trail of blood wherever he strikes. Not a whole lot of action in this issue, but we do get some terrifying moments, as well as insight to the police force that is tasked with finding this new killer. Nick Spencer continues to write a strong series, one that looks to be coming to a boil. The Madder Red character is still that bad guy that you kind of root for silently now that he is trying to lend his talents to stop a murderer. Riley Rossmo once again provides the stunning visuals. Rossmo’s style is what really brings the world of Bedlam to life, and makes it seem like a living nightmare.

All in all, this book has lost some steam coming into the second issue, but that is to be expected. This is more of a development issue, as we see more of the who, what and why and less of cause and effect of it all. Still, this book shows it has legs, and I feel that fans won’t be disappointed as the book moves forward. Highly recommended, I give Bedlam #2 a solid @@@@ out of FIVE.