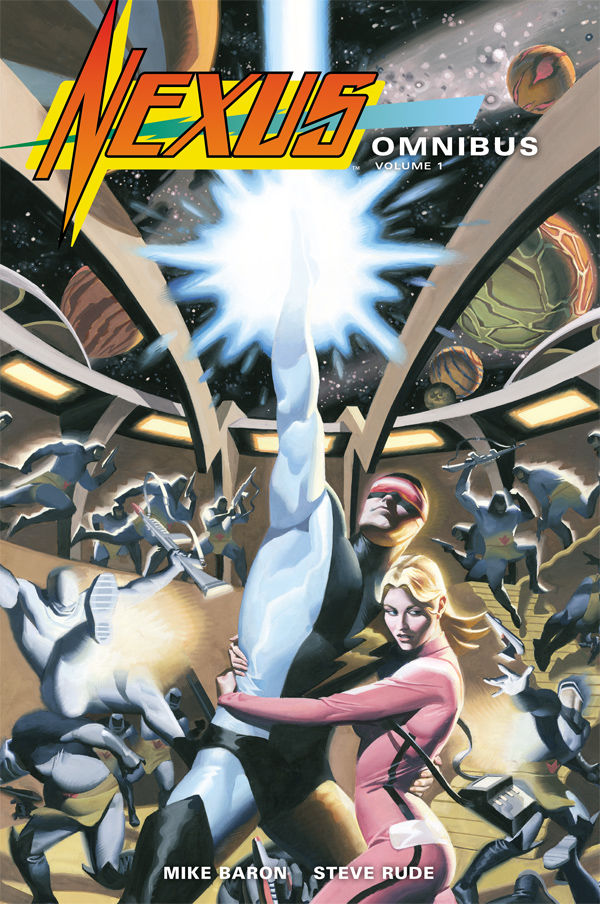 Space: the ultimate setting for a comic, movie, video game, you name it. The unknown of the vastness of space, the unfamiliar planets and their inhabitants, the brave hero that outshines adversity: Halo, Mass Effect, and Saga are all sci-fi epics that have ruled space in recent memory. But flashback to 1981, and there was a comic pioneering space and meshing the genres of sci-fi and superheroes: Mike Baron and Steve Rude’s Nexus. This omnibus collects the early works of the iconic hero, and makes for the ultimate jumping on point for those unfamiliar with the masked man.

Story: 500 years into the future is where the story begins. Horatio Hellpop is the man called Nexus: a super powerful being that lives on a far away planet of his own, and exacts vengeance on those that deserve it, such as mass murders and tyrants. The galaxy, including Earth, fears the man and all the mystery that surrounds him. The power Nexus has comes at a cost, as he is far from living the life of a hero.

The book covers how Horatio came into possession of his powers, and introduces and alien cast of support characters that really add to the dynamic of the book. The focus on the book is mainly on the burden of the power Nexus has, including the horrifying dreams he has of his next targets. This is not your run of the mill superhero: no, this is a complex, layered and flawed man who is trying to find his way in the expansive universe.

Art: Steve Rude, now a legend in the comic book field, co-created the Nexus character with Baron. His artwork is highly stylized, smooth, and lively to an almost animation like quality. Even in the early issues, which are in black and white, Rude holds a master class on how to create a visually engaging book. The designs, from Nexus’s iconic suit to the various aliens and other heroes in the book are created with such a unique flare, one that is unmistakably Rude.

Overall: As big of a comic book fan that I claim to be, I had never read Nexus until now. I can’t help but think of what I have been missing out on, as this omnibus had me flipping though the pages at a manic pace, unable to put the book down. This is, in my opinion, one of the best sci-fi comic books I have ever read, as well as one of the best in the superhero genre. If you are a fan of the comic book medium, you owe it to yourself to check out this high quality omnibus. Highly Recommended, I give Nexus Omnibus Volume 1 a perfect @@@@@ out of 5.