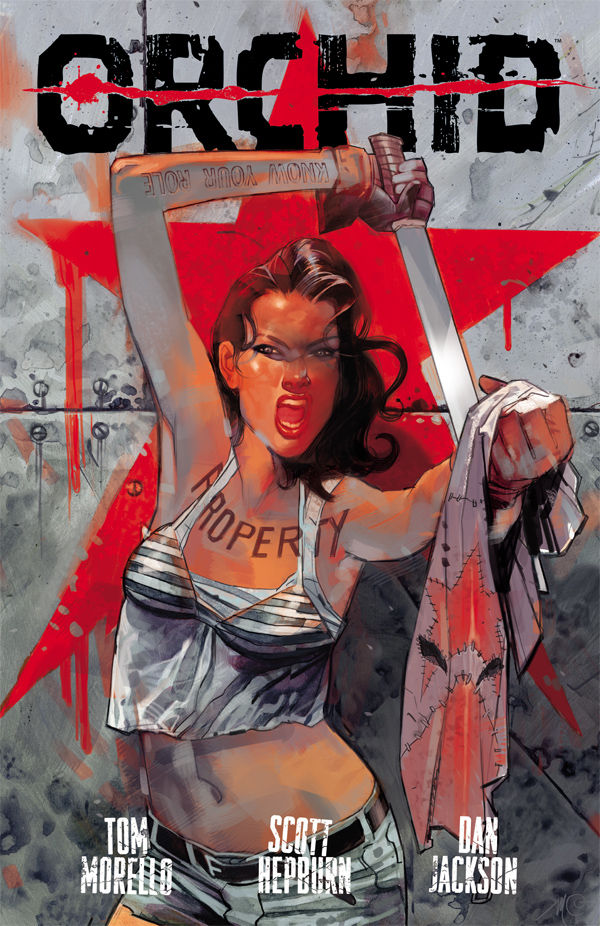 Earlier this year, I had the pleasure of reviewing Orchid Volume 1, which was a blast of originality. Tom Morello, from the mega popular rock group Rage Against the Machine, created a world of distain, of misery, but more importantly: of a sliver of hope. The first collection introduced us to the divided world, as well as those still fighting for change no matter how bleak the outcome may seem. Now, with the second volume, we see the action ramp up and the stakes raised even more.

The second volume contains issues #5-8 of the series, which is where lots of the action builds. The small group of regime opposition, including Orchid, the young heroine of the story, Simon, the geeky but loyal rebel, and Opal, the mysterious woman with the legendary General China’s mask, make their way to free the new rebel leader from certain death at the command of the mad dictator, Tomo Wolfe. The mask in Opal’s position grants the wearer unbelievable powers, but only certain few can don it and not be murdered instantly. What we get is some fuel driven action scenes, some more insanely crazy beasts, and a look into what made Opal who she is, as well as the peek at Wolfe’s troubled past. Orchid grows as well, as she starts to change with the world that constantly seems to change around her.

Morello continues craft an amazingly original story, with plot twists and revelations abound. By the end of the book, we have a good idea of what volume three will entail, or at least the direction it will go in. Hepburn’s art continues to impress, as he designs this strange world of cannibal guards, monsters and more with such creativity. This collection should be proof enough to those that might say that Orchid Volume 1 was a one hit wonder, We get more story, more characterization, more epic battles, and more reason to jump on board Dark Horse’s runaway hit. Highly recommended, I give Orchid Volume 2 a perfect @@@@@ out of FIVE.