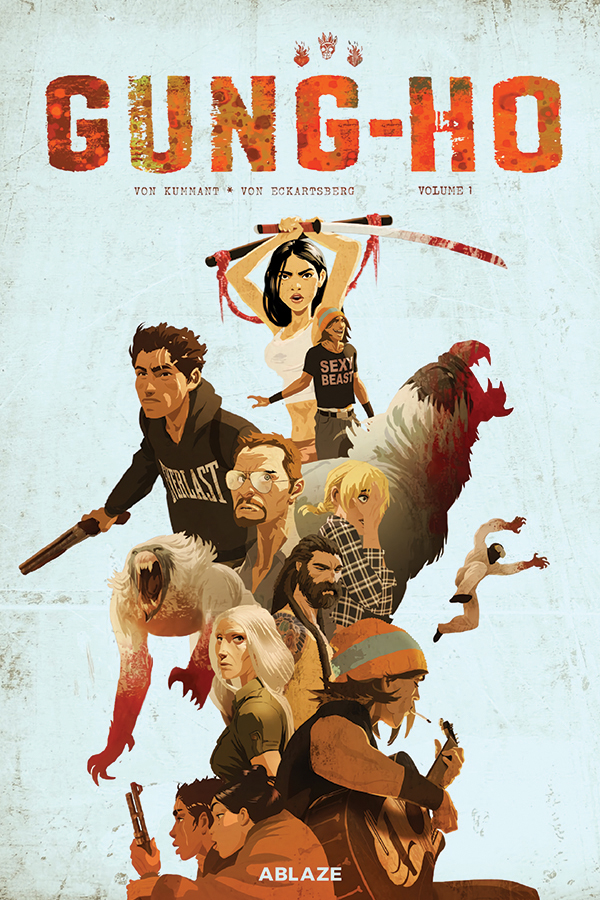 When I picked up the first issue of Gung-Ho from ABLAZE Publishing, I knew it was something special. The mystery, the intrigue, and the fantastic artwork had me hooked. With volume 1 of Gung-Ho, I dive into the whole story of the first series and what a story it is.

By Benjamin von Eckartsberg and Thomas von Kummant, the book takes place in an apocalypse scenario: the world has changed thanks to the “White Plague,” and communities have been fragmented, segmented to their own laws and rulers. Most of the world is a literal danger zone, as villages keep their surroundings on constant watch. For brothers Archer and Zack Goodwoody, their world is about to get changed again. The troublesome teens are shipped to Fort Apache, a last-ditch effort for them. Fort Apache is structured and safe, but that doesn’t mean the two won’t try to get in trouble by rebelling.

We see the two very different brothers trying to acclimate to a brand new setting, with new peers and new love interests. But outside the gates are dangers that the boys couldn’t imagine, like the Rippers. They meet teens like Salim, who is super helpful to the Goodwoody brothers. Holden and Bruno bring more trouble than anything, Tanaka and Yuki- a father and daughter duo who join the book in the second arc and send ripples through the community, and Pauline- who becomes a love interest to Zack. Teens do what teens do, but in this world, that could mean death.

Thomas von Kummant’s artwork is mind-blowing, and that’s an understatement. The book is absolutely breathtaking, unlike anything else on the shelves. It looks so fluid, like an animated film storyboarded out and rendered with the same time and attention as a big-budget animated feature would have. This is a mature readers book, with language and such abound, but it does not detract from the story at all. The action is real, the danger is real, and by the end of the book, we see the consequences are real as well.

Gung-Ho is one of my favorite releases of the year. It’sIt’s a breath of fresh air in the comic book world. ABLAZE has something extraordinary here, and I cannot wait for the next volume to begin.