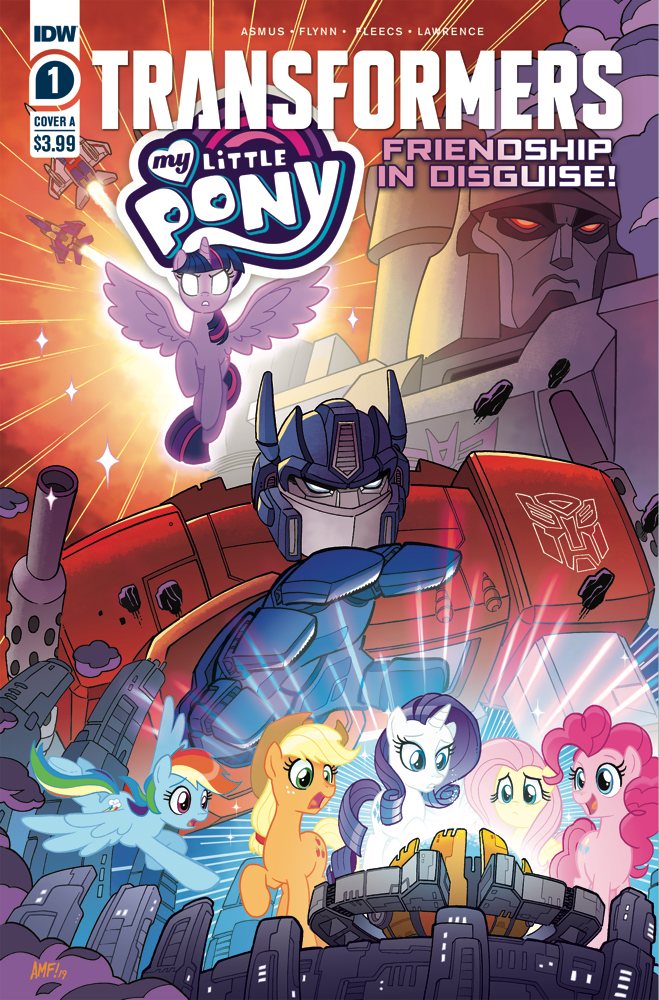 Curiosity and nostalgia compelled me to pick up IDW’s crossover comic of Transformers and My Little Pony: Friendship in Disguise. So, hold on as we are transported into a unique realm…

To start with, Writer James Asmus and Artist & Colorer Tony Fleecs give a “Roll Call” of all Ponies and Transformers within the story. This is extremely helpful if you are unfamiliar with the characters or have been a while since you’ve caught an episode or two. Then writer Ian Flynn and artist Jack Lawerence bring us “Shine like a diamond”.

The start of the story offers a chance to chuckle with the visual of labeling ‘Equestria,’ Transformer lettering-style, thanks to Letterer Jake. M. Wood and Color Flatter Lauren Perry. From the get-go, Friendship allows for hilarity, poking fun at the idea of crossover comics. Nemesis of every pony is Queen Chrysalis, who reigns over her Changelings. During her plot to overtake the Ponies, she mistakenly brings Transformers to Equestria. Leader of the Decepticons, Megatron seeks to join forces with Queen Chrysalis. The Ponies are faced with quite the challenge: not only do the Ponies need to trounce Queen Chrysalis, her Changelings, and Decepticons, they also are trying to make sense of who these new creatures are and what their purpose in Equestria is. A strong friendship is forged when Autobot Arcee and Unicorn Rarity come across each other outside Rarity’s boutique. But can their Friendship withstand the battle versus Queen Chrysalis and the Decepticons?

The artwork in Friendship is reminiscent of the older television shows. It is truly sentimental; the characters have withstood the test of time. I appreciate that the lettering is differentiated between the Ponies and the Transformers. It helps keep continuity in the story, yet allows for each group to retain their identities. The dialogue is what sets this comic up for success. The reader can hear Rarity’s sing-song voice as she interacts with those unlike herself. Holding fast to her decorum, Rarity strives to make the best of her situation–with the help of her new friends. Which is another aspect I admire in this comic. Friendship’s theme of making friends with dissimilar individuals is carried throughout the story. It speaks of being able to learn from one another, the value of loving and being loved–no matter of outward differences. Friendship in Disguise is a terrific, easy read for anyone of any age.