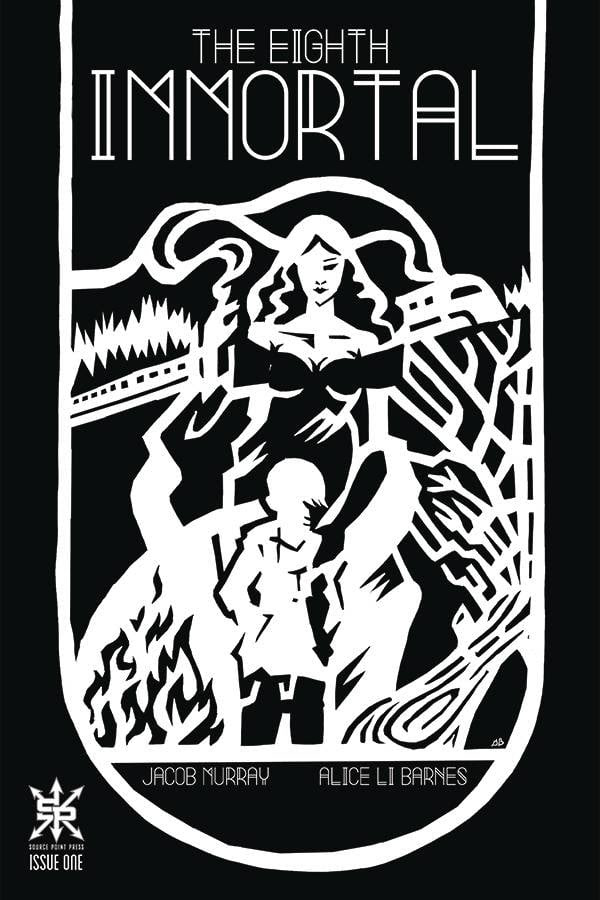 Stories of immortals have always fascinated me. Whether they are Gods from various mythologies to heroes with special powers, the thought of living throughout time is exciting and terrifying at the same time. So when I first heard about The Eighth Immortal from Source Point Press, I was intrigued.

From Jacob Murray, Alice Li Barnes, and Letter Squids, this book is different from the start. The manga-esque artwork paired with the sparse yet vibrant highlights of color makes for a very visually appealing book.

The story focuses on Curipan, one of the seven immortals that walk the Earth. We see how she maintains her immortal status at the expense of others in the opening scene, as she drains the eternal essence from others and keeps it for herself. But she harbors a secret; she had a baby that she abandoned to maintain her vow of keeping only seven immortals alive. But when she encounters a young boy that reminds her of her child, her whole mindset is put to the test.

We meet a few other immortals in the book, including her brother. He takes far too much joy in humanity while shirking his responsibilities, which lead to certain historical figures slipping past as immortals. It was great to see historical names dropped here, which adds to the myths of the tale.

The book is a mature readers book for sure, due to language and adult situations. The artwork here looks and feels like a manga but has a unique feel all its own. I really enjoy the color highlights set against a mostly greyscale book. The story feels like a manga, too, in all the best ways.

The book pulls you in as you want to see what choices Curipan makes next, who are the other immortals, and how did they come to be? What does the future hold for the young boy we meet near the end of the issue? The Eighth Immortal is engaging and addictive, an excellent debut issue for this brand new series.