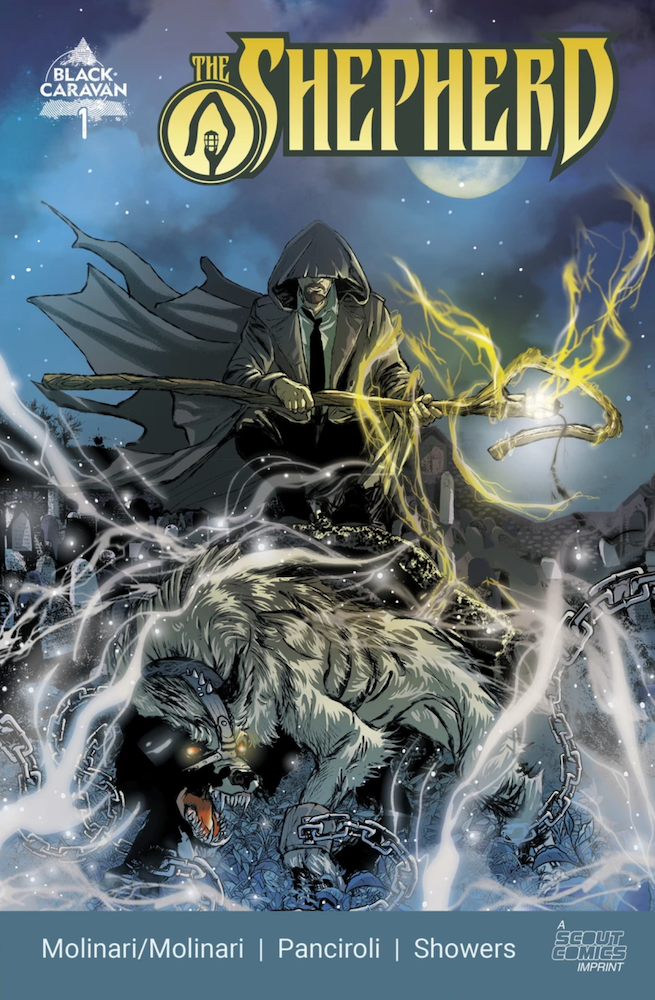 When I first saw the solicits for Scout Comics/Black Caravans’ The Shepherd, I knew I had to pick up. The title, the artwork, and the premise all pulled me in before I even read a single page. After reading the first issue, I can say I was guided in the right direction: The Shepherd delivers big time.

The book is part of Scout’s NON-STOP line, where the first issue is released, followed by the rest of the story in trade paperback form. From co-writers/co-creators Andrea Lorenzo Molinari and Roberto Xavier Molinari, artists Ryan Showers and Luca Panciroli, colorists Heather Breckel and Pamela Poggiali, and letterers Jacob Bascle and Joel Rodriguez, we get the first issue in two segments.

First up is our introduction to Lawerence Miller, also known as The Shepard. A guide of souls, we see him in Egypt as he tries to save the soul of a young woman who is facing the ancient deities Anubis and Ammit. This story is my favorite of the two, as we see The Shepherd duke it out with these mythological gods, with a trick up his sleeve as well. The artwork by Luca Panciroli, Pamela Poggiali, and Joel Rodriguez is so dynamic and fluid. I love the fight scenes and how visually stunning the display of The Shepherd’s power is. This story transitions us into the second part, which dives into the origin of how Lawerence became this new, powerful being.

We see how life was before with Lawerence and his family, and we see tragedy strike in the worst of ways. The origin story is powerful and emotional, as Lawerence and his wife try to deal with their son’s loss the best they can. The artwork here is a definite shift from the previous story, as it provides a more grounded, down to Earth feel, but that fits this story. We are left on a cliffhanger as we still don’t know how The Shepherd came to be.

This is an outstanding first issue and just a glimpse into The Shepherd. I love the story premise, and I am dying to find out how this all came to be. I would also love to see more stories like the first one, as he battles gods to fulfill his duty of guiding souls and maybe even saving himself. The Shepherd walks a path of creativity and emotions, and it’s one I want to keep walking down as well. An excellent start to a new series from Scout and Black Caravan!