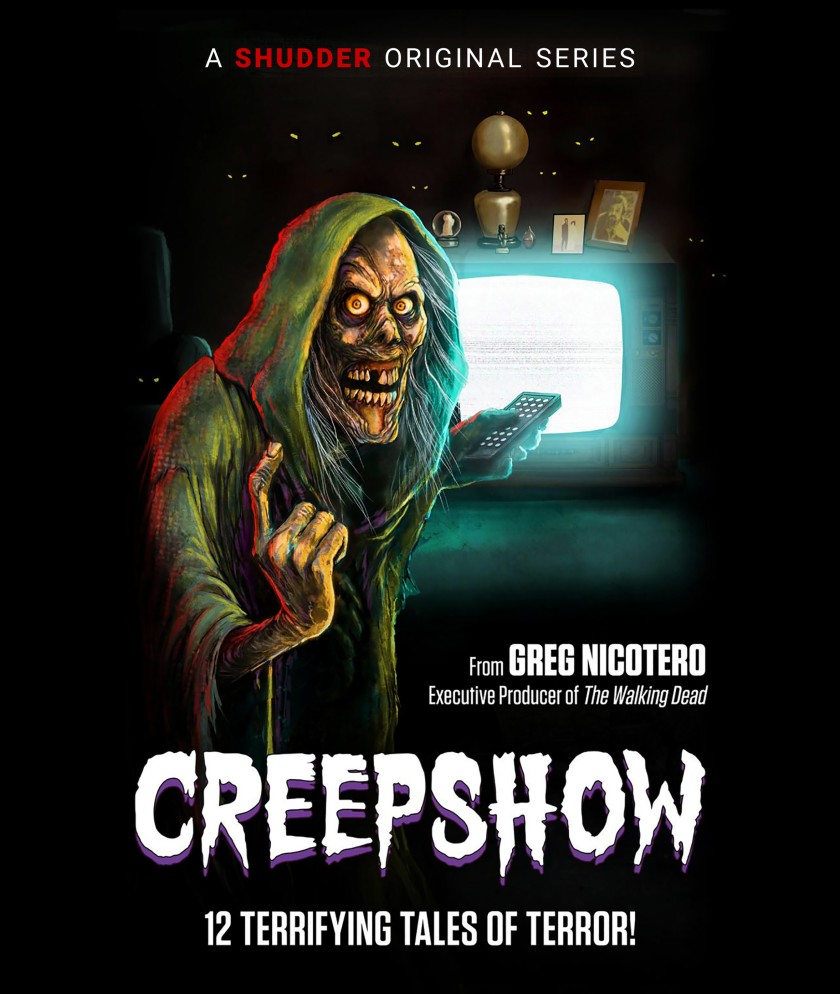 Creepshow, the 1982 horror/comedy anthology film from Stephen King and George A. Romero has been resurrected for the small screen courtesy of Shudder. The show follows on from the original film, and it’s sequel, featuring six episodes with two short stories per episode. Each episode will adapt short stories from Stephen King, Joe Hill, and Bruce Jones, as well as original stories by Greg Nicotero, Paul Dini and Rob Schrab.

The first episode of the series has been released, and I was excited to check it out. I can easily say that I was not disappointed.

The first story we are introduced to in this episode is “Gray Matter.” A massive storm is sweeping through a small east coast town, and a young man must get supplies for his father. After sensing something is not right, and knowing his father is an alcoholic, the shop owner insists that the young man stay and have a warm meal, while Doc and Chief, two old-timers, brave the storm and check on his dad. Over the meal, the boy starts to tell the shop keeper a story about him and his dad, one that gets darker and more terrifying as the night goes on. Soon, Doc and Chief come face to face with something out of their worse nightmares.

The next story is “The House of the Head.” A young girl discovers that her dollhouse might be haunted. That is the easiest, most spoiler-free description of the story possible. This story is all about the surprises and the small twists, and I would hate to give any of them away. Also, this is the best segment of the two.

“Grey Matter” stars Adrienne Barbeau, Tobin Bell, and Giancarlo Esposito, and they are all great. The story builds up to a sense of something wicked around the corner, and it does so without giving anything away. Christopher Nathan, who plays the boy Timmy, tells a story to the shop keeper that is so clear and believable, the episode would play on his storytelling abilities alone. The story builds up a sense of tension and doesn’t let up until it ends.

“The House of the Head” stars Cailey Fleming as Evie, the young girl whose dollhouse is haunted. Rachel Hendrix and David Shae play her parents. Unlike most kids in haunted house situations, Evie doesn’t say a word about the weird things happening in her room. And honestly, who can blame her? Most of the time, the parents just brush it off and ignore the warnings from the kids. Evie is smarter than that. She is going to take care of it on her own, and she tries her best. Cailey is an incredible young performer and deals with the fear like a champ. She is probably one of the smartest characters in a horror story I have seen in a long time. The story and direction of the segment are also incredibly well done. While “Grey Matter” builds up to something big, it isn’t apparent where this story is headed, and that’s what makes it so effective.

The television adaptation of Creepshow keeps in the spirit of the original films. The horror stories from EC Comics inspired the movies, and the first episode of the show is no different. There is a strong sense of horror within the stories, but they are also a lot of fun. It is “The Most Fun You’ll Ever Have Being Scared.”

A new episode of Creepshow drops every Thursday night only on Shudder.