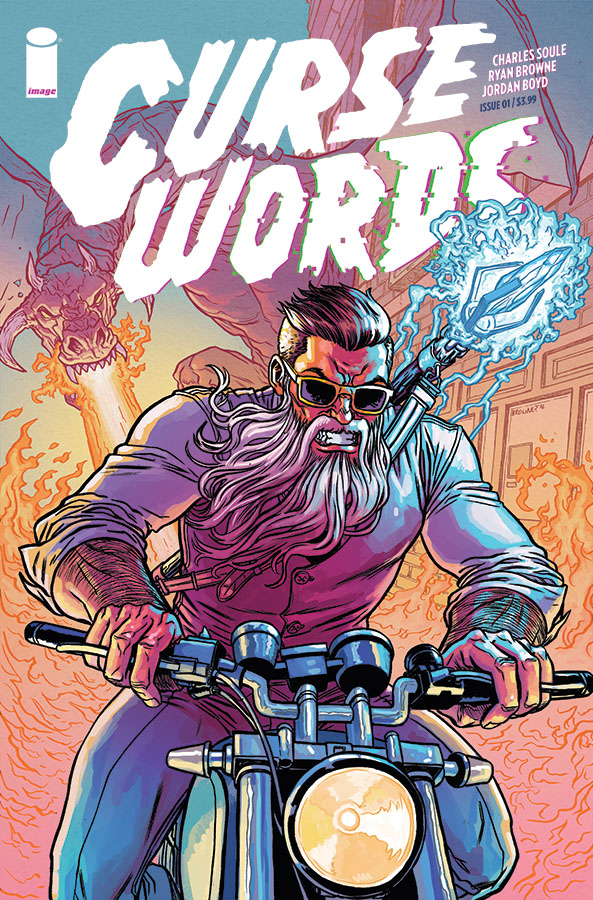 Wizards have been a hit in the realm of pop culture for a very long time. From the Wizard of Oz, the backwards spelling speaking Zatanna, the pages of the sorcerer supreme, Doctor Strange, the iconic Gandalf in the realm of J.R.R. Tolkien to the empire known as Harry Potter and Fantastic Beasts and Where to Find Them, we have seen our fair share of magic users. With Curse Words, we get a very edgy, very rooted in our reality wizard that can sling spells with the best of them.

From writer Charles Soule (Daredevil, 27) and artist Ryan Browne (God Hates Astronauts), we see a wizard in the present day, but this is no boy wizard with morals of gold. Meet Wizord, and through this issue, we not only get a glimpse of his powers, we also see who he is, where he came from, why he’s here, and how he ended up with Margaret the talking koala bear. Soule and Browne create such a zany, entertaining first issue, complete with a likeable “heroic” duo in Wizord and Margaret, and completely off the wall antics. A platinum pop star that wants to go platinum literally? Check. A fantastical battle between mystical beings? Check. Demonic beings plotting behind the scenes? Check.

I’ve been a fan of Soule before his Marvel days, back when he created a home run at Image with the smash mini series “27”. Soule gets to let loose in this creator owned series, and does he ever. The world building done in this issue alone is fantastic, as is the history of the world’s favorite wizard. For the artwork, if you aren’t familiar with Ryan Browne, then I have three words for you: God Hates Astronauts. The Kickstarter sensation turned Image Comics series was an instant favorite of mine, as it was filled with colorful characters and bizarre situations. Browne’s creative juices overflow with Cruse Words, and with this being only the first issue, I can’t help but think what the future issues will hold.

Image Comics has been knocking out home run after home run for this new year. In 2017 alone, I have read some of the best debut issues in recent memory. Curse Words now joins those ranks, and depending on how this series goes, this could be a strong contender for one of the best series of 2017. Already sold out with a second print on the way, I can’t stress the quality of this book and how hooked you will be upon reading this mystical debut. Magic has a new name, and he’s ready to beat down any boy wizards in his way.