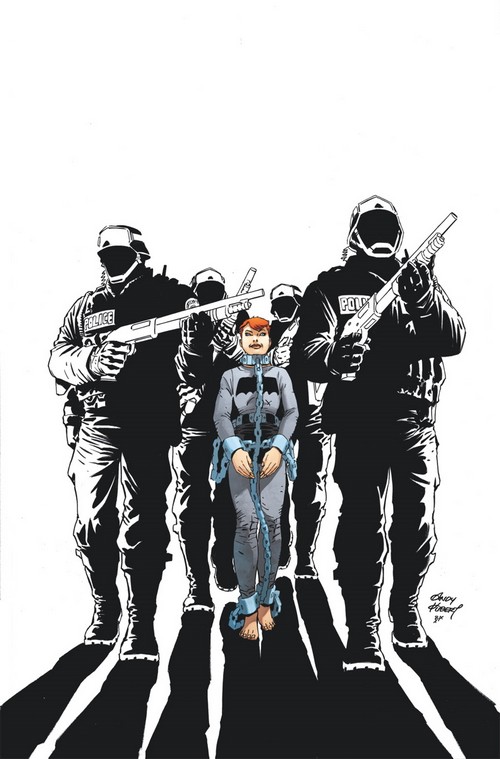 (Victor Valley)—With the second issue of DK III: The Master Race, the story kicks into gear as Carrie Kelly faces massive jail time, we get a glimpse into Bruce Wayne’s fate, and we see why the story is call The Master Race. Are you ready for the next installment to Frank Miller’s classic?

Good, because man, it delivers.

Written by Brian Azzarello and Frank Miller, with art by Andy Kubert, we start right where we left off last issue: Carrie Kelly, the former Robin, was arrested as she fought with Gotham Police dressed as the infamous Batman. Kelly gives her account on what happened to Bruce Wayne following the ending to the Dark Knight Strikes Again, so we see her version, or at least the story she is giving. We also see the Atom working with Superman/Wonder Woman daughter Laura on making the miniature bottle city of Kandor inhabitants brought to human size, which looks to be a huge part of the series. By the end of the book, we see explosive events to both storylines, and a last page that once again has everyone talking. With the mini comic inserted into this issue, we see more of one of the trinity, Wonder Woman, as she talks to her half Kryptonian daughter in the heat of battle.

Azzarello and Miller’s story is absolutely addicting. This series feels far more like a true sequel to Frank Miller’s Dark Knight Returns, and incorporates other characters in the DC Universe without it feeling forced. Kubert is the perfect choice here- he retains the style Miller set all those years ago, but continues his high quality artwork with his own footprint and creates so many memorable panels per issue, its astounding. This is an amazing sophomore issue, and it once again leaves fans wishing the next issue was already on the stands.