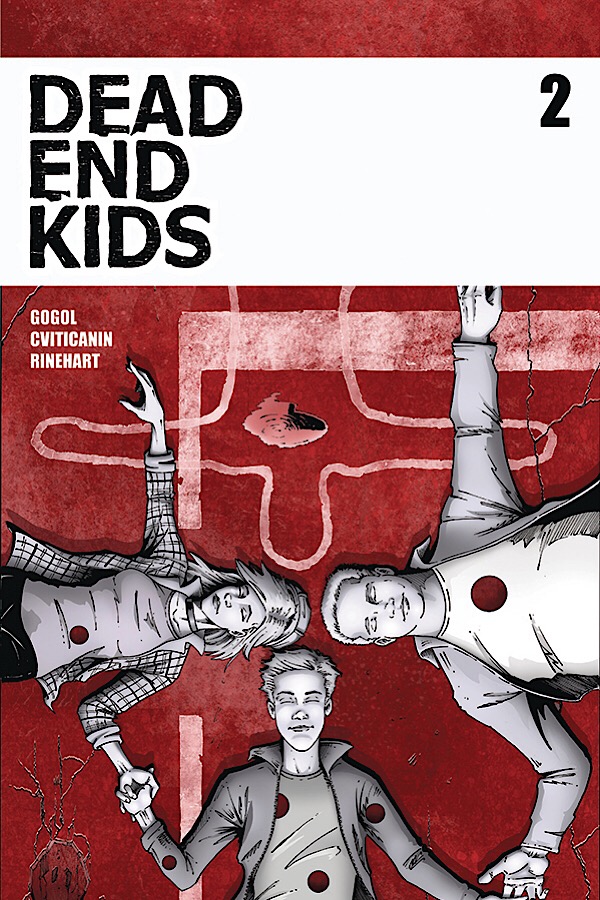 Dead End Kids kicked off with death and mystery, so I have been waiting to continue the journey of a band of kids out to find out how their friend died. With issue #2, we dive deeper, and learn more about the past of these kids, and what has shaped their lives into what it is now.

By Frank Gogol, Nenad Cviticanin and Sean Rinehart with a cover by Criss Madd, the book picks up with the group looking to find out who killed their friend Ben. It leads them to Bulmer, a local bully and deviant, as they end up face to face with him. Murphy, Tank, and Amanda end up in a situation that continues to go further and further down the preverbal rabbit hole. Twists and turns abound as we not only get insight into the background of each of the leading group but even a look into Bulmer’s past.

This is a powerful and emotional issue. We see some extremely hard to deal with tragedies and how each kid has dealt with their particular problems. By the end of the book, the mystery deepens, the stakes are raised, and with the conclusion hitting in the next issue, we are bound to get a serious and probably tragic last issue. Gogol’s writing is top-notch, as he creates some of the most emotional moments I have seen in a comic book. Cviticanin’s artwork sets the tone perfectly and conveys such emotion in the linework, and in the colors used.

This rag-tag group of kids have such heart and endure so much. I work for a school, and I see kids that experience similar issues and more all of the time, carrying the weight on the shoulders every single day. Gogol and the group capture the emotions of the youth perfectly. Dead End Kids #2 is a home run, and I cannot wait for the third and final issue.