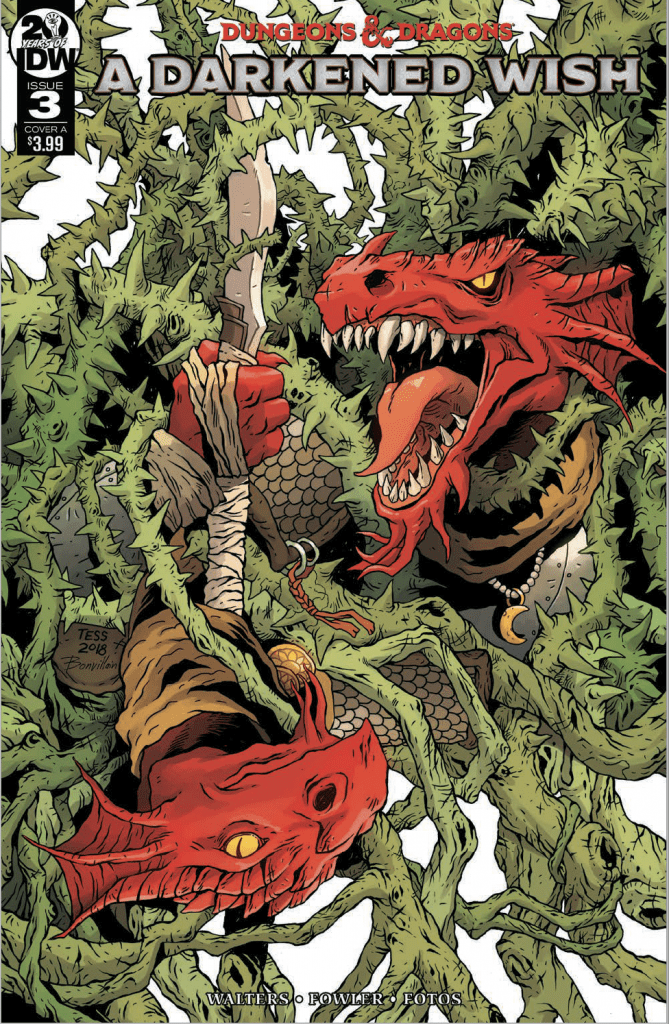 Starting out, we see a battered and bruised lady with red hair being rescued, by what I believe to be a Kenku, from the wreckage of a ship. We then cut to a dock full of people with more being placed from rowboats after what looks like a battle in the harbour. Everything seems pretty bleak here until the same Kenku from earlier touches down, bringing with him an unconscious lady with red hair, otherwise known as Helen.

The Kenku, who goes by the name of Solivigant, starts chanting an “…old Elvish prayer.” focusing on a diamond over the body of Helen. A moment later, she wakes up, shouting out, “Shandeir Look Out!”. There is only a moment a joy; however, at the reawakening of Helen as the reality of the situation dawned on everyone about what happened in the harbor. After a brief but heated discussion, Helen and Solivigant fly westward to see if their home is okay.

After finding out the fate of her home, she leaves via a ship. Later we see Helen communicate with a particular deity whom she makes a deal with while she travels to the Moonshae Isles. As soon as they arrive, they are spoken to by a soldier who tells the crew about a village being overrun — believing it to a trap the soldiers have not gotten involved. The group of adventurers decides to spring the trap anyways. Next thing you know, the party arrives at the village only for something interesting to happen that I had not expected, but thanks to my D&D experience was at the same time not too much of a surprise, but a pleasant and inspiring read through nonetheless.

The rest of the comic plays out like any encounter of D&D I have ever experienced. Some players usually fight with swords and magic. While some are deciding to team up, with one using polymorph and the other going along for the ride, all the way to the boss of the quest. Utilizing some great rolls and remembering to use special abilities to bring about a great conclusion.

The artwork of this comic is dark and realistic. I love the detail they go into showing you how battered and bruised someone is. The background showing certain areas are well-drawn and give the right sense of hopelessness while also giving you hope in certain scenes. Nothing is distracting or takes me away from the story at hand, and everything is used to tell a compelling story.

The pacing of this felt like there were parts left out. I understand that you can’t show every little detail of what happens. I don’t want to see them sleeping for eight hours or eating three times a day. There were times when it seemed like they expected the reader to know or understand what exactly was going on. I think it would be nice to have a small box to briefly explain some details, for example, how did they get from the ship to the village? How did they get back from Helen’s home onto the boat?

If you have ever played D&D before, you can for sure see this as if it was being played out over the tabletop. Some areas felt like someone had rolled a Nat20 and areas where someone failed a saving throw. Especially the last few pages of the comic, from when the soldier tells them about the village, all the way to the end. It all felt just like a group of people had played this out, and this is the shortened version of that story. Even the battle at the end felt like a D&D battle and even gave me a flashback to a recent boss battle in my current campaign.

Jeremiah Gagnon is a happy-go-lucky goofball of a guy with a passion for all things Super Heros and Comic Books. He is also a Dungeon Master for an all-female actress, Dungeons and Dragons campaign. Gagnon is an amateur Magician, as well. He currently lives in Vancouver, WA. You can follow him on Facebook, YouTube at PressXForAwesome, and Instagram @unicyclezombie.