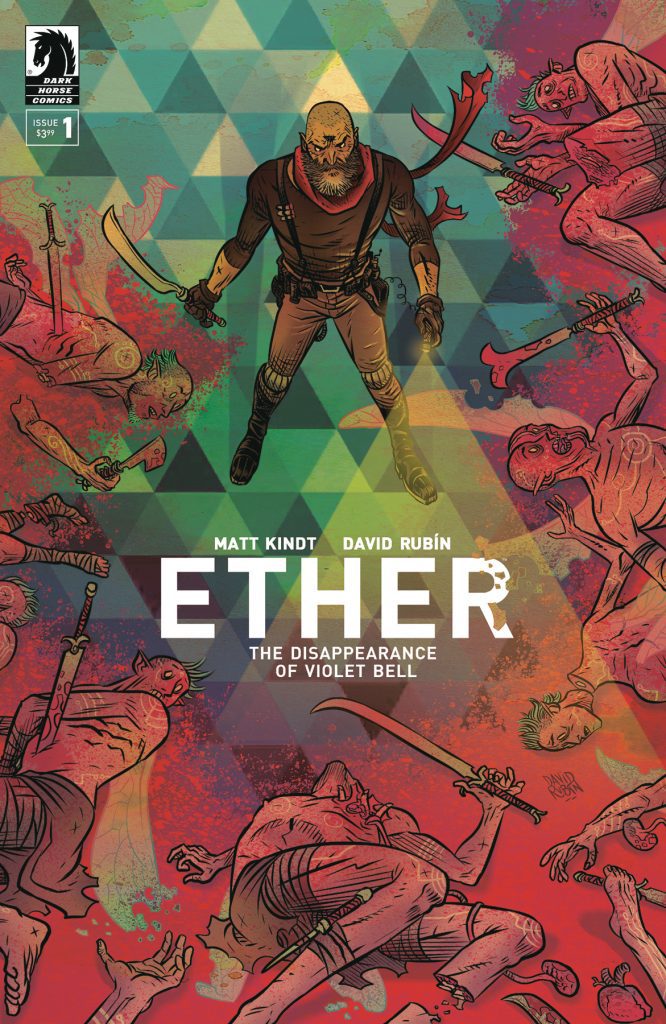 I have loved the two previous series of Ether from Dark Horse Comics. With the start to the third series, we get a very different and dark tone, and I am extremely intrigued. Welcome to Ether: the Disappearance of Violet Bell.

From Matt Kindt, David Rubin and Kike j. Diaz, this series starts off on the dark side of things. Years have passed since we last saw Boone Dias, the human that can travel between our world and the Ether, a magical world full of mythical creatures and cultures. But it seems like something significant happened to Boone, as he has exiled himself to the Ether. When the Fairie King approaches him with news of the Ether starting to fall due to a new leader, it doesn’t really phase Boone. But when the King informs Boone that his daughter, Fairie Princess and longtime friend of Boone, Violet Bell, has been taken, that sends him off on an adventure once more.

We see the bloody crime scene of the kidnapping and end with a cliffhanger from there. It is always awesome to revisit the characters from this book, as they are all amazingly unique. Kindt knows how to draw you in, and this book does just that. We know Boone neglected his wife and daughter, devoting his time to the Ether, but what did he do in the Ether that was so horrible? Rubin’s artwork is always a joy to see; he captures such raw emotions in his expressions and what he conveys panel by panel.

I am entirely on board for this next round of Ether, as it looks like the stakes couldn’t be higher.

Tags: Ether: The Disappearance of Violet Bell #1 Review: What Matters