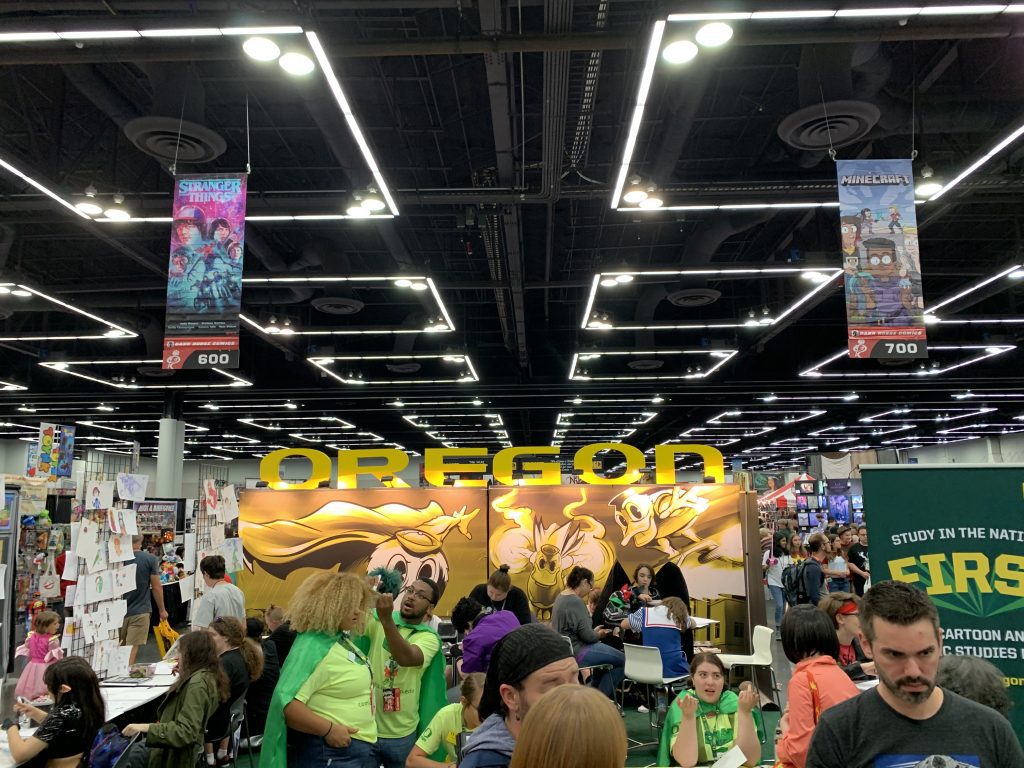 The worlds of comics, toys, cosplay, movies, television, and celebrity collided in Portland this weekend for the annual Rose City Comic Con. From its humble beginnings in 2012, it has grown into one of the most significant pop culture events in the Pacific Northwest. The con has gone from a tiny 17,000 sq. feet venue in its first year to completely filling the Oregon Convention Center (120,000 sq. feet!) every year after that. People from all over the United States and beyond travel to Portland to check out the con, and it’s not hard to see why.

Some of the biggest names in the comic book industry attend every year, and this year was no exception. Oregon’s own Oni Press and Dark Horse Comics were on hand to promote their new books and classic series, including Stumptown, Scott Pilgrim vs. The world, The Umbrella Academy, and Hellboy. Stumptown creator Greg Ruka was there to sign books and talk to fans, as well as The Umbrella Academy artist Gabriel Ba.

Some other publishers in attendance this year were Mad Cave studios, Stranger Comics, Source Point Press, Upshot (an imprint of AWA), and Scary Tales Publishing.

The University of Oregon had an incredibly cool booth set up at the very front of the showroom. They offer the nations first Cartoon and Comics Studies Minor, which at a show like this, drew a lot of interest from the crowd. Over at the CDLDF (Comic Book Legal Defense Fund) booth, I was able to speak with them a little bit about the issues facing censorship, even today, when it comes to comic books and what our children are allowed to read in schools. The short of it is that censorship still exists and that they are doing what they can to fight it. If you are interested in learning more either of these programs, check out Oregon University at comics.uoregon.edu and the CBLDF at cbldf.com. 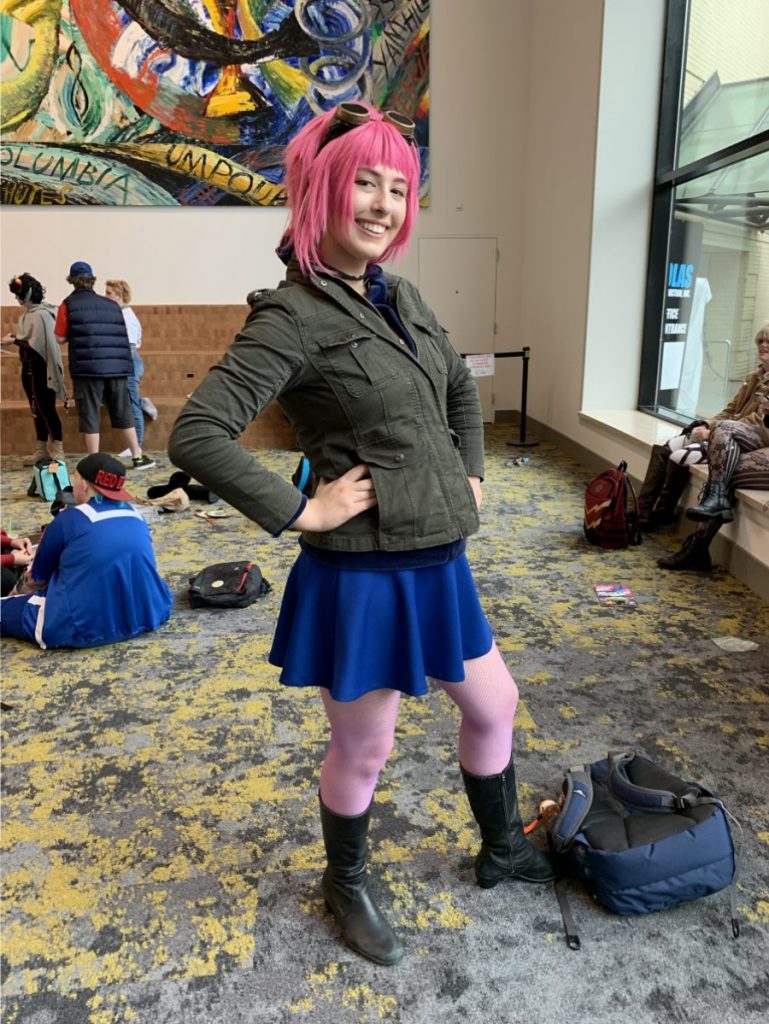 On the family side of things, there was plenty of activities to do in the Rose City Jr. section of the con. From learning weird science with the Mad Science of Portland and Vancouver group, to making your very own ectoplasm, there was something for everyone. There was a rock-climbing wall, a Lego group showing off their awesome builds, and even the opportunity to build your own Bowtruckle from Fantastic Beasts and Where to Find Them. Storytellers and crazy scientists also took the main stage in the Rose City Jr. section to entertain children of all ages. Storyboard artist for Disney Channel and Nickelodeon, Jonathan Hallett, was also present to show off some of his fantastic artwork to everyone in attendance.

Portland Retro Gaming brought classic games back to the con this year as well. From the Super Nintendo to the original Xbox, they offered a variety of games and events to keep even the most avid of gamers happy. Courtesy of Ground Control, a retro arcade in downtown Portland, they also had a room full of classic arcade games and pinball machines. If you’re a gamer, you definitely found something to love here.

Speaking of celebrity, at RCCC first, the television version of Oni Press’s very own Stumptown premiered at the con. A Q & A followed it with the books creator, Executive Producers Jason Richman, and Matt Olmsead, as well as cast members Michael Ealy, Camryn Manheim, Tantoo Cardinal, Adrian Martinez, and Cole Sibus. The show will premier on September 25th on ABC. 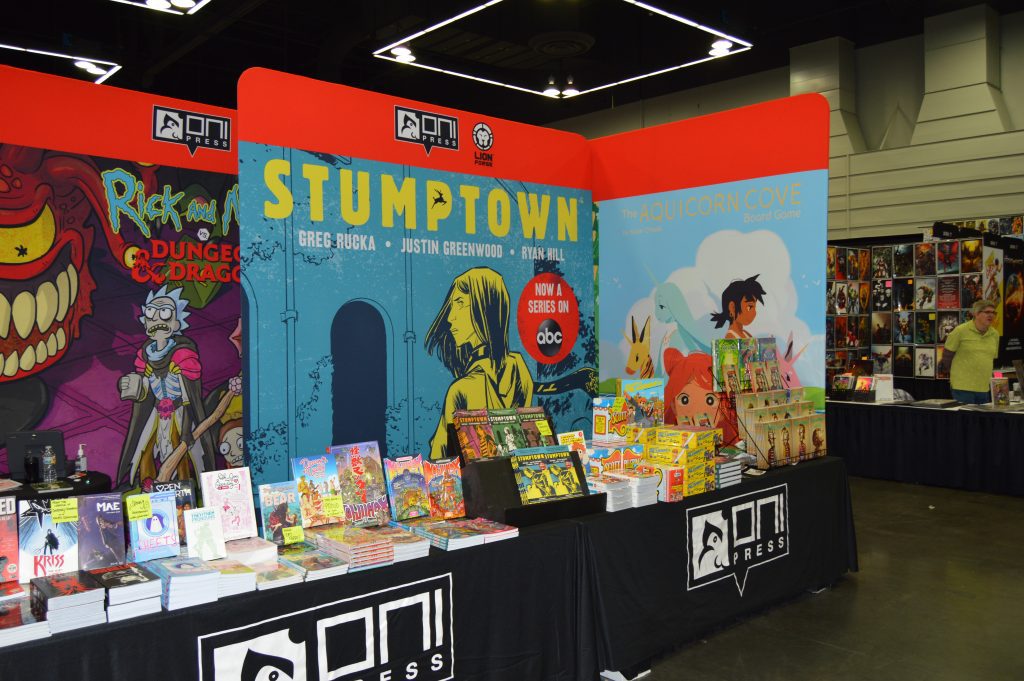 There was also some fantastic panels this year. In Shannon Elizabeth Saves the World, the actress spoke about her career and her work saving endangered species from poachers in Africa. Return To Hogwarts featured Jason Isaacs, Matthew Lewis, and Dan Fogel as they took fan questions about working in the world of Harry Potter. Cary Elwes, Chris Sarandon, and Wallace Shawn took the stage for a Princess Bride panel and paid tribute to their late co-star Andre the Giant. The stars of The Office reminisced about the show, and Zachary Levi was more than excited to talk about all things Shazam and his career.

And of course, what would a Con be without cosplay. Cosplay, cosplay, cosplay everywhere! Some of the most creative, ingenious, creative people put their best on display this year, and it was incredible. From Buzz Lightyear Stormtrooper to Batman and Shazam, there was no shortage of creativity this year.

Rose City Comic Con continues to impress every year. With its wide variety of activities to do and the incredible variety of talent to discover and to meet, there is never a dull moment. I’m glad I got to attend this year, and I can’t wait to see what the future holds for this incredible event. For more information on the Rose City Comic Con, visit https://rosecitycomiccon.com/.