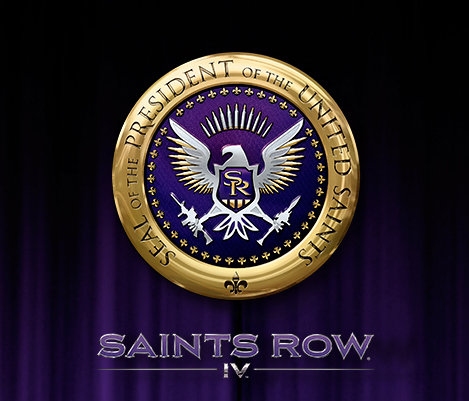 Future US, a leading digital media and content marketing group, and Deep Silver have partnered to bring you into a world Better than Real Life, with the launch of www.saintsgov.com – the official website for the Saints administration in Saints Row IV!

The Saints are once again thrust into the lime light:  only this time, they aren’t viewed as dangerous criminals; they’re heralded as patriots.  Riding their wave of popularity, The Leader of the Saints decides to run for the highest office… and won!  Now the President of the United States, the boss has gone from the crack house, to the penthouse, to the White House.

· Steelport Scanner – keep up with the latest Steeport criminal activity such as a 60-year-old man in a leopard print speedo robbing a convenience store with a 25 lb. sex toy

In the next open-world installment of Saints Row, Deep Silver Volition continues the story by elevating their status to the highest level – the leaders of the free world. In Saints Row IV, the head honcho of the Saints has been elected to the Presidency of the United States. Now the larger-than-life insanity of the Saints series gets a new twist with a catastrophic alien invasion. With intensified action and enhanced customization, players can use their newfound superpowers and leap over buildings, outrun the fastest sports cars, or send enemies flying with telekinesis in the greatest, most insane installment of Saints Row yet. Save the world, Saints Style. For more information please visit www.saintsrow.com.

About Deep Silver
Deep Silver develops and publishes interactive games for all platforms, seeking to
deliver top-quality products that provide immersive game experiences driven by the
desires of the gaming community. The company has published more than 200 games
worldwide since 2003, including the best-selling zombie action Dead Island™ franchise,
the critically-acclaimed Metro™: Last Light and this summer, it will publish the fourth title
in the action adventure open world Saints Row series, Saints Row IV™. Deep Silver is a
wholly-owned subsidiary of Koch Media, GmbH, and includes the renowned
development studio Deep Silver Volition, based in Champaign, IL. For more information,
please visit www.deepsilver.com or follow us on twitter at @deepsilver.

About Future US
Future PLC is an international media group and leading digital publisher with over 200
publications, apps, websites and events worldwide. Future holds market-leading
positions in Technology, Entertainment, Music, Creative and Sport & Auto sectors
attracting 50 million monthly global unique users to its sites, including techradar.com,
gamesradar.com, bikeradar.com and musicradar.com. Additional information about
Future can be found at www.futureus.com.