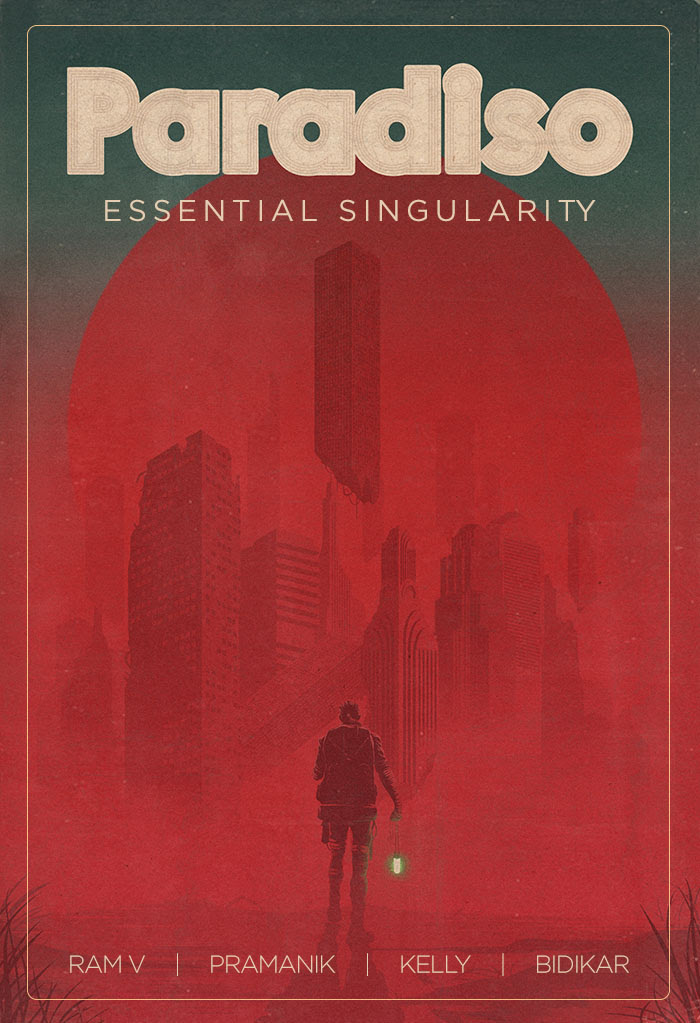 Centuries ago, civilization collapsed in a single cataclysmic event known as The Midnight. Now, it seems humanity is only able to thrive in one place: a living, breathing city called Paradiso. And it seems it’s drawn Jack Kryznan, a man haunted by fragments of old memories—and in possession of a mysterious device of awesome power—to its gates.

Fans can find a special Book Market Edition cover of PARADISO, VOL. 1: ESSENTIAL SINGULARITY (ISBN: 978-1-5343-0883-1) in bookstores on Tuesday, May 22nd. It can be preordered via Amazon, Barnes & Noble, Indiebound, Indigo, and Books-A-Million.

“The sort of comic where every panel contains a world. Savour it.” —Kieron Gillen (THE WICKED + THE DIVINE)

“This book works on so many levels.” —Multiversity Comics

“Dev, Dearbhla, Alex, and Aditya are an impressively harmonious art team—inks, colors, and letters merge and move in beguiling unison to create a captivating singular vision. Imagery from PARADISO has been bouncing around my head for days, weeks, months after reading. Unique, exciting work by all.” —Tradd Moore (LUTHER STRODE, Venom, Ghost Rider)

“PARADISO is an ambitious, tense and textural body of work. Ram, Pramanik, Kelly, and Bidkar have created a tangible world; you can feel the rusty walls, taste the dusty air, kick the dirt beneath your feet. Welcome to Paradiso.” —Declan Shalvey (INJECTION, SAVAGE TOWN)

“This is a funky bit of sci-fi with plenty of secrets to unfurl in the coming chapters—definitely worth checking out.” —The Oregonian

“This is warm, human, beautifully-executed science fiction, building an intricate world with subtlety and grace. First it draws the reader in, then it grips them by the throat. I’m hooked.” —Al Ewing (Royals, The Ultimates, New Avengers)

“PARADISO is a strange trip. It’s not about cool heroes or epic fights, but rather haunting images of death, destruction, and loss. The robots, androids, and mechanical men who populate the pages are the stuff of nightmares. Its vision of the future feels like the works that came out in the 1980s, in a good way. All this is to say that PARADISO feels all at once nostalgic and totally unique.” —Nerdist

“A novel disguised as a comic book, PARADISO takes the best bits of Western & Eastern comics and fuses them together into a visually stunning, yet utterly dystopian, sci-fi tale.” —Ryan O’Sullivan (VOID TRIP, The Evil Within)