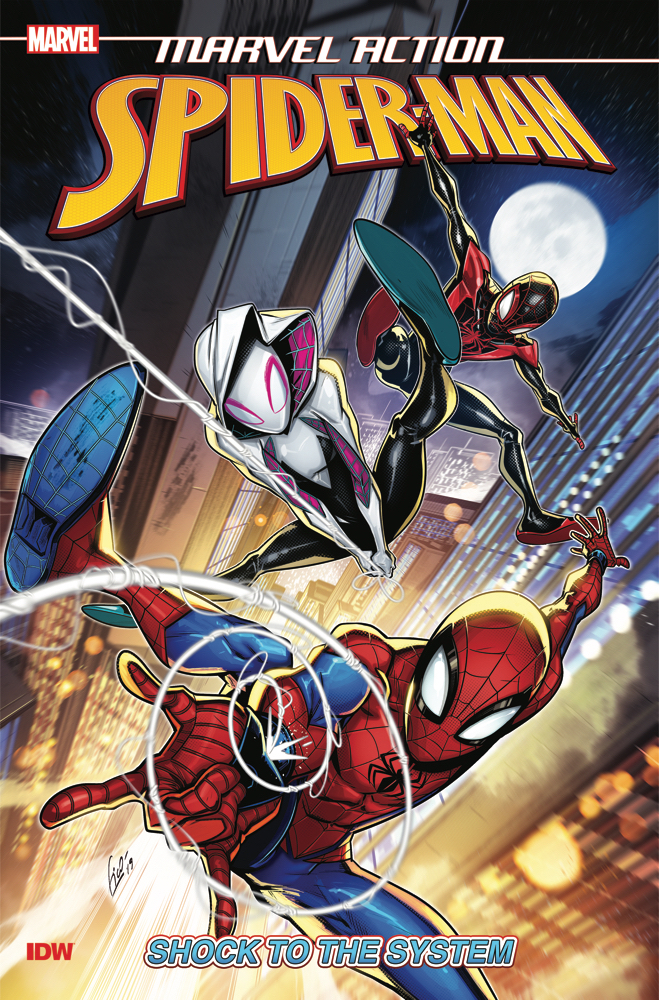 For today’s review, I check out Spider-Man: Shock to the System from IDW Publishing. The book is by Brandon Easton, Fico Ossio, Ronda Pattison, and Shawn Lee. The comic book opens up with a sneak peek of things to come right before traveling back in time to the day before; we see Gwen Stacey and Miles Morales sitting in class learning about earthquakes. Miles talks to their instructor Mr. Shultz who offers to tutor him with his parents ‘ permission privately and Miles is ecstatic about the offer.

While this is going on, Tony Stark calls up Peter Parker to enlist him and the other two spider people to help track down some missing technology. Peter accepts this as he swings off. Moments later, while Stacy and Miles are ripping on each other, Spider-Man swings down to tell them about the job from Mr. Stark, and off they all go.

While they cruise around on the lookout, Peter decides this is a great time to test his new spider tracers. Unfortunately, they don’t work as he was expecting them to.

The next day the gang meets up at a Stark Research Laboratory, where they enter through the roof access that opens up for them. After a shocking encounter, the battle with their new foe takes them out of the building and quickly into a car chase. Gwen and Miles save the civilians while Peter chases on, never losing sight of the getaway vehicle. This is where we come full circle with the first page. What happens next is sure a shock to the system for our spider heroes.

The rest of the book focuses on Peter, Gwen, and Miles locating the bad guy and how to defeat him. This story is relatively simple; the bad guy has a goal and tries to achieve his goal in dastardly ways, only for the heroes to stop him. The bad guy doesn’t seem to have ulterior motives for doing what he is doing and even states why he is doing the bad things he’s doing. He makes good on his threats too.

The artwork of this is really nice to look at. It isn’t overloaded with details, and it is detailed enough that you can tell who is who without needing to be reminded who each character is.

I like that they place each of the main characters speech bubbles in their own color scheme similar to that of their costumes, they also do this with their thought bubbles, and when showing us their group chat while texting, they use simple colors to notate who is texting. Their use of colors is well done, and I am never at a loss for who is speaking at which time.

The action in this is also really well done. The stakes made with each confrontation make me believe that something terrible will happen if the heroes don’t do something. Sometimes the heroes mess up, and they get emotional about it.

The banter between the trio also had me laughing out loud on several occasions. Peter is like the dad with his dad like jokes; Miles is like the son or best friend who always goes along with the father figure and looks up to him with a gleam in his eye, even adding to Peter’s jokes. Gwen is like the sister or aunt and adds to the humor with her comments and sarcasm about the other two, but deep down, she is happy to be fighting crime with them and teaming up as if she found her place. I can see that they are connected in more than just that they each have spider-like abilities. They care for each other and want each other to succeed in life; they are a family; they are best friends.

With the story being made for middle-grade readers, the writers had to go with a more simplistic approach so that their target audience could follow along easier. They didn’t want to add anything too complicated to this, and they needed to keep the action going. Due to this, their heroes had simple issues they needed to take care of outside of hero work, and the bad guy had desires that didn’t stretch beyond the standard “I wish to rule” bad guy trope. I prefer my stories to have more nuance and underlying plots that carry on past the current storyline. Having a cliffhanger at the end to tease us of what is to come next would have been a nice touch, and having issues with the heroes and bad guys that didn’t get resolved before the final page would have been an excellent way to keep the series going. This also focuses more on Miles and his life rather than all three of them. They could have easily teased something going on in Gwen’s and Peter’s home life that would eventually be taken care of in later comic book issues.

Another thing that I wish would be addressed is the name of the series. It’s called “Marvel Action Spider-Man” and is about a team of heroes rather than just a single guy. Granted, they focus more on Miles than the other two, with the title being what it is, it gives me the impression that this is a solo Spider-Man story, not a team story. Having a title that focuses on the three of them would be a little nicer. I personally grew up with Peter Parker being the only Spider-Man, and I know very little of Miles and Gwen, so having some distinction that this is about more than just a single spider person would be a nice touch.

The last thing that I didn’t like is that the reveal of who the bad guy really is at the end was predictable for me. Especially when they basically hinted at who the bad guy was pretty early on.

Overall, I enjoyed this story. It’s a nice change of pace to see Peter working with a team of other spider heroes and how well they interact. Peter still has his personal issues, and Gwen and Miles have their high school problems. It’s a friendly call back to the original “Amazing Spider-Man” run when Peter was in school and had to juggle being a superhero and a high schooler. I am eager for more stories with this trio of web-slinging wall crawlers.