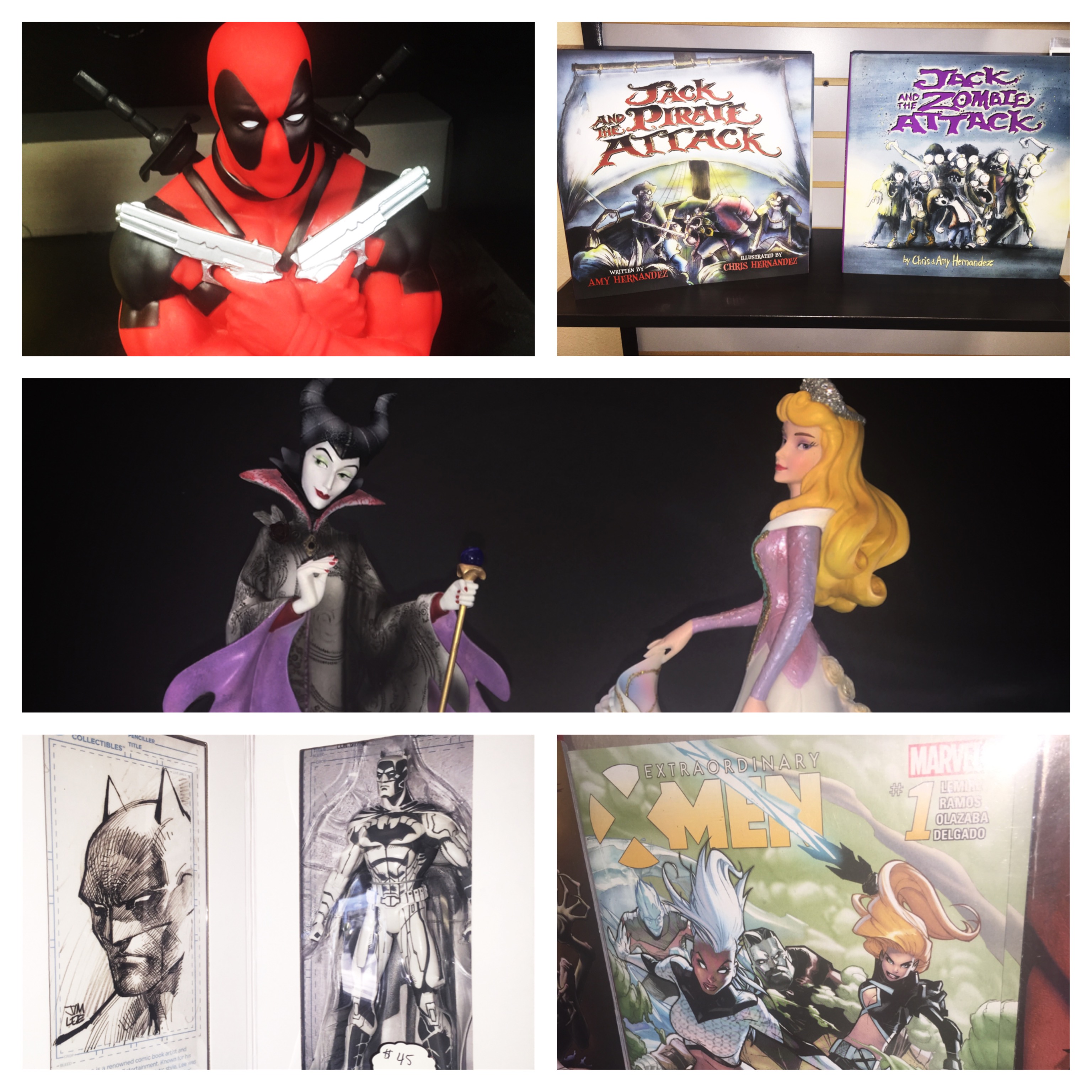 (Victor Valley)– The holidays are here, and you most likely have someone in your life that is into “geek” culture- comic books, movies, video games, all that fun stuff. Well, we decided to help you find that perfect gift with our Holiday Geek Gift Guide 2015! For our selections, we went local and reached out to our two amazing comic book shops in the High Desert: Comic Cult HD and QBC Toys and More! All items are available at the shop listed in the captions; buying local is always the way to go! So, let’s get to it, here’s our picks!

(Thank you to Comic Cult HD and QBC Toys and More for all of your help!)

Deadpool by Joe Kelly- The Omnibus

The Merc with a Mouth is on fire. Marvel’s masked funny man has risen to popularity that no one could have ever imagined since he first debuted back in The New Mutants, and this book shows when Deadpool went from cool to certified fan favorite. Written by Joe Kelly, this massive collection has the writer’s run on the ongoing Deadpool series, collected in a hardcover so hefty, Deadpool himself could use it as a weapon.

Jim Lee is arguably one of the greatest artists to ever grace the four color pages of comic books. With this awesome, Comic Con exclusive figure from DC Collectibles, shows Lee’s amazing style transformed into an action figure- literally. The figure, which comes in a flip open window box, is all black and white, with Lee’s intricate line work in 3D form.

It’s the most powerful weapon in the Marvel Universe, and now, it can protect you, and your spare change. Marvel’s Infinity Gauntlet is now a rotocast coin bank, complete with the five power gems. The artifact from the classic stories like The Infinity Gauntlet and The Infinity War, and more recently gaining more fame in the Marvel Cinematic Universe, as well as the current Secret Wars title, this is a must have for fans of the mad titan, Thanos.

Yo Joe! The animated classic has come back as Pop Vinyl figures from Funko! The first series feature Cobra Commander, Roadblock, Snake Eyes and Storm Shadow, and features box art that pays homage to the classic toy packaging. Pop Vinyl’s are a huge hit, as they span so many properties: from comic book characters, TV series, movies, sports, cartoons, and more, there’s virtually a Pop Vinyl everyone can enjoy.

The latest X-title to receive a reboot from Marvel, the Extraordinary X-Men has been a massive hit, with only two issues released so far. With a team composed of Storm, Jean Grey, Nightcrawler, Colossus, Magik, Iceman and Old Man Logan, this is the X-title to be reading. Written by Jeff Lemire and art by the animated Humberto Ramos, both #1 and #2 are available now and will satisfy any fan of Marvel’s children of the atom.

From Arachia Entertainment (which is now a division of Boom! Studios), Mouse Guard is a book all ages can enjoy. David Petersen’s epic stories of mice sized heroes in a far different land, there are quite a few Mouse Guard collections out, all which would make a perfect gift. Created as beautiful hardcovers, these books would look terrific under the Christmas tree.

With the series of Marvel relaunches comes a new start to the zany new Avenger, Deadpool! Full of slapstick humor, fourth wall breakthroughs and now, a team devoted to being the best Deadpools they can be (for a price), any fan of ‘Pool would love to get on board with the latest series from Marvel Comics.

Who doesn’t have a Disney fan in their life? Then take a look at the detail and paint applications on these amazing Disney collectibles, featuring Maleficent and Princess Aurora from the animated classic, Sleeping Beauty!

Are you seeing a pattern here? You should be, as this is the third Deadpool pick on the list. Why? Maybe it’s because the Deadpool movie is mere months away, opening on the Valentine’s Day weekend. Maybe it’s because Deadpool is everywhere in comics these days: he’s an Avengers, a solo “hero”, and the inspiration for the super popular mash up, Gwen Pool. Or maybe, it would just look awesome to have the crimson mercenary guarding your loose change.

Just in time for the largest film opening this year, Disney Stores have created a die cast line of action figures, Star Wars Elite, with an emphasis on the latest installment of the franchise, The Force Awakens. The die cast First Order Stormtrooper is one heavy, sturdy figure, with all the detail seen in the latest incarnation of the Stormtrooper.

What are Heroclix? An awesome, collectibles miniatures game that features a wide array of licenses, including the ever popular Marvel and DC universes. Featuring uncanny paint apps, a vast character selection, and rare pieces that help in playing via the Clix system, Heroclix are wildly popular, with the latest series being DC Comic’s Superman/Wonder Woman- featuring characters from both character’s storylines, as well as rare pieces from the Elsewhere classic, Superman: Red Son. Comic Cult HD is the place to find these, and many more Heroclix. Want to play too? They have tournaments as well!

The two hardcover children’s books from Apple Valley residents Chris and Amy Hernandez are now available at QBC Toys and More. Both books feature Chris’s painstakingly detailed artwork and Amy’s meaningful prose, and both have moral that kids these can learn from and enjoy at the same time.

The popular DC miniseries has been a hit with fans since its release, and continues to build up steam. Toggling between the past and the present, we get a good, hard look at the Bat-verse, and those that live in it. From the modern times, as Dick Grayson teams with past Robin’s Tim Drake and Jason Todd to take on the ominous “Mother”, to the past, where we see Batman and Grayson’s Robin team up to face the villainous Scarecrow.

As the new movie looms closer and closer, we cannot forget the past, and who would want to? Now available at QBC Toys and More, they have some vintage Star Wars figures in great condition. From the bounty hunter Boba Fett, Stormtroopers, Tusken Raiders, Jawas, and Darth Vader himself, these are nostalgic gift ideas guaranteed to be strong with the force this season.