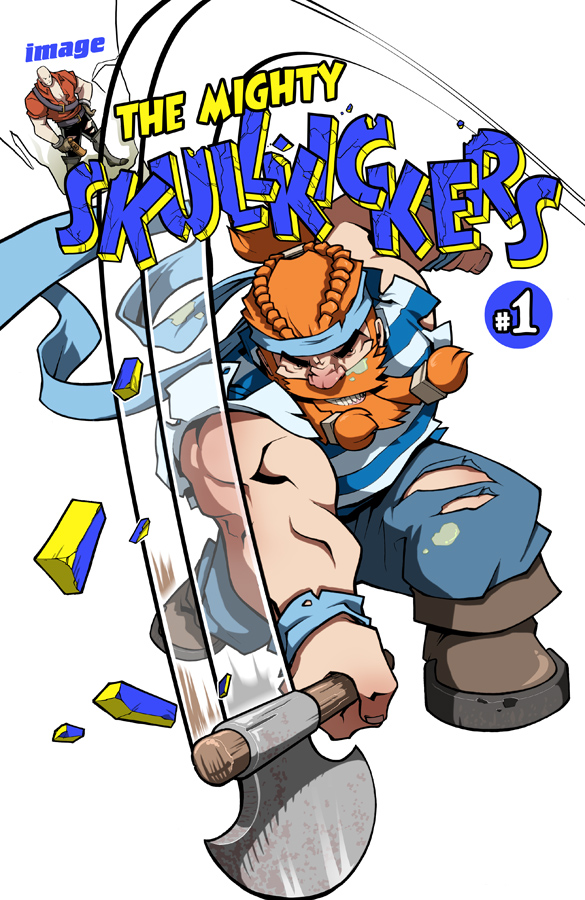 Image Comic’s zany, action busting series Skullkickers is back with another homage to the house of ideas. This time, the series gets mighty with a throwback to the God of Thunder. Awesomely well done, I gotta say I am loving this homages (Uncanny, Savage and now Mighty). Here’s the official word from Image:

Berkeley, CA – January 11, 2013 – This April, Image Comics invites readers to keep jumping on board action and adventure with a big ol’ adjective shuffle in – THE MIGHTY SKULLKICKERS!

“After twenty issues of critically-acclaimed bone-busting adventure, we felt it was important to re-remind retailers and readers that Skullkickers is the most enjoyable adventure series in the whole crazy comic industry,” said Image PR and Marketing Director Jennifer de Guzman. “And when you need people to take notice, you reboot that $#%@ just like the big boys do.”

“Some jokes get funnier with time. Some adjectives describe a concept perfectly. When we sat down and discussed the ideas at the heart of Skullkickers, we realized all along it should have been called ‘Mighty’” says series creator Jim Zub. “Also, sales. Dirty, dirty sales.”

If you’re a diehard collector of SKULLKICKERS who’s sad that you won’t have a SKULLKICKERS #21 to add to your collection? Don’t worry, we’ve thought of everything. In addition to the regular “Mighty” cover we’re offering a special “issue #21 variant” B cover to make sure your collector streak is unbroken.

It’s back. It never left. It’s a restart that continues right where it left off. MIGHTY SKULLKICKERS #1 will be available wherever kick-ass comics are sold on April 24! Pre-order it now from the February issue of Previews.