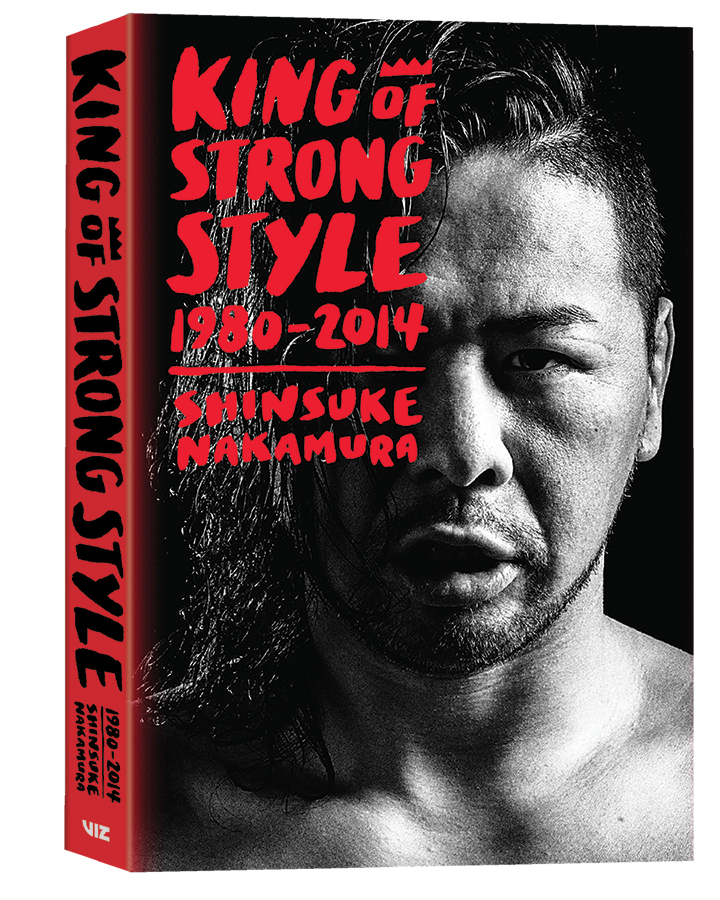 He’s one of the best professional wrestlers on the planet today, and he is part of one of the biggest matches for the WWE’s Wrestlemania 34, taking place this Sunday. Just in time for the grandest stage of them all,  VIZ Media, LLC (VIZ Media), a premier company in the fields of publishing, animation distribution, and global entertainment licensing, reveals the cover for the English-language edition of Shinsuke Nakamura’s KING OF STRONG STYLE: 1980-2014.

Originally published in two paperback volumes in Japan, (1980-2004, 2004-2015), the autobiography of one of Japan’s greatest professional wrestlers, Shinsuke Nakamura, will be released as a single-volume hardcover print edition as well as a digital edition by VIZ Media on August 8th. Both hard copy and digital releases will feature select color and b&w photographs.

For those not familiar with Nakamura here in the United States, the man took over the NXT brand, claiming the Heavyweight Championship before heading to the WWE’s Smackdown Live, where he has been one of the headliners since his debut. This Sunday, Nakamura fights in a dream match as he challenges Smackdown World Champion, AJ Styles, in what is sure to be a show stealer of a match. Check out a look at his journey to Wrestlemania below:

Before he became a star of American professional wrestling, Shinsuke Nakamura was Japan’s “King of Strong Style.” His autobiography traces an amazing life and career from the amateur grappling ranks to the Nippon Budokan, his thrilling matches against such legends as Kurt Angle and Brock Lesnar, his reign as the youngest IWGP Heavyweight Champion, and his success as a mixed martial artist.

“Professional wrestling is at the crossroads of extreme sports, over-the-top theatre, and pop culture, and Shinsuke Nakamura, already a huge star in Japan, is seeing his star rising fast among millions of U.S. fans,” says Masumi Washington, Sr. Director, Publishing Production. “His autobiography, a riveting story depicting one man’s quest to conquer the world both inside and outside the wrestling ring, is a unique and special addition to the VIZ Media catalog.”

For additional information on KING OF STRONG STYLE: 1980-2014 or other anime, manga and literary titles distributed by VIZ Media, please visit viz.com.