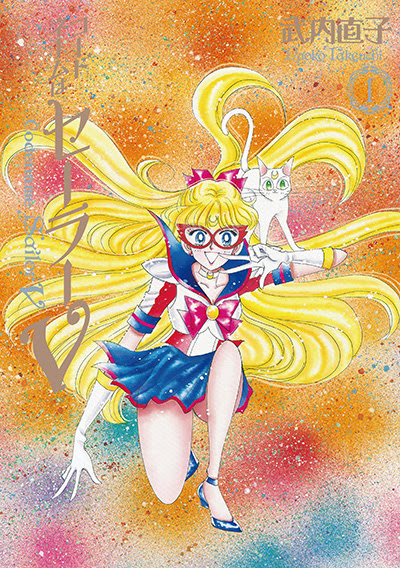 Kodansha USA Publishing revealed details of their lineup of print Kodansha Comics and VERTICAL releases from June 2020 to January 2021, as distributed by Penguin Random House.

Details on all debuting titles can be found below!

Who will love it: New fans of Sailor Moon looking to read the series that started it all, and longtime fans looking for the ultimate collector’s item.

Before Sailor Moon, there was Sailor V! Minako Aino is 13 years old when she meets a talking white cat named Artemis, who tells her something unbelievable: With a magic pen, she has the power to transform into the elegant, masked hero Sailor V. Experience Minako’s adventures, before she became Sailor Venus, featuring a new, glittering cover, a fresh translation, and remastered interior art!

Who will love it: Fans of the classic The Ghost in the Shell manga and Ghost in the Shell: Stand Alone Complex manga & anime, who have been starved for new content for the past decade, and new fans brought into the fold by the upcoming anime SAC_2045.

Hackers attempt to assassinate a politician during a speech preaching the advantages of cybernetic prosthetics. Fortunately, Togusa is there to whisk her to safety, and the investigation leads Batou to a suspicious factory in the artificial islands in southern Japan. Meanwhile, Chief Aramaki hears of a disturbing discovery at the other end of the country: dozens of artificial bodies, illegally dumped near a village where an anti-cyberization sect conducts their training and “rites.” Among the empty shells is one formerly inhabited by the woman who embodied Section 9 until she left it behind and disappeared: Major Motoko Kusanagi…

A delightful gift to every Hiro Mashima fan! Discover HERO’S, the ultimate crossover, the new manga that brings together wizards, warriors, and spacefarers from every corner of the Hiro Mashima universe, including characters from FAIRY TAIL, RAVE MASTER, and EDENS ZERO. This is Mashima’s victory lap! Don’t miss it!

Who will love it: Fans of manga like Naruto, Magi, or The Seven Deadly Sins looking for their next shonen action series.

The new shonen action manga from the creator of Magi is here! Musashi is a teenager living under demon rule. As children, he and his best friend made a promise: to become the greatest warriors in the world and overthrow the demons. But life intervenes, and five years later, he finds himself about to become a miner. Yet can Musashi truly be satisfied with a “normal” life?

Who will love it: Fans of monster-girl romance manga like Sankarea and Actually, I Am…/My Monster Secret.

Makie’s a boy in love, with his tall, older classmate Sachi. As a sign of his affection, he makes Sachi a special lunch every day. Sachi loves Makie, too, but she has a secret… she’s actually a shapeshifting monster called a watari, and she was drawn to Makie because he smells…delicious! But it’s not just Sachi who’s drawn to Makie’s scent, and soon, he realizes the entire monster world is after him. Fortunately, Sachi’s a watari who eats watari, and she pledges to protect him. But how long can Makie survive, with Sachi’s appetite the only thing between him and a monster’s belly?

Shikimori’s Not Just a Cutie 1
By Keigo Maki

Who will love it: Fans of recent high-school romcom manga like Komi Can’t Communicate and Don’t Toy With Me, Miss Nagatoro.

Shikimori seems like the perfect girlfriend: cute, fun to be around, sweet when she wants to be… but she has a cool dark side that comes out under the right circumstances. And her boyfriend Izumi loves to be around when that happens! A fun and funny high school romance with a sassy twist perfect for fans of Nagatoro-san and Komi Can’t Communicate!

That Time I Got Reincarnated as a Slime: Trinity in Tempest 1
By: Tae Tono
Created by: Fuse
Character designs by: Mitz Vah

Who will love it: Fans of the That Time I Got Reincarnated as a Slime manga, light novel, and anime series eagerly awaiting season 2 to debut this fall.

The new spinoff manga to the hit fantasy isekai series, developed by original creator Fuse! Against the odds, the little slime Rimiru has established his magical kingdom for all monsters, called Tempest, and it’s thriving. But three visitors, Phos the fox girl, Stella the dragon girl, and Frey the winged girl, come to pay Tempest a visit, they’re stunned at just how quickly it’s developed. Don’t miss this new story in the world of Slime, just as the second season of the anime arrives!

Those Not-So-Sweet Boys 1
By: Yoko Nogiri

With a Dog AND a Cat, Every Day is Fun 1
By: Hidekichi Matsumoto

Who will love it: Readers of all ages and animal lovers

Pretty Boy Detective Club:
The Dark Star that Shines for You Alone (Novel)
By: NISIOISIN

Who will love it: For YA and Josei novel readers, and fans of NISIOISIN’s hit BAKEMONOGATARI, Zaregoto series and KATANAGATARI.dr

Mayumi Dojima, a second-year student at the exclusive Yubiwa Academy middle school, has lost something – a star she glimpsed just once, ten long years ago. But help is on the way, in the form of the unofficial, secretive, and thoroughly mysterious Pretty Boy Detective Club! Rumored to solve problems within the school (most of which they themselves may well have created) for reasons aesthetic rather than financial, these five gorgeous boys sweep Mayumi into their world of excitement, danger, and overwhelming beauty. So begins the thrilling new mystery series from renowned author NISIOISIN!

About Kodansha USA Publishing, LLC
Established in New York in 2008, Kodansha USA Publishing (KUP) is a subsidiary of Kodansha, Japan’s largest publisher. Its manga imprint is Kodansha Comics, which began by releasing Katsuhiro Otomo’s Akira and Shirow Masamune’s The Ghost in the Shell. Today, thanks to hits like Attack on Titan, Sailor Moon, Noragami, and FAIRY TAIL, it is now the No. 2 manga publisher in the United States by revenue. Kodansha Comics is distributed by Penguin Random House Publisher Services. http://www.kodanshacomics.com