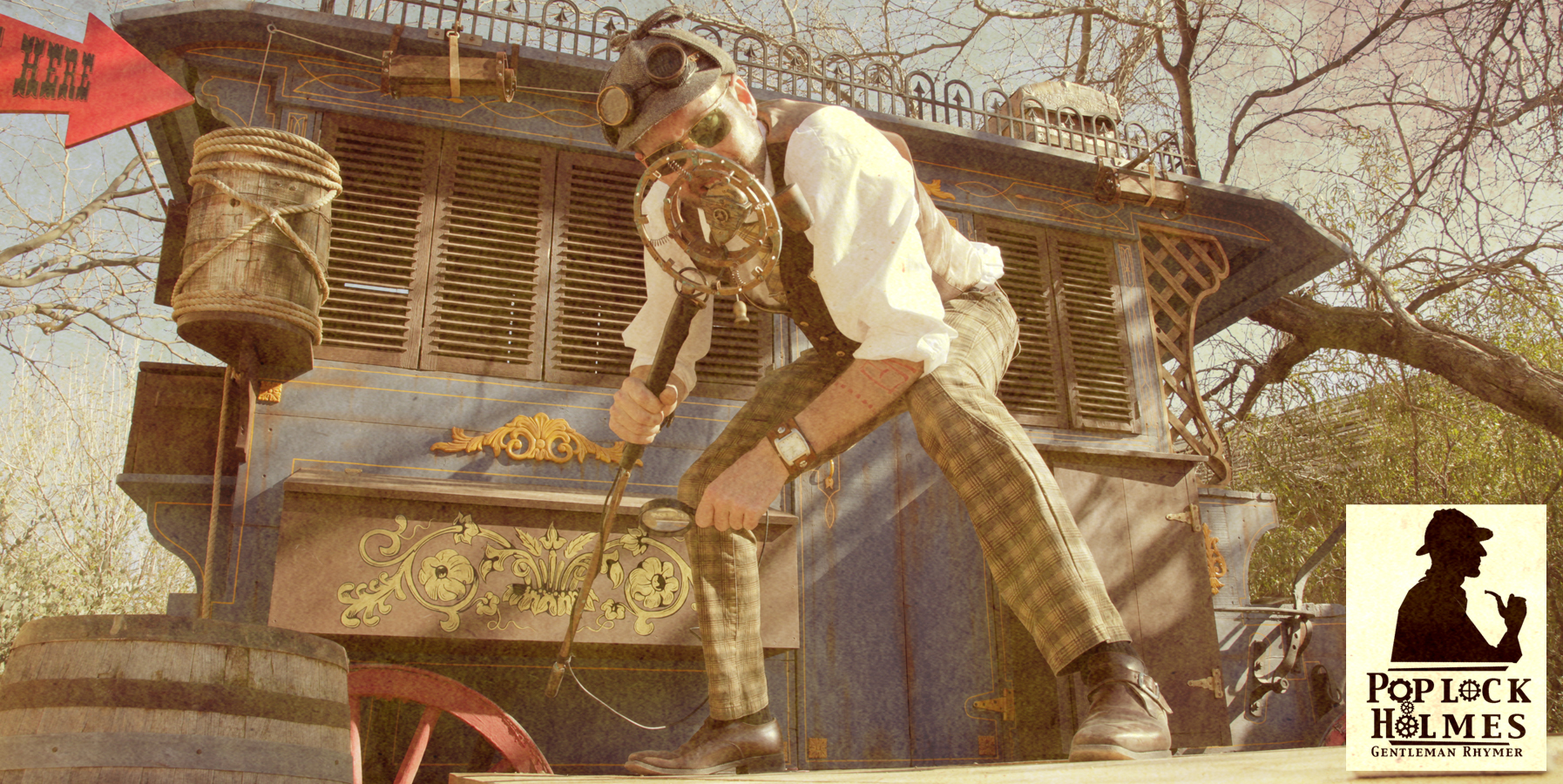 The beats, the lyrics, and the energy: Hip-Hop is one of those art forms that instantly makes you want to tap your toe to the beat. What Hesperia native Poplock Holmes has in store for his first CD outing is a bit different: the Steampunk infused Chap-Hop. With your help, his Kickstarter project for his first EP, RUN DM STEAM, will bring Chap-Hop to not only the High Desert, but to the United States as a whole. But what is Chap-Hop, and what is Steampunk for that matter?

Steampunk is widely known as a sub-genre to science fiction, which focuses on the Victorian Era as well as the advancement of steam powered technologies rather than machines fueled by other means.  IBM named Steampunk as Fashion’s Biggest Trend for the next three years, as the fan base continues to grow. Poplock Holmes offered a great explanation as to what Steampunk boils down to: “Steampunk has really no purpose except its only purpose, and that is to inspire creativity. It’s the only historical reenactment world that has no boundaries.”

In an interview with High Desert Daily, Poplock Holmes met us at a local eatery, decked out in character to explain what Chap-Hop is. The smiles and the turned heads from what Holmes, whose real name is Jerrold Ridenour, was wearing were priceless. Goggles sat atop his head, with leather pouches holstered on his belt and looking like he just walked out of the Victorian Era, which makes sense given the nature of the Steampunk infused Chap-Hop.

As Holmes told us, Chap-Hop is gentleman rhyming, a Victorian themed version of Hip-Hop. Holmes had always been into the Hip-Hop scene as well as the Steampunk culture, but after recording his first song “Pass the Tea”, he began to pursue the career of the first ever Chap-Hop artist in the United States. “It’s been a long time in the making. It started with a song I did two years ago called “Pass the Tea”, and I posted it up on YouTube. I had heard of Chap-Hop, there are two guys in the UK doing it. I cranked out five songs for the first run I did in Tucson at the Wild West Fest there. So I thought, ok, it is time to take this to the next level.”

With his current Kickstarter project, Holmes offers people a way to pre-order a CD, which in turns helps to make the project a reality. “I had done some Kickstarter projects in the past that were successfully funded. I am not necessarily trying to profit from the Kickstarter, but here is a way to sell advance copies of the CD, offset my cost, and come in to this thing at a sort of zero deficit, with hopefully a few CDs left to sell at shows.”

To check out Holmes’s Kickstarter project, RUN DM STEAM, head over to his Kickstarter page at http://www.kickstarter.com/projects/jerroldridenour/poplock-holmes-ep-run-dm-steam. For more information on Holmes, you can visit his website at www.poplockholmes.com.