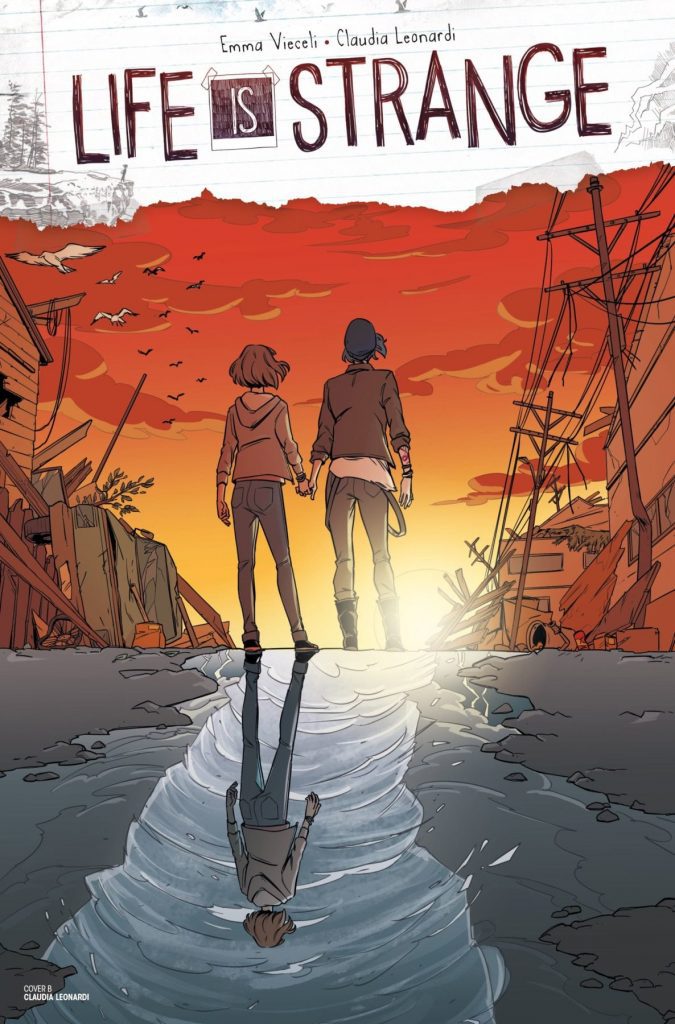 If you’ve been following my game reviews, or know anything about me at all, you’re probably aware of (and tired of hearing about) my deep love for the Life is Strange series. Choice, and how that choice affects the world in strange, and sometimes, devastating ways was one of the many things that made the series so fantastic. Every episode left you lost, deep in thought, wondering how things could’ve played out differently had you done things a little differently. On top of an amazing story, the games also can create an unforgettable atmosphere using sight and sound in ways that would stir up emotions in even the most stone-hearted among us.

I must admit, I questioned why the attempt was even made trying to go from an interactive journey with a fantastic score to a comic. Everything that made it great seemed impossible to continue in this medium, but now I’m glad that I was given a chance to experience the next step in Max and Chloe’s story.

Spoilers ahead, so unless you can turn back time, continue at your own risk! The “Dust” arc was released over 4 issues, I’ll be reviewing the entire collection.

Right away I fell in love with Leonardi’s art. Watching the games play out is like observing an artwork in motion, and I could almost feel the emotions and colors taking me, once again, on that same journey. The games are strange, sometimes visually enigmatic, and here the art does a fantastic job keeping that feeling alive by straying away from the norm. Even the music of the game is brought back with lyrics that fit the feel of the story, but possibly a little too well. Almost to the point of being a little cliché at times. The fact your characters point out these moments don’t always make them better, sometimes it just puts a magnifying glass on them.

I feel that justice was done to the characters. Their personalities don’t feel forced or copy-pasted over from the game. Max’s shy, reserved, and compassionate self is trying to figure out precisely what the heck is going on while putting others ahead of herself. Chloe still filled to the brim with all the attitude and teen angst that we’ve come to know and love, and yet her deep love and devotion to her friends are still visible.

Starting off with a quick recap of the game’s possible endings through Max’s signature polaroid photos, we see that instead of choosing to continue one of the conclusions, it’s somehow choosing to continue off of both simultaneously. Set exactly year after Arcadia was destroyed by the massive hurricane born from Max messing with time in order to save her friend Chloe. Max is doing freelance photography work for a band, and Chloe is taking an internship fixing up cars in a garage.

The two are spending time with the band, and seem to have formed a deep friendship with them. It’s clear to this new group that the two girls have been through a lot together, surviving the storm and losing their friends and families in the process, and have still not entirely recovered from it all. Chloe especially is seen to struggle with her inner demons, and who can blame her? She lost her father when she was young, and In this past year, she’s lost her best friend Rachel and her mother.

We learn from a news broadcast that all the dark, seedy business that took place in the games was swept under the hurricane rug, covered up by the Prescott family to save face. That dirt includes their own son’s body and the terrible things that he, and Professor Jefferson, were doing to students at the Blackwell Academy. What I thought were first inaccuracies in the art or story turned out to be hiccups in time for Max as she starts to lose control over her powers. She starts to hear and see things that aren’t actually there. When things get terrible for Max, Chloe decides it’s time to head back to Arcadia Bay and find out how to make things right.

Going back was the last thing either of them wanted to do, believing their home to be in ruins, filled with the bodies of the people they had come to know and love throughout their lives. Part of them is in denial, desperately clinging to the belief that maybe the storm wasn’t their fault. That it was an unavoidable, freak force of nature. A chaotic mess utterly unrelated to the rest of the disorder in their lives. When they arrive, they find the face of Nathan Prescott plastered everywhere, and a restoration project in full effect funded by the family that had caused them so much pain.

The “flickers,” as the temporal hiccups are named, become more frequent and more painful for Max both physically, and emotionally. People and places begin to crossover, multiple realities converging, overlapping on one another. Possible outcomes are revealed for choices that were never made, and people who died because of the choices Max did make, appear to her. Cloe and Max work hard to try and figure everything out together, and their uplifting scenes together are genuinely touching. They hold each other up through the thick and thin of it all, but when it proves to be too thick for them to handle, Max takes matters into her own hands.

We see Max enter a “place” she refers to as “The Transect,” a sort of collection of windows into possible futures. She decides to not decide, and that she would turn the choice over to Chloe’s idea of a happy future. Where before Max and Chloe were together, now Chloe is attending the Arcadia Bay memorial service alone, possibly implying that Max had chosen instead to sacrifice herself to the storm. That theory is debunked pretty quickly, possibly only one ending to this comic, because the actual ending reveals all three girls, Max, Chloe, and Rachel on a beach, and for some reason, Chloe seems surprised to see Max.

With so much going on near the end, the pacing felt a little rushed, and I find with time traveling it’s best to kind of go with the flow. It might be too early to start trying to guess why Max did what she did, or where this could lead the story. Not that I could imagine even if I wanted to. If you’ve played Season 2, then you’re probably aware that there are some inconsistencies in the story, especially surrounding Arcadia Bay. In the game, had your choices led to the city being destroyed, you’ll remember there was never a restoration project ongoing. The city remained destroyed. When I say inconsistencies though, I don’t mean inaccuracies. Again, time travel makes attempts at playing the guessing game feel as pointless as trying to actually perform time travel.

I’m very interested to see where volume 5 takes us, I absolutely enjoyed reading this and feel that Emma Vieceli, Dust’s writer, respected the series as a whole. Highly recommended to fans of the games. I can’t really recommend it to people who haven’t played the game. Though it does a decent job of recapping events, you’ll still feel lost. That being said, the game is also fantastic, and you should go out and play it right now!