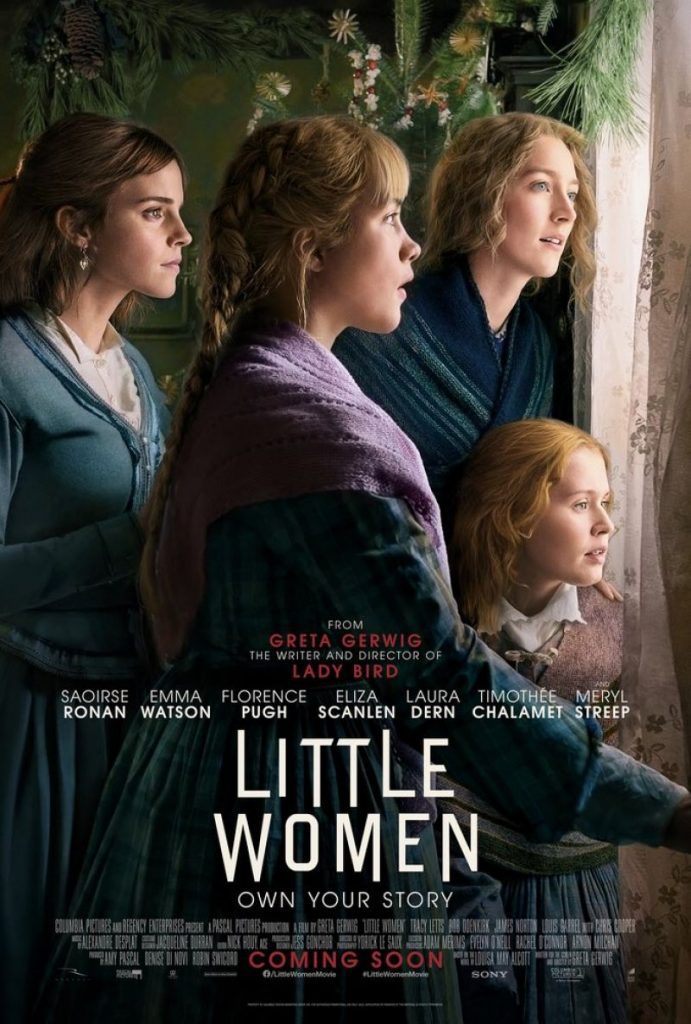 In 2017, actress and writer Greta Gerwig released her directorial debut, Ladybird. The coming of age story, starring Saorise Ronan and Laurie Metcalf, was met with incredibly positive reviews and was a box office success. Eyebrows were raised when it was announced that Gerwig would follow up her debut with an adaptation of the Louisa May Alcott novel, Little Women. In the seventh adaptation of the book, there wasn’t a doubt that Gerwig would do justice to the source material. What had people confused was the fact that she was going to make another version of a story that most people already know and love, and was going to make it her next directorial effort.

But if anybody can pull it off, it was Gerwig, and it’s a good thing that she took the story and made it her own.

For those of you who don’t know, Little Women is the story of the March family, mainly the four sisters Jo (Saoirse Ronan), Meg (Emma Watson), Beth (Eliza Scanlen), and Amy (Florence Pugh). Their mom Marmee (Laura Dern), is trying her hardest to keep the family afloat while their father is off fighting for the Union army. Next store lives their rich neighbor Theodore “Laurie” Laurence (Timothee Chalamet) and his grandfather. The two families become close, and relationships grow throughout a story of chasing dreams, finding love, and figuring out how to make your own path.

Set during the Civil War, Little Women is a romantic story, but a family drama at its core. It’s also a very empowering story. Released in 1868, not long after the war ended, it was a revolutionary book that many consider being the first novel to portray the “All American Girl,” one who had more self-worth than society allowed them to. It’s a story that validates self-worth over wealth, and one that was about women escaping the gender confines that they knew all too well. These themes have carried over well in all versions of the story, whether it be for screen or stage, and this film is no different.

On top of a compelling story, the film also boasts an incredible cast. Ronan, Watson, Scanlen, and Pugh have incredible chemistry with each other. Florence Pugh is especially a standout, she’s been on an astonishing journey lately, and I look forward to where she is going in the future. Laura Dern is always a welcome presence on screen; she brings warmth to her roles, one that a lot of other actors don’t possess. Chalamet is charming as usual, and Chris Cooper does excellent work as his grandfather.

Her second film as director, Greta Gerwig shows incredible confidence behind the camera. The plot of the story remains the same, but she was able to create something wholly unique and different from the material and tells the story in a way we have never seen before. The film jumps back and forth in time, with the film cutting to flashbacks when least expected. It never explicitly tells you that it is taking place at a different point in time, but you always know it. Whether it be from wardrobe or hairstyles, it grounds you in the time it’s taking place, and it’s very effective.

Little Women is an incredibly charming film. It’s well crafted and made with love and care. It’s a film that takes place in the past, but it feels very modern and relevant. While the film is a tad overlong, it doesn’t take away from the overall experience. It’s filled with great performances, an excellent score, great filmmaking, and a gripping story. The movie may not be for everyone, but they accomplished everything they set out to do. If any aspect of the story appeals to you, I highly recommend checking it out.