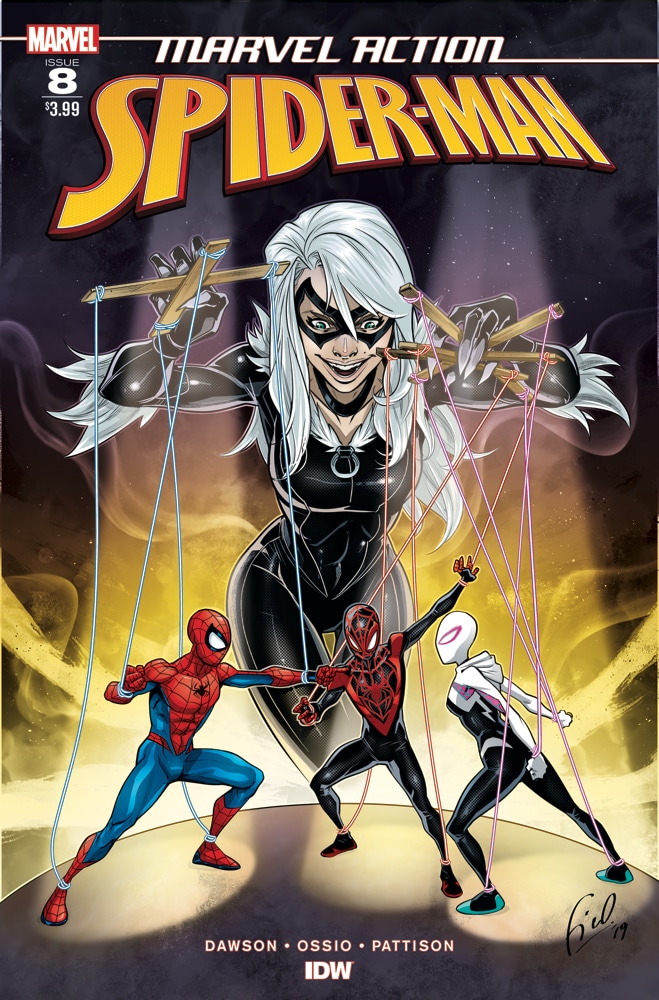 Right off the bat, the cover to Marvel Action Spider-Man #8 leads me to believe that there is more to this story than meets the eye and I am eager to find out if my original quanderings have merit. A good Spider-Man story never disappoints, will this one prove this to be true?

From Delilah S. Dawson, Fico Ossio, Ronda Pattison and Shawn Lee, the issue focuses on a myriad of spider-people. One of the characteristics of Spider-Man is that when he is not in costume, he is an everyday person. The beginning of this story follows right along this same line as we see Peter Parker, Gwen Stacy, and Miles Morales as they all think about a mission all three of them failed the night before.

We see Miles Morales as he meets with his friend Ganke to give him an autographed photo of Spider-Man. However bad luck arrives preventing Miles from gifting Ganke. While in the hospital, Miles is texting with Peter which leads to a nice and satisfying transition from Miles to Peter as we see him in costume web-swinging around as he wonders what Miles meant in his last text message. Classic Spider-Man with his spider-sense not working right and also have malfunctioning web-shooters. Things aren’t looking up for our hero when he also causes problems for someone else’s life he hadn’t expected to cause problems for.

We then find ourselves in the candlelit bedroom of “Ghost-Spider,” which is what Gwen Stacy is calling herself. She angrily spits to put out a candle next to her curtains while she climbs through the window to find a “bad guy out there who needs a good rump-kickin.” Soon after she leaves, she sees a rather heated situation in an apartment that looks exactly like hers.

Bad luck continues in the pages of this comic book and wait until you see what happens at the zoo.

I like how this manages to show what these three spider-people do to cope with failure. This shows that despite them having these abilities that separate them from regular people by the extremes, they still suffer from problems and issues similar and even the same as ordinary people. It also manages to capture the confusion involved when someone doesn’t respond, and our minds convince us that something very negative is the problem when in reality there are much bigger reasons as to why someone isn’t able to respond.

The transition from Peter to Gwen brought a stop to the nice flow I had while reading from Miles to Peter. The time with Gwen could have been longer and more drawn out by a couple of panels as it felt like she had not yet gone anywhere when the scene intensified. I also feel like we should have seen more of a conversation between Gwen and her dad. Also, like the lack of transition from Peter to Gwen. The transition to the bad guy of this issue seemed lacking. I would have preferred to see a panel with a classic text to give us a clue we are about to see what the villain is up to.

I do hope that this is all leading up to something big as the final confrontation of the issue left some to be desired, and the way they figured out everything felt like someone rolled a Nat20 on all of their investigation checks.

Overall this issue felt like an extended cutscene right before you play the video game. While I did enjoy reading this and I am overall happy with it, the break in my reading flow removed my sense of immersion and getting lost in the pages. I do look forward to what the future is for this spider trio.