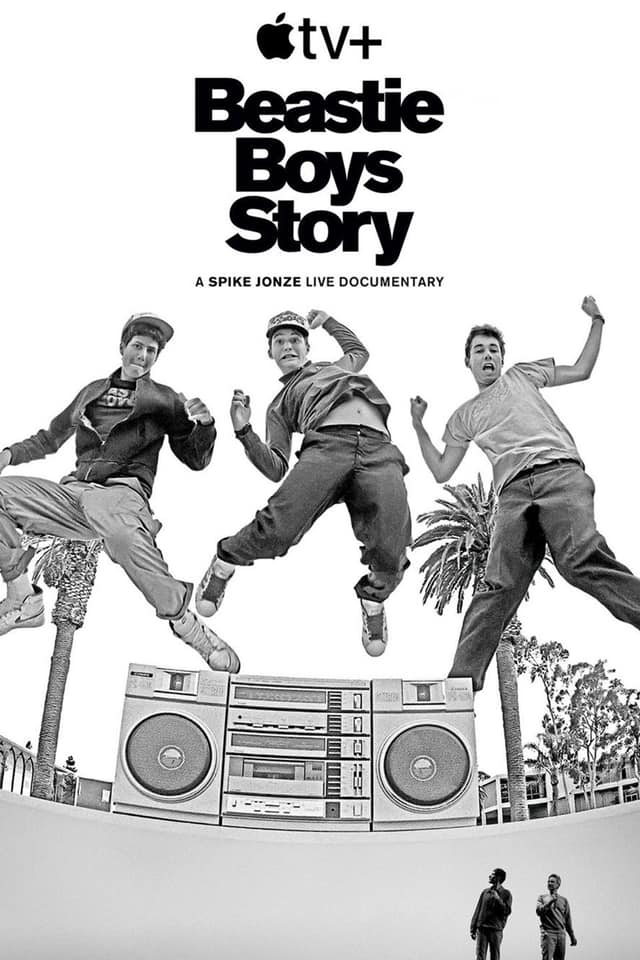 “Now here’s a little story I’ve got to tell,

About three bad brothers you know so well,

It started way back in history,

It has often been said that if a story is powerful enough, it doesn’t matter if you know how it ends. We often go back to our favorite movies, video games and books to experience the journey, even though we know the outcome and often the heartbreak that comes along with it. Anyone who is familiar with The Beastie Boys already knows how their story ends. But like most great stories, this isn’t about how it ends, because the most fascinating thing about it is the journey.

Beastie Boys Story is a live documentary film experience. Filmed during the last stop on their speaking tour, the film combines live storytelling elements with archival footage. Adam Horovitz (aka Ad-Rock) and Michael Diamond (aka Mike D) take the stage with a massive screen behind them and tell the story of the band. From their humble beginnings meeting at a punk show in New York to the death of founding member Adam Yauch (aka MCA), there is no stone left unturned. And all of it is masterfully captured by longtime collaborator Spike Jonze.

Surprisingly candid and brutally honest, Horovitz and Diamond know how to tell a good story. Having known each other for forty years, their chemistry is unbeatable. When embarrassing moments from their pasts are discussed, they aren’t afraid to dig into each other about it, but it’s done in a loving and caring way. They tell each and every moment with reverence and levity, even when the subject matter becomes more serious.

There are plenty of stories told in this two-hour show, some you may know, and some you probably don’t. Their fall out with Rick Rubin and Russell Simmons goes deeper than most people know. Beastie isn’t just a name; it’s a silly acronym. You’ll be forced to crack a smile when you listen to “Fight For Your Right” or “Sabotage” after learning their true meanings. There is also the story of the original fourth member of the group that super hardcore fans know, but I had no idea. Even if you do know it all, you must hear about it from the guys who lived it.

What long time collaborator Spike Jonze has directed here is more than just a documentary, it’s truly an experience. He captures everything that makes a live show special. There are moments where things don’t go as planned, and it’s left in the film for all to see. Much like the story at the heart of the movie, it’s all laid bare for everyone to see.

This live documentary is both a fitting tribute to Adam Yauch (aka MCA) and a wonderful history lesson. It’s never about mourning the death of Adam, but a celebration of his genius and his life. Horovitz, Diamond and Yauch had a role to play in the band, and each one is celebrated. It’s an inspiring and emotional roller coaster, and I’m glad it was captured on film for all to see. Definitely seek it out!