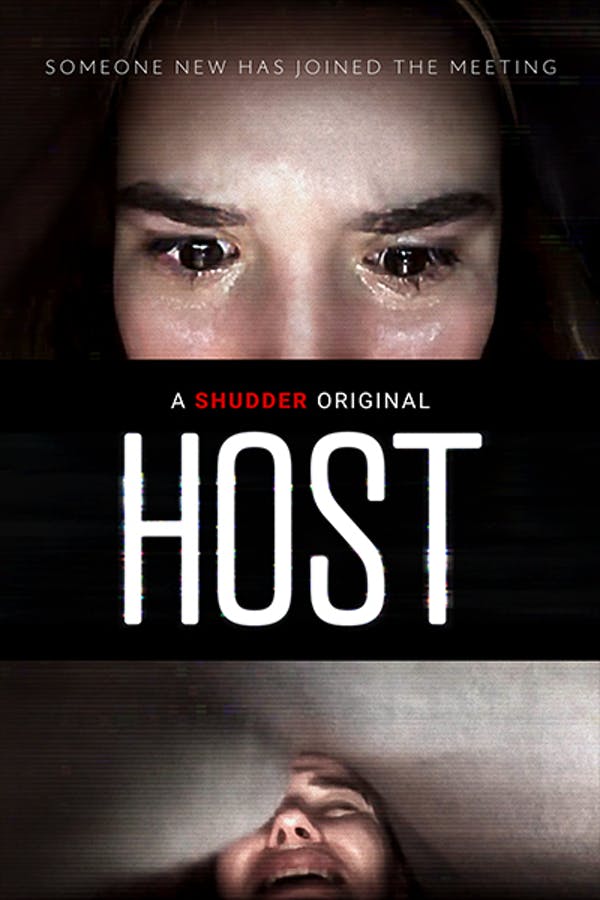 The Shudder original film Host is one of those movies that is truly of its time. It was filmed during the lockdown, and the story is told entirely over the meeting app Zoom. It’s one of those movies that people will look back on years from now and reminisce about the craziness that was 2020. It feels so relevant and modern that it’s almost too anxiety-inducing to watch at times.

I remember reading an article at the beginning of the big COVID lockdown about people living in places that are supposedly haunted. It was about how they were coping with their invisible visitors while not being able to leave their homes. It was a fascinating article, and it left me wondering what that would be like. Not that I wanted to be in their shoes, it was more just curiosity than anything. And while I may never truly understand what it’s been like for those people, this movie gave me a good idea. And after watching it, I can honestly say that I’m happy not to be them.

The film is about a group of friends who meet over Zoom. It’s not just any meeting, though. For some reason, they decide it’s a good idea to hold a virtual seance. The group of friends (played by Haley Bishop, Redina Drandova, Jemma Moore, Caroline Ward, and Emma Louise Webb, all going by their first names in the movie) start out just looking for a bit of fun during the pandemic. Some of them are true believers, especially Coraline, who puts it all together, but the others aren’t as convinced in the paranormal. And it’s that disbelief that causes their worlds to be turned upside down.

Coraline enlists the help of a spiritualist named Seylan (Seylan Baxter) to conduct the festivities, but things quickly go wrong. When one of the girls makes up a story about a spirit that never existed, she unknowingly creates something that will make all of their lives a living hell.

Directed by Rob Savage, Host was conceptualized and filmed during the quarantine. At a swift 56 minutes, the movie manages to be one of the most effective and scary films in recent memory. It’s a cautionary tale about not messing around with forces you don’t understand, while also playing on our modern anxieties of being trapped with nowhere to go.

The “gimmick” of the film certainly isn’t a new one, but it works so well here. Unfriended and its sequel used the multi-screen meeting set up to tell their stories, but this movie feels nothing like those. It’s more in line with something like a Paranormal Activity or even The Blair Witch Project. The type of scares it delivers are ominous, a lot of things hiding in the shadows. There are some jump scares, but the most terrifying part of the movie is the overall sense of dread surrounding them. Imagine being in a dark apartment or home, with nowhere to go, while something you can’t see is stalking you from within. That is what this movie is.

And this movie is nothing without a strong cast. The performances in Host are top-notch. Savage directed the film over Zoom and never worked with the actresses or actors in person. There was no crew either. Everyone was responsible for their own makeup and lighting, as well as having to remember their parts. The whole movie rested on their shoulders, and they pulled it off. Kudos to the entire cast for delivering convincing performances while having to do everything else.

If you have Shudder, you absolutely need to check out Host. At just under an hour, you really have nothing to lose. If you are easily scared, though, you might regret it. Watch it with the lights on while Zooming with your friends.