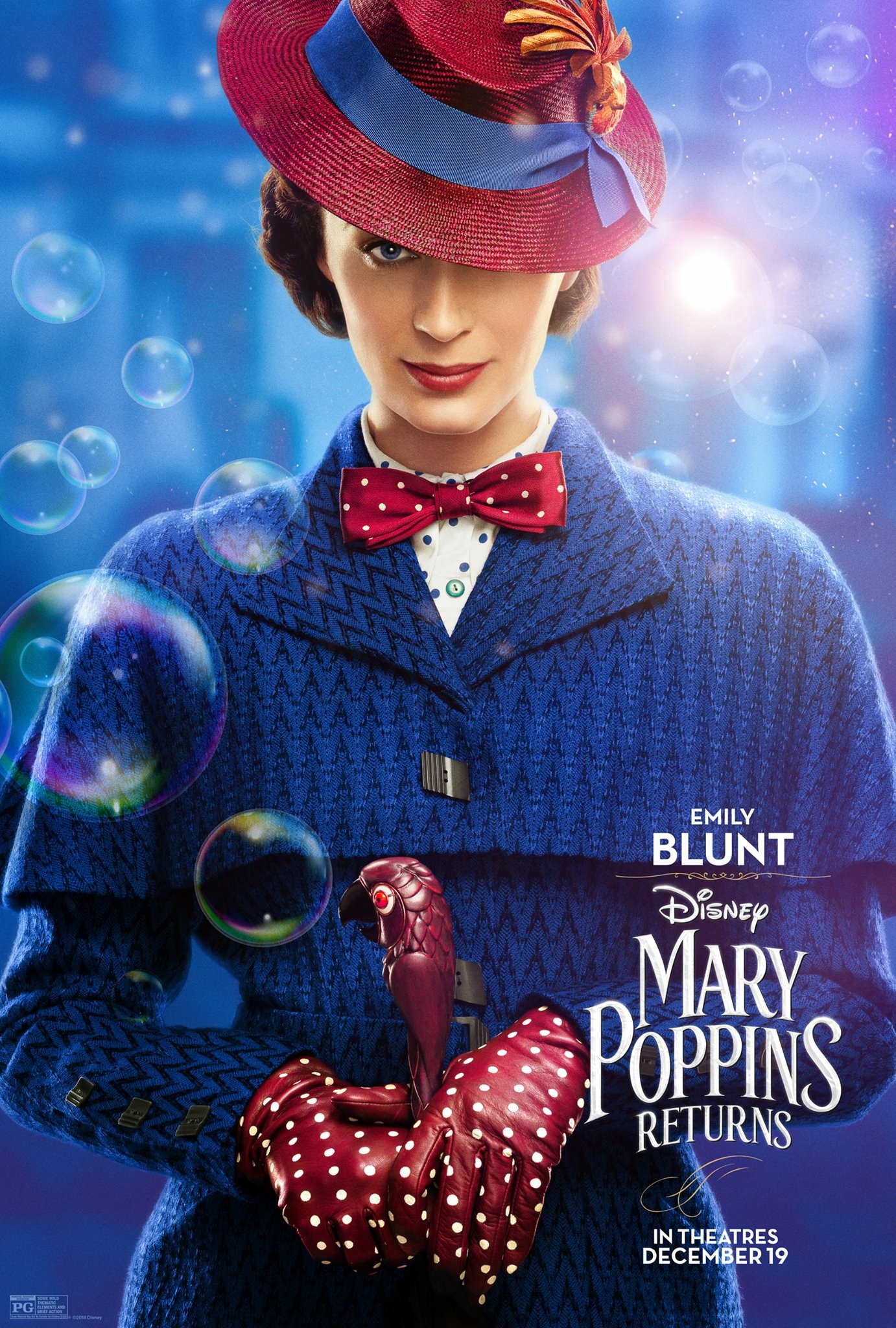 Disney had a lot to live up to when it was announced that the studio was moving forward to a sequel to their classic 1964 film “Mary Poppins”. It’s almost reasonably certain that the pressure was on for the studio, and everything had to be perfect. The casting, music and pure magic that made the first one so great had to be reproduced here. Fifty years later. Was Disney up to the task? Did they strike lightning twice? The short answer to that question is: Yes! They did.

The film directed by Rob Marshall (Chicago, Into the Woods) brings the story of Mary Poppins (Emily Blunt) returning to the Banks family, 25 years after the events of the first film. Recently widowed Michael Banks (Ben Winshaw) is raising three kids with the help of his sister, Jane (Emily Mortimer) and housekeeper Ellen (Julie Walters). When debts he never knew existed catch up to him, his childhood home is in danger of being repossessed unless he can make the deadline and pay up.

It is then when the mysterious nanny Mary Poppins comes back into his families lives. With the help of lamplighter Jack (Lin-Manuel Miranda), she takes the Banks children on a whimsical journey through imagination and shows them the true meaning of family.

There is a lot to love about this film, but I can not stress enough just how perfect the casting is. Julie Andrews left some big shoes to fill, but Emily Blunt fills those shoes perfectly. It’s tough to imagine anyone else in the role after you see this film. Much like Hugh Jackman, going from Logan to The Greatest Showman, she has the range to do anything. Going from A Quiet Place at the beginning of the year, and ending the year with this, it’s a perfect way to encapsulate her talent. She is incredible. As much as I love Blunt, Lin-Manuel Miranda practically steals the show in any scene he is in. With his background in Broadway (Hamilton!), it’s no wonder he is so great at what he does. He was born to do it.

Everyone else in the film does such an incredible job holding their own. The Banks family is perfectly cast. Ben Winshaw and Emily Mortimer are fantastic as brother and sister. Pixie Davis, Nathaniel Saleh and Joel Dawson do an excellent job rounding out the family as Michaels three children. There are also some great surprises along the way, but I won’t ruin those.

The movie has an old-fashioned feel to it. While watching, it, I caught myself thinking about how we never see movies like this anymore. Much like the original film, there are sequences that blend hand-drawn animation and live-action, and those scenes are incredibly well done. If you are a fan of hand-drawn animation, it will make you wish they would bring back the medium. It all just looks so beautiful.  The music in the film is all original, and it’s one of the greatest soundtracks I have heard in a long time. The songs are catchy, and they will stay in your head long after the movie is finished. The dance sequences are top-notch, almost to the point of being mind-blowing. All of this put together makes for a stunning film.

What Disney has done here is make a movie that is more than just a play on nostalgia. Although it will bring back great memories for some, it doesn’t rely on that. “Mary Poppins Returns” is a beautiful film that stands on its own. If you’re not a fan of great filmmaking and musicals, this movie won’t make you one. But if you are, or if you’re willing to give it a chance, you will walk out with a giant smile on your face. The film is practically perfect in every way.