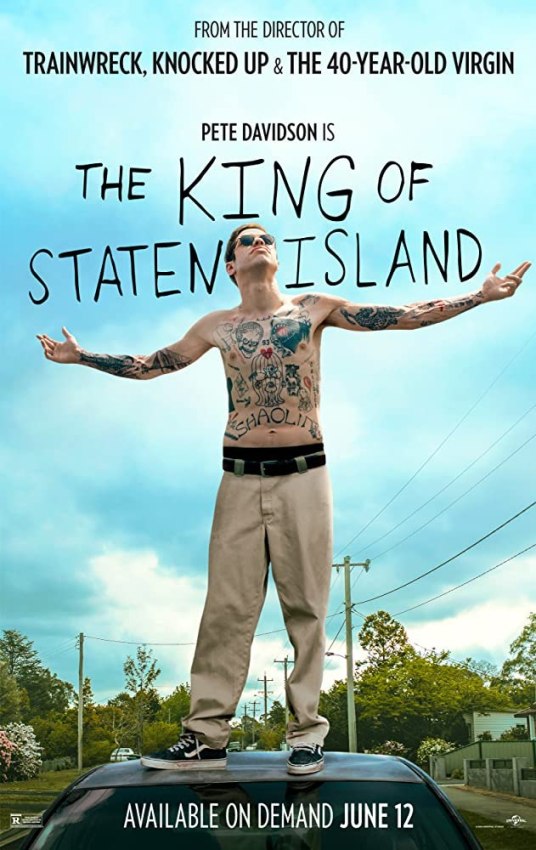 Judd Apatow’s latest film treads familiar territory, but in a more mature way. Like most of his films, the protagonist is a grown man child trying to figure out where he fits in his own life and the world around him. With a strong performance at its core, it’s a must-see for fans of Apatow as well as fans of its charismatic leading man, Pete Davidson.

In this semi-autobiographical story, Davidson plays Scott, a 24-year-old high school dropout and aspiring tattoo artist. He lives with his mom Margie (Marisa Tomei) and younger sister Claire (Maude Apatow) on Staten Island. Their father, Stan, a firefighter, died when Scott was young, which left a lasting effect on him. With his younger sister leaving for college, it becomes clear to everyone but Scott that he needs to figure out his life before it’s too late. He also confronts the reality of who his father was, which helps him learn more about himself and life in general.

Apatow’s first narrative feature since “Trainwreck,” The King Of Staten Island is pretty much exactly what you would expect. With the exception of the darker tone, it’s still his style through and through. It shares more DNA with Funny People than Knocked Up. It’s dramatic when it needs to be, but also very funny and moving at times. But also typical of his films, it’s a bit longer than it needs to be. There are certain scenes that didn’t need to be left in, but it’s not a huge distraction from the overall narrative.

The movie has a lot to say about PTSD and how the loss of a loved one can affect your life. The story mirrors leading man Davidson’s life, and he conveyed every aspect of that pain perfectly. He is essentially playing himself, so I hesitate to call it a performance, but he is incredible to watch. Known mainly for his role on Saturday Night Live, he’s charismatic and very funny. There’s something magnetic about his childlike attitude that instantly draws you in and makes his character relatable. You definitely know this guy in real life, or you are this guy, and you want to see him succeed.

Through Scott’s interactions with the people around him, his life starts to shift. It’s never caused by any of his own doing, but by circumstance and being with the right people. It’s an interesting direction to take and works so well in this film. He never chooses to create a better life for himself, so he’s not the hero in that sense. The person most responsible for his growth isn’t his mother or sister, but Ray, a fireman who starts to date his mom. Played by Bill Burr, he is exactly what Scott needs in his life. His mother has coddled him his whole life, and Ray is a no-nonsense, straight-up “grow the F up!” type of guy. Sometimes, that’s the kind of person we all need. The rest of the supporting cast is terrific also, especially Steve Buscemi, who plays a fire chief who knew Scott’s dad.

Written by Apatow, Davidson, and Dave Sirus, The King Of Staten Island is one of Apatow’s best. Although the movie features one of his most immature protagonists, it’s his most grown-up film. Everything from its themes to the way the film looks shows how much he has grown as a filmmaker, and he was already established early on, so that’s saying a lot.