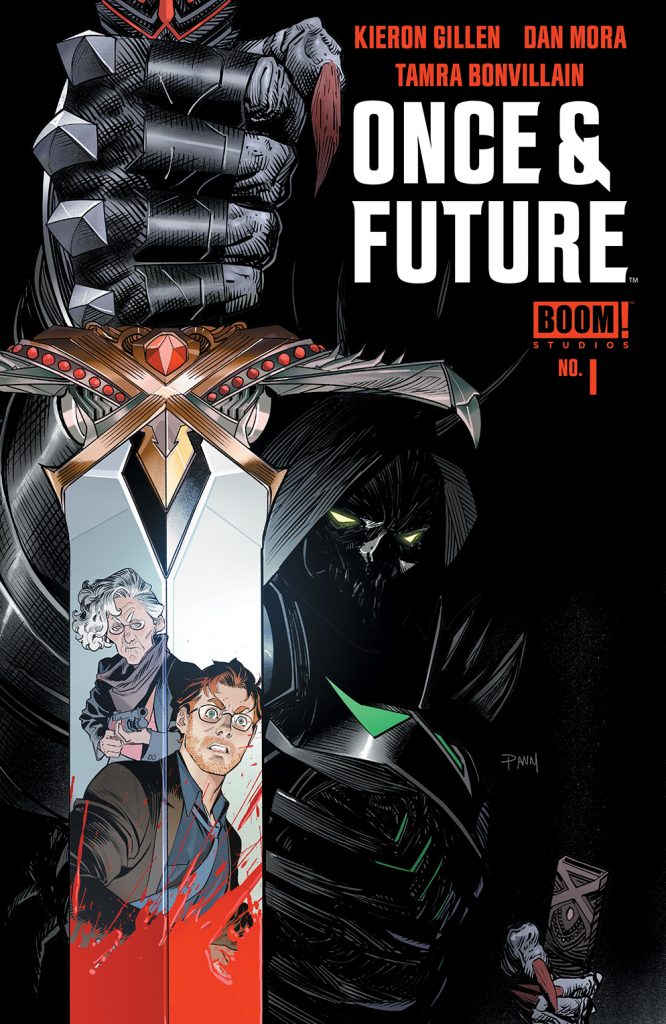 One book that has been garnering a lot of buzz this week comes from Boom! Studios: Once & Future. Monster hunters, Great Britain, and the legend of King Arthur and Excalibur- what is not to love?

From Kieron Gillen, with art by Dan Mora and colors by Tamra Bonvillain, Once & Future introduces us to Bridgette, an older woman living with a secret. To some, she is a resident at a senior facility, but to others, she is a hunter of vampires and other beasts. So when she goes missing after hearing about a mysterious murder and a lost artifact, her grandson Duncan enters the picture. Sheepish, socially awkward, and unaware of his Gran’s legacy. But when a monster rears its head, and Excalibur is stolen, leaving a prophecy in place that could doom Great Britain.

Gillen has crafted so many amazing books like The Wicked + The Divine and Peter Cannon: Thunderbolt, and Once & Future looks like it will be another fantastic series. His way of creating characters that connect and resonate with readers, and with Bridgette and Duncan, I can only imagine the depth we will get from these characters. Mora, who has done fantastic work on Klaus and Mighty Morphin Power Rangers, creates some beautiful scenes with Bonvillain providing the eye-popping colors. The character designs, the monster designs, they all look superb.

I love this debut issue. Once & Future takes the fantastic mythology tied to King Arthur and infuses it with the family monster-hunting legacy hijinks we know and love from shows like Supernatural. Gillen, Mora, and Bonvillain have kickstarted something special here, so make sure to get in on the ground floor of this one.