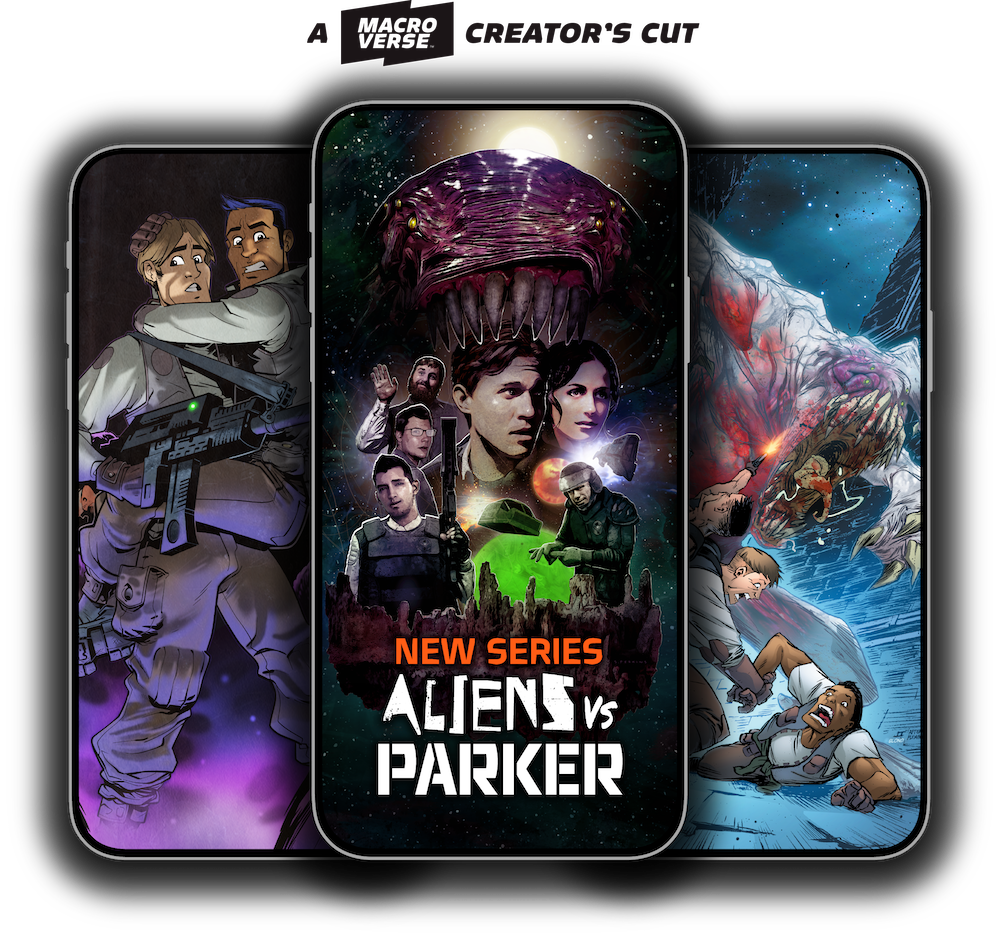 As long-term writing partners and lifelong comic book fanatics, Scheer and Giovannetti have written for some of the world’s most revered comic book franchises, including Marvel’s Ghost Rider and Ant-Man. Having conceived Aliens Vs. Parker together as their entrance into the world of Comics, the duo is now utilizing the creative freedom of the Macroverse TapStory format and publishing platform to revisit the original story from top to bottom and release a new version with more laughs, adult themes, and over the top tongue-in-cheek humor than ever before.

Set in the not-so-distant future, the story follows a group of deep space slacker delivery guys spending their days doing what they always do: getting sent all over the universe to mindlessly load and unload cargo bays. In the hierarchy of cool space jobs, these guys are on the bottom rung. Their only relief is playing WARFIGHTER, a massive multiplayer online game, against punk kids from back home and seeing if there’s anything good to eat in the mess hall. That is, until they have to deliver a package marked “classified” to a planet more dangerous than they’ve ever faced before. The rag-tag team of slackers, malcontents, and gamers are then forced to put all their skills (or lack thereof) to good use simply to stay alive.

“Coming up with AVP was the first time Nick and I attempted writing comics. It was an amazing experience, but we’ve both grown so much since. This was a great way to go back and polish the things that bugged us and also give people a completely new way to experience this story,” said Scheer. “As a comics fan, the Macroverse app really gets me excited to bridge that gap between comics and film.”

“I guess I’m having my George Lucas moment, as someone who’s always railed against special editions, I think our ‘Creator’s Cut’ is actually very different. This isn’t changing the art, the story, or adding panels; this is allowing the story to be read in a brand-new way. I think of it as a companion piece to the original book that lets you experience it the way we always intended it to be read and seen,” said Scheer.

“Like Paul, I’m also having my George Lucas moment. I want to replace the people in my life with robots, but that’s got nothing to do with AVP,” said Giovannetti. “What I’ve specifically enjoyed about this experience is how the Macroverse format allows you to do things you can’t do anywhere else as a writer. You can create tension within a panel. You can control how a joke is delivered. There is a sense of rhythm and timing to it that’s really interesting and fun to play with.”

“We’re honored and excited to have Scheer and Giovannetti bring their comedic and creative brilliance to our platform. Our format lends itself particularly well to comedic material in that you can really set up and pay off jokes in a unique way. Readers are in store for an entirely new experience of Aliens Vs. Parker, and we’re thrilled to help bring this to life,” said Macroverse co-founder Eben Matthews.

The Aliens Vs. Parker trade paperback was originally released by BOOM Studios in 2014.