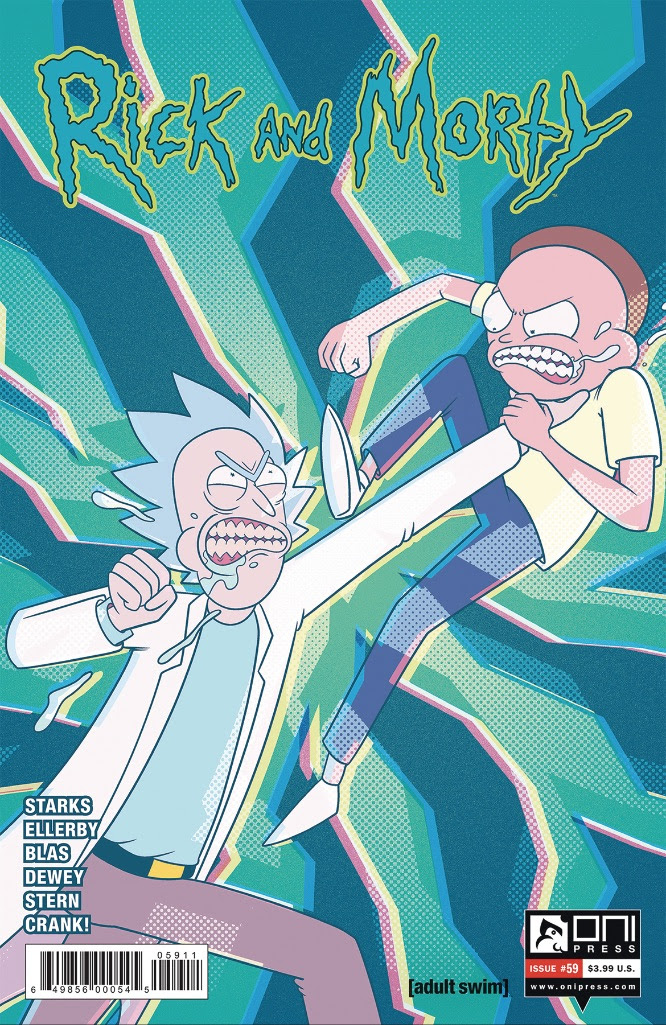 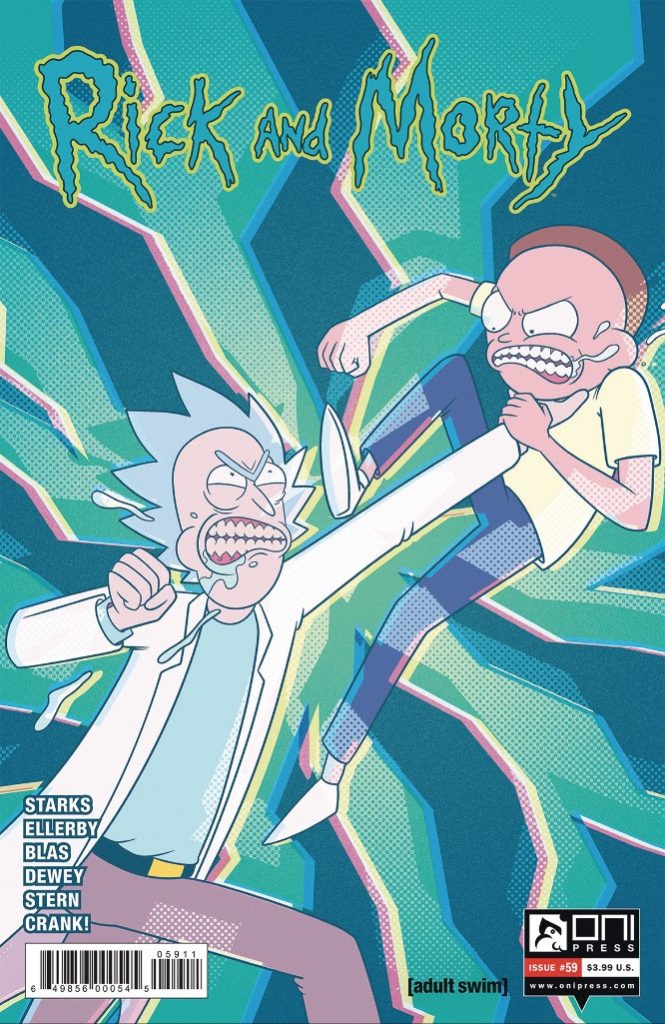 For this review, I am taking a look at Rick & Morty #59 from Oni Press. Written by Kyle Starks with art by Marc Ellerby, Sarah Stern, and Crank!, with another story by Terry Blas, Benjamin Dewey, and Crank!

After a brief prologue, we are shown the garage where we see Rick, Morty, Summer, Beth, and of course, Jerry; all of them are exiting a portal at the end of the previous adventure.

Rick is verbally excited about making it home safe. After a short interaction with Jerry and Beth, Morty bursts into the room, wearing the best armor in the multiverse screaming about killing Rick Sanchez.

Of course, Rick is always prepared for anything and runs over to a panel on the wall opening up to an Iron Man-like suit (it looks like the same one he used in Season two Episode nine ‘Look Who’s Purging’). Nearly killing Armored Morty, Beth convinces Rick not to kill him only for Armored Morty to burst out, attempting to kill Power Suit Rick.

They continue to fight on and on, eventually making their way into the garage where Rick uses his tech to “unwash” Morty’s brain.

A mind freed Morty now confronts Rick about the stuff Rick has brought them all through in the past and how they are all so unimportant to Rick. More fighting between the two ensues only for Beth to throw her shoe in and break up the fight. We are then taken to see what the bad guys are up to, and they sure are planning something diabolical. The rest of the comic is a side story about Rick being Rick and being his comedic self; one thing is for sure if you see a creepy old guy who smells like a dog; do not make fun of him.

If you are a fan of Rick and Morty, then you will get exactly what you are looking for in a R&M adventure. Everything from witty dialogue that feels fresh yet familiar, to action and family drama. It starts out letting us get a glimpse at what is secretly going on behind the scenes and then jumps to the action, which is the primary drive of the comic. The calm and collected Morty taking action as opposed to sitting by and doing what he’s told, and the always prepared Rick getting thrown off by something small that brings Beth in to `save” the day.

I’m always a fan of letting the audience know what the bad guys are up to, but at the same time, I also like to have some mystery and secrets. I get the feeling that there is more going on than what we see, and I love it and cannot wait for the next issue.

The artwork is at its base, a comic book representation of the show. Since it is a comic book, though, they seem to put just a little more detail into what we see than opposed to the show. Everything from the characters to the backgrounds just feels a little nicer to look at generally. Also, with it being a comic book, we can study the environments better for clues and easter eggs, which also means we get to see what the world of Rick and Morty looks like just a little clearer than we already have.

With this being based on the show of the same name, it’s hard to find something I don’t like about it without really nitpicking at the finer details.

The artwork is great for what we get. It’s doing it’s hardest to look like you are reading a comic book version of the show, and that’s exactly what you are getting. It felt at times that some of the characters were slightly out of shape; some things weren’t detailed enough. While this doesn’t happen too often, it is still noticeable if you look at the individual panels long enough. Lastly, towards the end, it seemed to want to go in a certain direction, but it didn’t go that way, which I think would have made for a much more suspenseful comic book.

Lastly, I need to touch on an extra mini-comic that happens just after the ending of this edition of Rick and Morty. It’s called “Mooncakes.” It’s about a werewolf and a witch. They are discussing different kinds of magic. Nothing super exciting happens in this, but I get the sense that something is going on beyond what I have been shown in this issue.

Similarly to Rick and Morty, they use basic artwork only the two and only speaking characters seem interesting and as though they have something going on. Overall this acts like it is trying to start something of its own and maybe even get its own stand-alone issue. If there is something much bigger going on, I would be more on board with this, as it stands currently. I am on the fence about this and will wait and see what we get out of this.

My overall impression of this comic book is that it feels as though I am simply reading a storyboard for an episode of the show. Even with my minor issues, I would happily recommend this issue to any fan of the show who I know likes comic books; in fact, I would tell them to look up the last three issues of “The Rickoning” and also the next and final part to this entire story. If you aren’t familiar with what happened previously, then do not fret because Mr. Poopy Butthole will be there to get you up to speed.