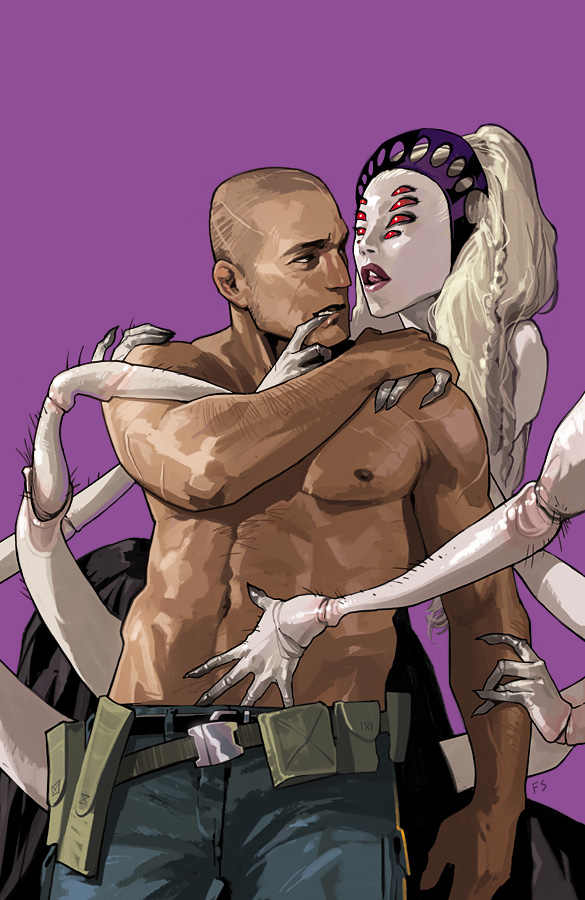 Saga has been, hands down, a runaway hit. From the first issue in early 2012, the book has showed originality at its finest. Brian K. Vaughn and Fiona Staples have created a book that continues to get better and deeper with each passing issue. Usually the leads of the book are the young, wanted couple Marko and Alana and their newborn child, who have lives that seem to get more complicated and dangerous by the issue. But for the ninth installment, the focus shifts to The Will, a ruthless bounty hunter who has his sights set on the wanted family.

The Will has shown that he isn’t a completely heartless killer, as he risked his life to stand up for a young slave girl. This issue follows the grim bounty hunter as he continues to try to save the girl from a slave planet, which is easier said than done. His path crosses with another key character in the book as a grand battle ensues. This mature themed book has never been light on the content, and seeing the battle here is no different. As with the other stand alone issue that focused on him, this book shows why exactly The Will is the man when it comes to bounty hunters in the Saga universe.

Vaughn continues to craft a masterful story, one that throws loops and surprises at the most unexpected of times. Staples is the perfect fit for the title, as her art is a sketchy, modern style that brings the world to life so wonderfully. I honestly can’t imagine another artist on this book, not after the nine issues of pure visual gold she has provided. Though this issue places the focus squarely on The Will, it is still a vital part of the ongoing world. Highly recommended, I give Saga #9 a perfect @@@@@ out of FIVE.