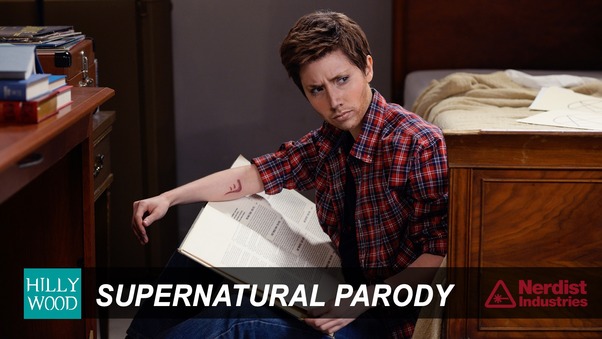 With the Mark of Cain consuming Dean’s soul, it’s time for the Winchester brothers to Shake It Off  in the latest parody brought to you by The Hillywood Show® and executive produced by Nerdist Industries. The devil is in the details of this Supernatural/Taylor Swift mash up written, directed, edited by, and starring our favorite sister duo, Hilly & Hannah Hindi…oh, and practically the entire cast of Supernatural.

The Hillywood Show® is the brainchild of internet celebrities, comedy sister duo Hilly & Hannah Hindi. Each parody features song & dance parodies of blockbuster films such as The Lord of the Rings and Harry Potter along with popular TV shows & celebrities such as Doctor Who, The  Walking Dead & Lady Gaga.  Be sure to check out these mega-talents as they shake, shake, shake on Nerdist.com!

Nerdist Industries is a multi-platform creator of genre and popular culture content. Founded by CEO Chris Hardwick, its online presence includes a website at Nerdist.com featuring Nerdist News hosted by Jessica Chobot; a combined 2.75 million Twitter followers; a Podcast Network including the flagship Nerdist Podcast; The Nerdist School comedy training program; and the Nerdist Alliance, a community of curated partnerships with some of YouTube’s most talented creators. Nerdist also produces content for television including @midnight for Comedy Central. Legendary Entertainment acquired Nerdist Industries in August 2012.

About The Hillywood Show®: