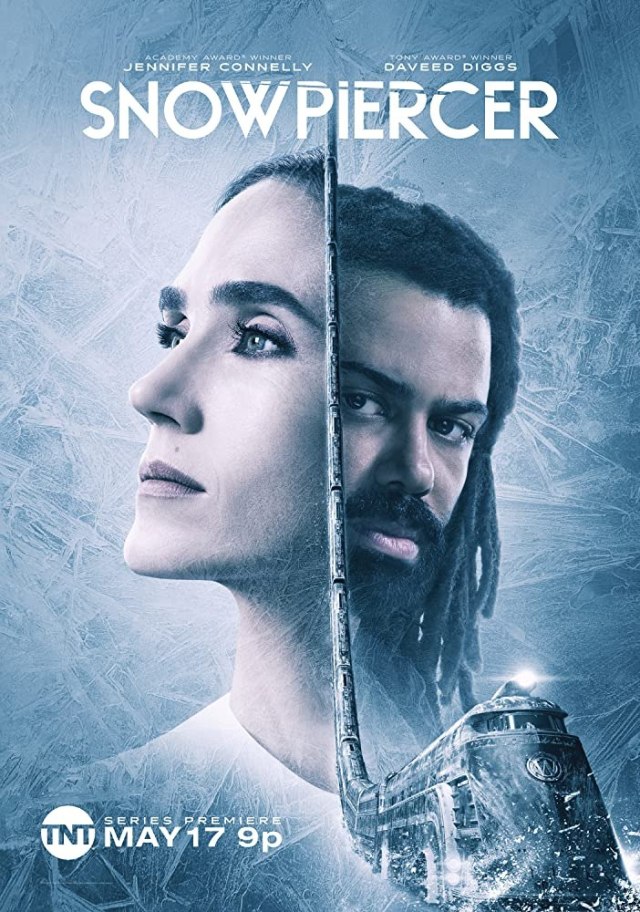 During the early Spring and Summer, TNT aggressively advertised their new action-drama series Snowpiercer. This turned out to be a great move. With the pandemic shuttering production on most fan-favorite shows, Snowpiercer offered a new, exciting series to fill the void. Not only did they fill the void, they knocked the ball out of the park!

Snowpiercer is a television adaptation of the Bong Joon-ho film with the same title (starring Chris Evans), which was a film adaptation of the French graphic novel. While there are similarities between the film and the series, there are also stark differences that make the show unpredictable and exciting.

The premise of Snowpiercer is that through technology, humanity has caused the Earth to enter a deadly new ice age. This ice age dropped the temperature around the globe to the point where the planet is no longer inhabitable. Humanity’s only survivors are huddled together (together, but separate) onto a 1,001 car train called Snowpiercer. This perpetual motion-driven train keeps the remnants of humanity warm and alive (mostly).

So far, everything sounds pretty good for the people on the train, right? For some, yes. For others, not so much. The survivors are broken up into classes ( much like a modern luxury liner). First Class wants for nothing and enjoys open space and countless amenities. Second Class enjoys similar luxuries, but live in less space and have less access. Third Class is the working class. They have limited access to the upper train, but they keep it running. Last is the Tail Section. These passengers did not have tickets to board the train but got on at its last stop to survive the freeze. They live in the back of the train in a ghetto where many freeze and starve.

That is where the similarities between the movie and the show end. This Snowpiercer is not run by Mr. Wilford, but it is run by Jennifer Connelly’s Melanie Cavill, acting as Wilford. While at first, her character is portrayed as an evil, uncaring dictator, her image is softened a bit as the season develops, and viewers get to know her better.

The protagonist to Melanie Cavill’s antagonist is Daveed Diggs’ Andre Layton. He is the leader of the tail resistance and the main character of the story. He is a very likable character because they do not make him perfect. He makes mistakes along the way and has to make terrible choices to sacrifice others, but his humanity is what makes him a great character.

When the series was first announced, I wondered how TNT would be able to stretch the movie’s plot over one or multiple seasons. To do that, they had to change the characters and go deeper into how the train functions and all of the sections. And I would say they did a great job!

The new characters are interesting and likable. They even manage to make Cavill (a character fans should despise) into a sympathetic figure. Fans can see the relief her character feels when she hands the train to Layton after the revolution.

The entire season was well done, but the season finale was the best. How the train rid itself of the Folger family, and the secondary revolt in first Class was very entertaining to watch. Fans were only given a few minutes to relax, though, as trouble came at the end of the finale. Wilford (thought dead) had returned with his own train and captured Snowpiercer. With Cavill’s daughter (also thought dead) as his spokesperson, he announced that he was taking the train.

This exciting finale sets up a new season where Sean Bean’s Mr. Wilford is poised to run the train and wreak havoc on the new status quo. Cavill will have to come to terms with her daughter (who they both thought she had left for dead) likely despising her, and Layton may have to start his revolution all over again.

Rating: FIVE Pastrami Nations out of FIVE. Exciting, dramatic, captivating, and fun! Sign me up for season 2!

Daniel Schwartz has been a Pastrami Nation contributor for over four years. He is a father of 4 and a husband of 1. He is a massive fan of all things Sci-fi and fantasy, including Game of Thrones, Star Trek, and the Arrowverse. You can follow him on Instagram at two sites, @tvnerddude and @arrowverseweekly.