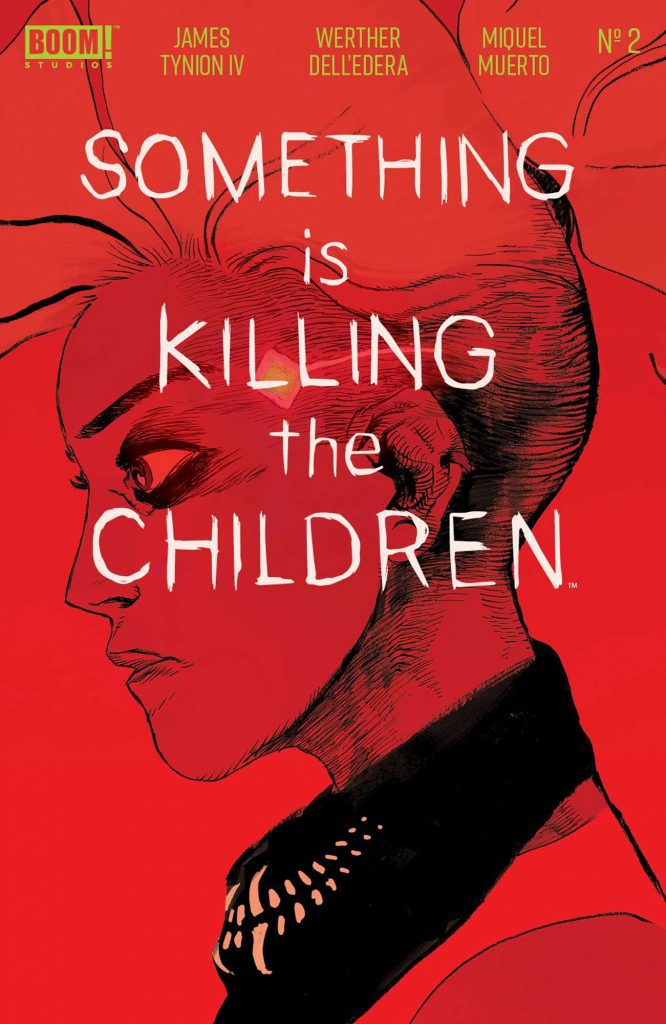 In my review of the first issue of Something is Killing the Children, I raved about the new series that introduces a mysterious monster hunter who comes to a small town being haunted by a monstrosity. With the second issue, we continue to dive into this world of monsters, mystery, and more.

From James Tynion IV, Werther Dell’edera, and Miquel Muerto, we learn about another missing teen in town, this time from the perspective of Tommy, a manager at a restaurant in town. His sister went missing, and his life has been torn about due to it. We see an encounter he has with a monster, except he can’t see it. We then go to Erica Slaughter, monster hunter, and James, the lone survivor of a monster attack that took his friends’ lives. We see Erica and James cross paths with Tommy, where Erica’s awkwardness truly shines. You can tell this is a person more at home with fighting monsters than having simple conversations. We even get a glimpse at some of her battles, which look epic. But the biggest reveal is the little octopus she carries around, and what manifests from it at the end of the book. What does it all mean? Who does Erica keep getting calls and orders from? Why is this monster attack teens, and why now?

This issue pushes the story along nicely while adding in more mystery along the way. Beautiful pacing, beautiful artwork, I love it. We get more human to human tension here than monsters this time, which is fine. It’s all building to something, probably several somethings, which I cannot wait to see. Tynion and crew have crafted an excellent start to a new, original series here. I have been raving about this book since I first read the previous issue, and after reading the second, I shall continue to do so. BOOM! Studios are on fire as of late, and this book is one of the reasons why. It’s still early, get the first two issues and get ready for a new type of monster hunter.

Tags: Something is Killing the Children #2 Review