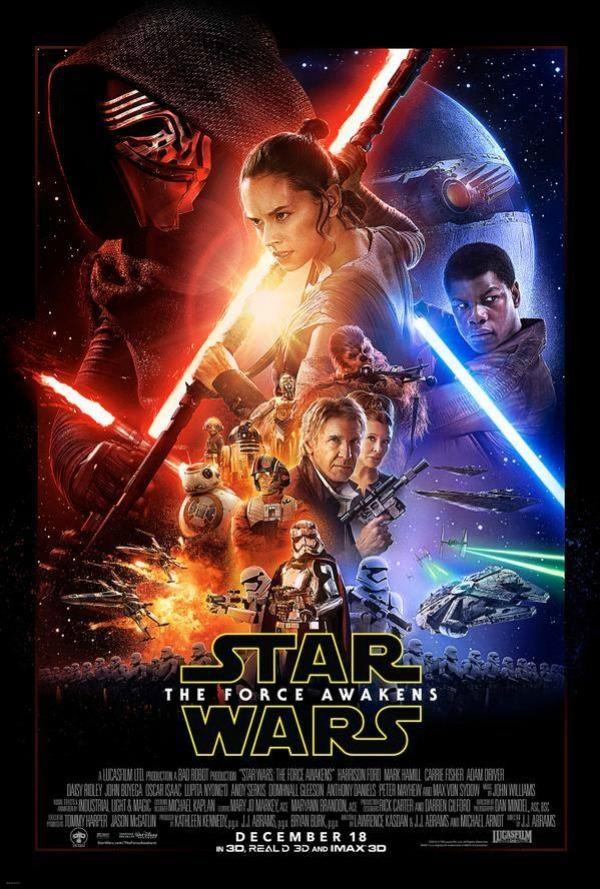 This is Star Wars, all the way.

Directed by J.J. Abrams (Star Trek: Into Darkness, Super 8), this film takes place 30 years after Return of the Jedi- the closer of the original trilogy. The Empire has been defeated, Darth Vader is no more, and the Republic was victorious but a lot can change in 30 years. From the ashes of the Empire comes the First Order- a ruthless regime with Stormtroopers and the mysterious Kylo Ren (Adam Driver). The Republic, now the Resistance, has grown in numbers as well, with hotshot pilot Poe Dameron (Oscar Isaac), droid BB-8, and led by their iconic leader, General Leia (Carrie Fisher). In the middle of this conflict falls the two new heroes, Finn (John Boyega) and Rey (Daisy Ridley), both who end up deep in a conflict of their own on the desert planet of Jakku. With Han Solo (Harrison Ford), Chewbacca (Peter Mayhew), C-3PO (Anthony Daniels), R2-D2, and Luke Skywalker (Mark Hamill), the gang is all here and then some.

Being spoiler free, I won’t give away plotlines or character developments, but rather comment on the nature of the film. For me, one of the major achievements here is that this film felt like a new generation Star Wars film. Not that I am knocking the prequel trilogy but this feels like a true successor to the franchise. Our new heroes find their niches in the universe- with Poe Dameron being the surprise for me. The villains are creepy, scary and definitely evil- even the Stormtroopers are more ruthless instead of being the armored pushovers we remember from the past films.

The designs and special effects are outstanding. We knew they were going to use more actual costumes and set designs rather than green screens in this film, and it shows. The worlds look fantastic, as do the aliens that inhabit them. I love the spacecrafts, mainly the slick, shadowed X-Wing piloted by Poe. The musical score fits seamlessly with the film as well, making for an overall amazing experience.

Walking out of the film, I felt completely satisfied with what I just watched. This is the next generation of Star Wars- no, I think a better way to say it would be this: this is the evolution of Star Wars. Easily one of the best films in the franchise, and of the year, Star Wars: The Force Awakens is a must watch.